Deficit reduction under President Clinton by raising taxes on the rich?

President Obama:  “But as I’ve said before, we can’t just cut our way to prosperity.  If we’re serious about reducing the deficit, we have to combine spending cuts with revenue — and

that means asking the wealthiest Americans to pay a little more in taxes.  (Applause.) That’s how we did it in the 1990s, when Bill Clinton was President.”

President Obama substantially oversells the role of increasing taxes on the rich in reducing the federal deficit.

A graph tells the story of federal government revenue and disbursements during the transition from President George H. W. Bush to President William Jefferson Clinton. 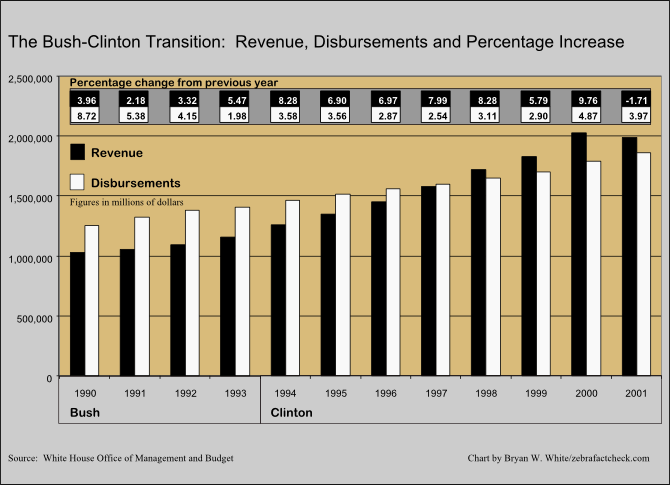 While the chart does show substantial increases in revenue during Clinton’s terms in office, we also see a trend toward increased revenue in 1992 during the Bush administration associated with the strengthening economy.  We also see a flattened spending trend during the Clinton administration, with a maximum spending increase of 4.87 percent in 2000.

What changes in taxation occurred?  The Budget Enforcement Act of 1990 was the first, signed into law by President Bush despite his “no new taxes” campaign pledge.  Yet in 1990 and 1991 we see very modest increases in revenue.  Compounding the problem, revenue in 1989 increased over 1988 levels by over 8 percent without any tax increase. 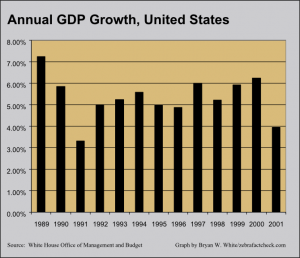 The Deficit Reduction Act of 1993 followed, signed into law by President Clinton early in his first term.  Federal revenues increased in 1994 by 8.28 percent over 1993, slightly more than the 8.26 increase from 1989.  That bill included limits on discretionary spending and a pay-as-you-go structure for congressional spending.

The next changes occurred with the Balanced Budget and Taxpayer Relief Act of 1997.  As the name indicates, the bill included tax cuts.  Primarily, the law exempted the first $250,000 of most existing home sales from the capital gains tax.

President George W. Bush signed tax cuts into law in 2001, but with no apparent effect on federal revenues in 2001.

Consideration of changes to the GDP reveals that the two poorest revenue increases occurred for years with the poorest increase in GDP.  In like manner, the most robust increases in federal revenue correlate loosely with the healthiest increases in GDP.

In principle, higher tax rates will result in higher revenue with all other things remaining equal.  Further, though tax changes tend to result in behavior changes, higher tax rates will result in higher revenue even if all things do not remain equal.  Changes in behavior, however, make it difficult to gauge with precision the impact tax increases have on revenue.  Our charts make it appear that GDP growth has a greater effect than tax increases on federal revenue, at least during the period in question.

The first part of the president’s statement is trivially true in its literal sense.  Revenue is necessary for deficit reduction.  Of course the president was referring to a revenue increase despite the literal words he used.

From the charts above we can see that revenue increases routinely occur with GDP growth, with very robust GDP increases correlating with the biggest improvements in federal revenue.  It follows that the latter part of Mr. Obama’s statement is false, at least to the degree he means to say that tax increases are necessary to achieving increased federal revenues.

It’s possible to apply a very charitable reading to Mr. Obama’s statement.  Perhaps the president is saying that he defines increased revenue as a tax increase on those with higher incomes.  The president’s statement is true given that understanding.

“1993 Omnibus Budget Reconciliation Act.” Slaying the Dragon of Debt: Fiscal Politics and Policies from the 1970s to the Present. The Bancroft Library, n.d. Web. 11 Nov. 2012.

“1997 Balanced Budget and Taxpayer Relief Act.” Slaying the Dragon of Debt: Fiscal Politics and Policies from the 1970s to the Present. The Bancroft Library, n.d. Web. 11 Nov. 2012.