—The Democratic National Committee, ~Jan. 2014 on its “Your Republican Uncle” website

Women clearly affect their incomes through their job choices.  It’s less clear women make less money than men for doing the same job.  The DNC apparently wants people to think the opposite.

In early January this year we noticed the new appearance of four gender issues at the DNC’s “Your Republican Uncle” website, a site the DNC says was created to provide the perfect answers to “the most common myths spouted by your family members who spend too much time listening to Rush Limbaugh.”  The first item on the list declares it a myth that working women don’t make less than working men, and likewise a myth that women simply make different life choices.

The DNC offers this explanation:

Actually, women earn 77 cents to every dollar a man makes. The gender wage gap is real, and it’s hurting American families. That’s why President Obama’s first act in office was to sign the Lilly Ledbetter Fair Pay Act to make it easier for workers to challenge unequal pay.

Most often the DNC uses the White House website as its supporting citation.  In this case, however, the DNC offered support from an article at the Center for American Progress, “Why Women Continue to Make 77 Cents to a Man’s Dollar and the Real Impacts of the Gender Wage Gap.”

We found ourselves immediately pondering how to offer the Republican uncle’s claim a charitable interpretation.  If it is a myth that a gender wage gap exists then there is no reason to try to explain its existence by appealing to the different life choices women make.  We think it makes the most sense to understand the wage gap to refer to differences in pay for doing the same work, even though the Republican uncle doesn’t say that.  With that understanding, the GOP uncle is claiming that women make less than men because they’re choosing things such as different work, different hours and different dedication to their jobs.  And the GOP uncle may have in mind a rebuttal to Democrat claims that a 23-cent gender wage gap is disgraceful in this day and age.

We then encountered the challenge of reconciling our charitable interpretation of the Republican uncle with the DNC’s explanation why the claim is a myth.  The DNC would rebut your Republican uncle by noting “women earn 77 cents to every dollar a man makes.”  But that figure, even assuming it’s correct, doesn’t compare men and women doing the same work.  It compares the median full-time man to the median full-time woman, regardless of total hours worked and regardless of the job.  The Lilly Ledbetter Fair Pay Act won’t help female public school teachers close the gap with male airline pilots.  That law addresses pay disparities between men and women doing the same job.

The DNC confuses its argument further with its citation of the Center for American Progress.  The cited page shows arguments why women doing the same job as men earn less.  It also implicitly says more than half of the  gender pay gap results from women’s choices.

Despite the DNC’s mention of the 23-cent gender wage gap, we believe the DNC is arguing women make less pay for doing the same work as men, and the reason for the disparity is not explained by women’s choices.

We’ll look at whether the Center for American Progress finds a wage gap unexplained by women’s choices and then consider other research that fills in details of the picture.

Why the wage gap, Center for American Progress version 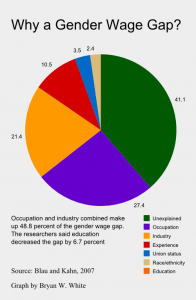 The Center for American Progress rests its arguments on a pair of reports, so we’ll have a look at each.

“What Causes the Gender Wage Gap?” by Jane Farrell and Sarah Jane Glynn

Farrell and Glynn both work for the Center for American Progress.  Their report amounts to a distillation of a 2007 study by Francine D. Blau and Lawrence M. Kahn.  Blau and Kahn found women working full-time make about 76 percent the income earned by men working full-time.  The researchers estimated about 41 percent of the pay gap was unexplained by factors like occupation and industry.  They suggest discrimination may help account for that 41 percent, though the study did not account for differences in hours worked among full-time workers.

This study helps explain the 23-cent wage gap touted by the DNC.  Most of it occurs as a result of women’s choices such as their choice of occupation.  The study brings the wage gap for men and women doing the same job below an estimated 9.4 cents on the dollar, pending an accounting for differences in hours worked among full-time employees.

We’ve already noted that Glynn works at the Center for American Progress.  The website identifies Wu as an intern at the Center for American Progress.  Their report simply notes that the pay gap varies by occupation, just as the title indicates.  The article offers no sign Glynn and Wu considered one key potential reason for disparity the former study examined, namely experience.  Instead, the duo recommends solutions to the pay gap, such as the Lilly Ledbetter Act and the Paycheck Fairness Act.  Notably, the latter bill provides funding for a program to teach women improved wage negotiation skills.

The article by Glynn and Wu ultimately plays up one of the reasons for the wage gap most reliant on personal choice.  It’s far from clear the authors’ recommendations would do anything to make low-paying jobs pay more or to spread out men and women evenly among low-paying and high-paying jobs.  In short, this article doesn’t offer any alternative explanation to the idea that women’s choices put them in lower-paying jobs.

In summary, the Center For American Progress makes a weak effort to identify the causes of the gender pay gap.  It fails to consider some obvious  explanations other than sex discrimination for the “unexplained” 41 percent.

In January 2009, the research organization CONSAD published a report on the gender wage gap, commissioned by the Department of Labor.  That report includes a review and summary of findings of gender wage gap research up through that time.  The introduction by Charles E. James, Sr., deputy assistant secretary for federal contract compliance, sums up the findings relevant to our fact check (bold emphasis added):

Although additional research in this area is clearly needed, this study leads to the unambiguous conclusion that the differences in the compensation of men and women are the result of a multitude of factors and that the raw wage gap should not be used as the basis to justify corrective action. Indeed, there may be nothing to correct. The differences in raw wages may be almost entirely the result of the individual choices being made by both male and female workers.

CONSAD evaluates a number of factors responsible for the gender wage gap, and the report’s Table of Contents provides a concise guide to those factors:

Factors Identified through Decomposition of the Raw Gender Wage Gap

The CONSAD study found a raw gender wage gap of 20.4 cents.  The report said the first six items accounted for all but 4.8 to 7.1 cents of the gap, and other factors such as the three items in the latter group may account for nearly all the rest.  The report also stressed the difficulty of precisely measuring the effects of each reason, since the factors often overlap and affect each other.

We found no newer study that offers the type of comprehensive overview found in the CONSAD one.  Newer studies we found typically looked at each cause mentioned in the CONSAD study without doing much to change the overall picture the study presents.

We’re certain that gender discrimination likely occurs at times.  How much of the raw gender gap occurs from discrimination?  We don’t know, though the most complete evaluations suggest the amount is small.  Moreover, it isn’t clear current legislative strategies do anything other than increase the gap.

We can, however, conclude that the DNC presents a muddled and misleading picture of the gender pay gap.

Considering the context, we think the DNC is saying a 23-cent gender pay gap isn’t explained by women making different choices.  We end up with an unusual case where charitable interpretation makes the statement false.  The evidence says the bulk of the raw gender pay gap is explained by the choices women make.  A small gap caused by discrimination likely remains, but it’s very difficult to measure and perhaps more difficult to fix with legislation.  The DNC makes its argument appealing by a fallacy of ambiguity, presenting the raw gender wage gap explained mostly by women’s choices as a wage gap based on gender discrimination.

Update May 31, 2014:  Today we ran across an article at Journalist’s Resource about a peer-reviewed study that helps explain the slow narrowing of the raw gender wage gap.  Researchers Youngjoo Cha and Kim A. Weedon, of Indiana and Cornell Universities, respectively, offer overwork as the explanation for 10 percent of the gap.  Workers who regularly put in more than 50 hours of work per week are much more often male than female.

Meth, Madeline. “RELEASE: Why Women Continue to Make 77 Cents to a Man’s Dollar and the Real Impacts of the Gender Wage Gap.” AmericanProgress.org. Center for American Progress, 9 Apr. 2013. Web. 22 May 2014.