—Democratic National Committee, Nov. 27, 2013, on the “Your Republican Uncle” website

Fourth in our series on claims from the Democratic National Committee’s “Your Republican Uncle” website, we look at the claim that all of Obama’s new taxes don’t make life impossible for small businesses.  Impossible?  No.  But neither is it clear that Obama’s policies have had a net benefit for small businesses.

President Obama has cut taxes for small businesses 18 times  since taking office, allowing them to grow and create jobs. But remember Paul Ryan’s plan? That would actually cost the economy something like 2 million jobs, which isn’t great for businesses of any size.

The supporting hyperlink leads to the White House website.

We could take the DNC’s claim literally.  If any small business in the United States continues to exist despite Obama’s tax policy, then it’s clearly a myth that Democrats’ tax increases make life impossible for small businesses. 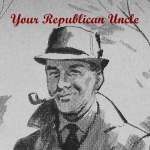 We’ll look at the claimed tax cuts and then try to place Obama’s tax policy in the context of small business performance during his time in office.

The DNC’s supporting link only mentioned two of the 18 claimed tax cuts.  We found a CNN analysis of Obama’s small business tax breaks, totaling 14 after eliminating renewals and expansions, divided into three groups.

CNN said another five tax cuts were still around but weakened.  CNN’s descriptions show four of these cuts now at rates equal to or below what Obama inherited from President Bush.

CNN said four more tax breaks had disappeared, including a break on the employer’s share of the payroll tax when hiring an unemployed person.

So the DNC is padding the numbers a bit.  But at the very least, the tax breaks in CNN’s first group count as legitimate helps to small businesses.

The performance of small businesses under Obama does not necessarily tell us how Obama’s tax policies affected business.  Using data from the Bureau of Labor Statistics, we created a graph showing net job creation by businesses with 1-49 employees compared to job creation by larger businesses. 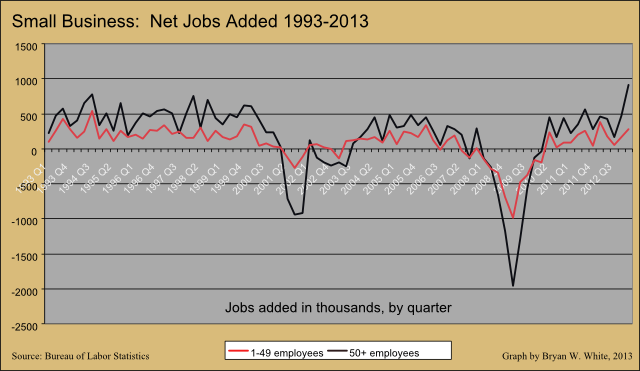 As economist Jared Bernstein has pointed out, small businesses tend to lag behind large businesses in job creation.

We don’t see anything on this graph to indicate a powerful effect from Obama’s tax treatment of small businesses.  Indeed, small business have added more jobs as the majority of Obama’s tax breaks have ended and the economy has strengthened. 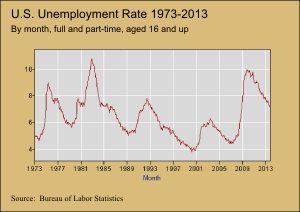 size of the workforce.  Peak monthly unemployment under President Clinton was 7.3 percent when he took office in 1993, already on its way down from a 7.8 percent June 1982 peak under President George H.W. Bush.  Peak unemployment under President George W. Bush occurred during Bush’s last full month in office at 7.3 percent.  Why is this important?  Because high unemployment offers the potential for creating a large number of jobs.  If everyone has a job then the only opportunity for job creation, on net, comes when the number of people looking for work grows. Unemployment had risen to 7.8 percent by the time Obama took office, and eventually peaked at 10 percent in October 2009.

Our charts show relatively steady job growth under Obama since that time, but with a slower decrease of the unemployment rate than was experienced after other recessions.  Is tax policy a reason?

The other side of the story:  Tax increases on small business

So far as we can tell, there is no cold hard fact of the matter on the net effect of Obama’s tax policy.  Critics will point to sub-par growth of small business jobs and poll data showing small business owners identifying taxes as a top concern.  Supporters may counter that slow small business growth is limited by factors beyond the president’s control, and the tax policy would show strongly positive effects if not for those problems.

We’re confronted by one of the challenges of judging the success of economic theories:  They’re hard to test definitively.

Some fact checkers survey a group of experts and look for a majority or a consensus and offer a factual judgment based on that alone.  We think that’s the wrong approach.  Majority support does not make one view correct compared to another, though it may serve as a tentative clue.  Finding the truth involves identifying the best explanation.  Our source list offers a short-list smorgasbord of possibilities.

We won’t fool ourselves:  We don’t know the correct answer.  But that doesn’t mean we can’t assess the DNC’s rhetoric.

As noted above, the DNC’s claim could pass for true if taken literally.  But we can’t take it literally because using that interpretation damns the president with faith praise.  It’s not much of an accomplishment that one’s policies do not make life impossible for small business.

The DNC tells only part of the story, resulting in a fallacy of one-sidedness.  It’s not clear whether Obama’s tax policy has resulted in a more favorable small business climate, especially taking into consideration other things such as the burden of increased federal regulation.

Romer, Christina D. “Back to a Better Normal: Unemployment and Growth in the Wake of the Great Recession.” Elsa.berkeley.edu. University of California at Berkeley, 17 Apr. 2010. Web. 07 Jan. 2014.