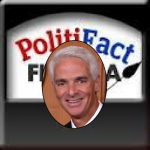 “(Charlie) Crist said Scott’s per-pupil education spending is “about $200 less” than the Crist administration did during the recession.

We rate the statement Mostly True.”

On July 18, 2014, PolitiFact Florida fact checked an education spending claim from Democratic gubernatorial candidate Charlie Crist.  PolitiFact Florida said Crist made the claim during an interview with the Tampa Bay Times’ editorial board:

“I can only imagine how nice it would be to serve as governor when you have a surplus of almost $3 billion. That’s what this guy has right now,” Crist said. “And in spite of it, he still hasn’t matched what I did during the recession for per-pupil funding for kids. In fact, he’s about $200 less.”

PolitiFact Florida puzzled us with this fact check.  A number of questions occurred to us while reading it.

Why did PolitiFact give Crist a pass for his apparent attempt to compare nominal-dollar figures, with no inflation adjustment, using a cherry-picked year preceding the recession?  Why didn’t PolitiFact narrow its examination to the lone true recession year during Crist’s term, 2008-2009?  Why did PolitiFact do its comparisons for per-pupil spending including federal and local government contributions?

PolitiFact Florida tried to check Crist’s claim that his recession-era per-pupil education spending was about $200 greater than Scott’s peak.  The only figure PolitiFact found that approximated the $200 difference came by using Crist’s 2007-2008 budget, which preceded the recession.  The recession officially started in December 2007.  Florida’s fiscal year runs from July 1 to June 30 of the following year, so the 2007-08 budget, fiscal year 2008, was nearly six months underway before the recession started.

Are we supposed to believe Crist foresaw the recession and budgeted accordingly?  That doesn’t seem reasonable to us.  If Crist was comparing his 2007-08 budget to Scott’s budgets then he’s cherry-picking his peak spending and passing it off as what he spent during the recession.

Crist gets a “Mostly True” rating from PolitiFact Florida for a failed comparison using nominal dollars.

PolitiFact Florida to the Rescue

With Crist’s claim of a $200 spending advantage in trouble, PolitiFact threw out Crist’s nominal-dollar comparison and replaced it with inflation-adjusted dollars (bold emphasis added):

Even at the lowest spending during Crist’s tenure in 2009-10, the inflation-adjusted total in state and local funding would be around $7,209, still a higher value than Scott’s last budget.

This reasoning implies Crist underestimated how much more he spent than Scott.  PolitiFact Florida appears to justify the truth of Crist’s claim by focusing on his underlying point, that he spent more per-pupil than Scott. 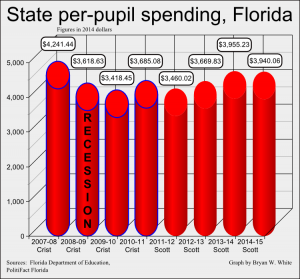 Looking only at inflation-adjusted state education spending changes the picture.  We calculated state spending as a percentage of total education spending, then used those percentages to figure the amount of state spending per pupil.  The graph to the left tells the story.  State spending during Crist’s recession year fell short of per-pupil spending under Scott for each year except for Scott’s first year in office.  Scott exceeded Crist’s level of funding from the recession year by $51.20 in his second year, $336.60 in his third year and $321.43 in  his fourth-year budget.  Crist’s average per-pupil spending was less than Scott’s average over four years, excluding local and federal funding.

Is It Right to Include Local and Federal Spending?

We expect some may object to our exclusion of federal and local funding for state K-12 education. We think our explanation above serves as an adequate justification, but we can claim added support through an article PolitiFact Florida cited from the Miami Herald and written by the Tallahassee bureau chief of the Tampa Bay Times, Steve Bousquet.  Bousquet’s June 2, 2014 story on Scott’s new budget downplayed Scott’s per-pupil education spending increase by pointing out that much of it came from local sources (bold emphasis added):

The bottom-line number for K-12 schools of $20.7 billion is the largest in history, but per-pupil spending is still $177 less than during the high-water mark of 2007-2008, the first year of former Gov. Crist, Scott’s likely opponent this fall.

In addition, about two-thirds of the increase in K-12 spending is paid for by local property taxes, due to increases in home values — one of several indicators of a rejuvenated Florida economy.

PolitiFact Florida prematurely stopped its digging into this story.  Excluding local and federal contributions to the Florida education budget, Rick Scott exceeded per-pupil spending under Crist during the 2008-2009 recession year for the past three years.

“Scott’s per-pupil education spending is “about $200 less” than the Crist administration did during the recession.”

PolitiFact Florida left out some important parts of the story, and we find the fact check contains a fallacy of one-sidedness.