Fact checking the White House infographic about Plan B 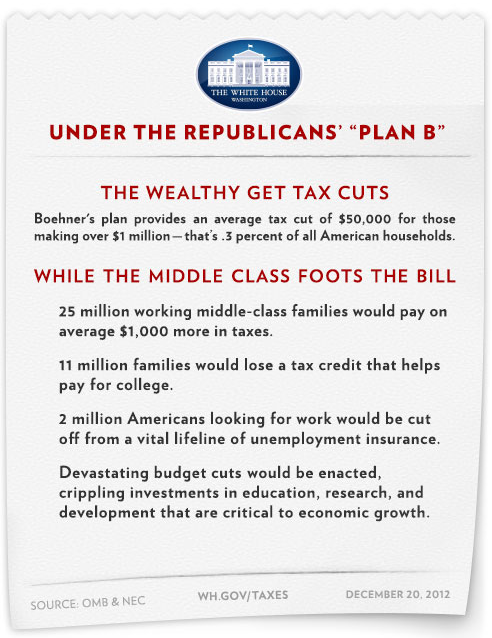 On Dec. 26, Zebra Fact Check published an evaluation of claims by House Democratic Leader Nancy Pelosi about the Republicans’ “Plan B” for resolving fiscal cliff negotiations. In that article, we noted that the White House put forth a statement similar to Pelosi’s on the official White House blog, and did it with “Get the facts” in the headline.

The White House repeats the message that under the Republicans’ “Plan B” the wealthy get tax cuts while the middle class foots the bill.

Pelosi mentioned “working families” rather than “the middle class.”

As with the statement from Pelosi, the White House relies in part on information from the National Economic Council.  In July 2012 the National Economic Council released a report assessing the effects of allowing various tax cuts to lapse, including the Bush tax cuts and some passed with President Obama’s stimulus bill, the American Reinvestment and Recovery Act.  The claims about 25 million working class families paying an average $1,000 more in taxes and 11 million families losing a college tax credit come from that NEC report.

The last two points on the infographic concern the loss of unemployment insurance as well as budget cuts.  The “Plan B” tax bill does not address either issue.

Relative to a “current law” baseline or relative to President Obama’s tax proposal, the Republican “Plan B” provides a tax cut for the wealthy.  Relative to current policy, the plan increases taxes on the wealthy.  “Table 1” from the White House document explicitly reveals that the $50,000 tax cut is measured against the president’s tax proposal.

Why does the White House infographic fail to describe the baseline that permits the description of a $50,000 tax cut?  Lack of room is one explanation.  An infographic can easily lose the strength of its message when overly cluttered.  On the other hand, White House representatives gave the same misleading presentation when speaking or writing about the “Plan B” proposal.  The consistency of the message suggests that the White House intentionally dropped important elements of the context when putting out its message on “Plan B.”  The resulting fallacy of ambiguity would strongly tend to mislead the audience.

“The middle class foots the bill”

The infographic trades on the same fallacy of ambiguity from the earlier claim to create the impression that the middle class foots the bill for tax cuts on high earners, augmenting the impression with two factoids taken out of context (see below).

As shown in our recent fact check on Nancy Pelosi, all income groups receive an average tax cut relative to current law.  Relative to current policy, on the other hand, the wealthy pay higher taxes and the lower income groups lose some benefits from tax credits, especially refundable tax credits.  The claim that working class families pay on average $1,000 more in taxes drops the context, producing an implicit apples-to-oranges comparison to the $50,000 tax cut the White House says the wealthy receive.  The White House could justify showing negative tax cuts on the middle class on its “Table 1” if the comparison was legitimate.

The ARRA replaced the Hope college credit with the more generous and partially refundable American Opportunity Tax Credit.  “Plan B” restores the Hope credit.  Yes, about 11 million families will lose the AOTC.  Many of those will remain eligible for less generous tax credits that help pay for college.  The White House statement is technically accurate and encourages a fallacy of ambiguity, leading the audience to believe that the 11 million families go from getting a tax credit for college to receiving no tax credit for college.  We think the natural interpretation is the misleading one, so we note that the statement is true given a moderately charitable interpretation.

“Devastating budget cuts would be enacted, crippling investments in education, research, and development that are critical to economic growth”

The last two claims on the infographic have no basis in the “Plan B” bill.  The White House apparently assumes that passage of “Plan B” precludes the additional passage of a bill extending unemployment benefits.  We’ll pass on evaluating the specifics of the two claims to help narrow the focus of the fact check, but we’ll at least note that the ambiguous wording will tend to lead an audience to conclude that the “Plan B” bill specifies those measures when it does not.

The middle class foots the bill

The explanatory infographic leaves a great deal unexplained and lends itself to misleading its audience about a number of details of the “Plan B” tax bill.

““Plan B” Cuts Taxes for Millionaires and Raises Taxes on the Middle Class – While Doing Little for the Deficit and Nothing to Stop Much of the Damage from the Fiscal Cliff.” WhiteHouse.gov. The White House, 19 Dec. 2012. Web. 31 Dec. 2012.