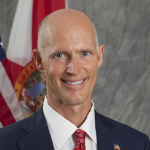 In June 2014, FactCheck.org and PolitiFact Florida fact checked the same ad from the Florida Democratic Party.  The ad attacked incumbent Florida Governor Rick Scott (R-Fla.).  A comparison of the fact checks helps explain why we view FactCheck.org as the current king of the fact-checking hill, with PolitiFact occupying the other end of the spectrum.

FactCheck.org gets to the root of the question immediately:

FactCheck.org goes on to note that Scott was involved in more than one lawsuit, and took the Fifth Amendment during a civil lawsuit not connected to the Medicare fraud suit.  FactCheck.org noted Scott refused to answer only one question directly related to the fraud issue.

PolitiFact Florida saved its conclusion until the end:

We have two quibbles with the ad: the Democrats don’t specify that the deposition was from a civil business case — not the federal government’s criminal fraud investigation into Columbia/HCA. However, Scott used the Fifth Amendment due to that federal investigation.

Also, the ad refers to multiple lawsuits — Scott was deposed in separate lawsuits, but he took the Fifth Amendment 75 times in only one of them.

We rate this claim Mostly True.

Though PolitiFact’s rating is silly given the misleading nature of the ad, we give PolitiFact Florida extra credit for noting that Scott refused to answer each question posed to him during the civil deposition.  He even refused to answer whether he was employed.

FactCheck.org clearly identifies the fundamentally misleading nature of the ad.  In contrast, PolitiFact mentions its two “quibbles” with the ad and rates it “Mostly True.”