A Kessler Glennocchio on the 97 percent consensus 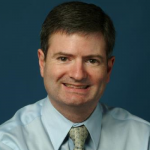 We ran across a fact check from May of 2013 recently while looking at search hits on the 97 percent consensus claim.  The Washington Post Fact Checker, Glenn Kessler, gave four “Pinocchios” to a Republican who denied a scientific consensus on the role of humans in driving climate change.

Kessler’s fact check topped the list of search engine hits.  That helps spur our critique of a year-old fact check, for Kessler blew it.

This won’t take long.  First, we need to pay careful attention to the claim Kessler checked from Rep. Chris Stewart (R-Utah).  We’re using the quotation as Kessler presented it:

“There is also uncertainty regarding to what degree man is to blame for global warming. However, the claim that 98 percent of scientists agree that humans are the singular driver of climate change has been repeatedly discounted. This oft-cited statistic is based on an online survey with a sample size of only 77 people, and the survey didn’t even ask to what degree humans contribute to climate change.”

— Rep. Chris Stewart (R-Utah), chairman of the House Subcommittee on Environment, in an opinion article, April 13, 2013

It’s crucial to note Stewart’s talking about an alleged consensus that people serve as the “singular driver of climate change.”  Somehow that fact completely eludes Kessler.

Kessler’s fact check rightly notes that surveys have produced a number of supports for a claim of a 97 percent consensus on climate change.  As we showed in our article from last year, “Making sense of the claims about climate change consensus,” those claims vary considerably in terms of the survey group and in terms of the type of consensus.  Not one supports a 97 percent scientific consensus that humans serve as the singular driver of climate change.  Stewart has a point if he’s saying there’s doubt about the role of humans hidden in the claims of a broad scientific consensus.

Stewart is trying to stack the deck here. He focuses on one small aspect of the survey — the result of a relatively small sample of climate scientists — while ignoring the broader result that found a substantial majority of scientists believed that humans have made a significant contribution to climate change. Moreover, he ignores the many other surveys that have found results very similar to the survey he referenced, whatever its possible flaws.

It’s fair for Kessler to point out that other studies support a consensus in the neighborhood of 97 percent.  But a fact checker should note in rendering judgment that none of the studies substantially pin down the extent of the human contribution to global warming.  It’s important to identify the object of consensus with precision befitting the claim.

Up through and including the Cook study from last year we have no surveys properly supporting a claim that 97 percent of scientists believe humans serve as the dominant cause of climate change.

We’re reproducing in a slightly different format our presentation on the sources for the 97 percent consensus claim.  Click an image to browse the images at full size. 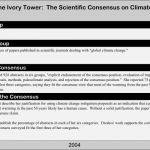 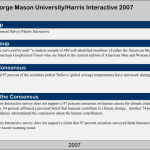 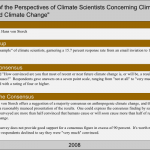 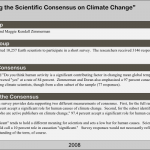 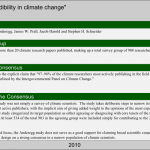 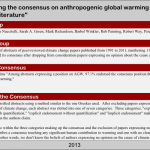 May 25, 2014:  Updated Anderegg summary to fix a grammatical error.