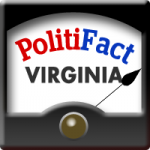 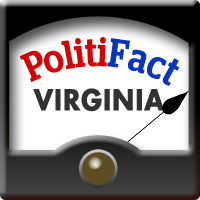 “Virginia Democrats believe they have found evidence showing states that expand their Medicaid rolls are better off than those that reject expansion.

“Barker said hospitals in states with Medicaid expansion have already benefited from a 30 percent drop in uncompensated care.

“The statement is True.”

PolitiFact Virginia performs an incomplete and misleading fact check on uncompensated medical care and the effects of the ACA’s Medicaid expansion.

On July 26, 2014  George Barker, a Democratic state senator in Virginia, argued at a political rally that the Affordable Care Act had helped reduce uncompensated care by 30 percent in states that expanded their Medicaid programs under the health care reform law.

A United States Supreme Court decision in 2012 made Medicaid expansion under the ACA optional. About half the states expanded Medicaid, receiving federal funds to help with the increased costs. Other states did not.

“Those states who have adopted Medicaid expansion, and half of the states have — what they have seen just in the first few months of this calendar year, 2014 – is a reduction in uncompensated care,” he said. “That means people who show up at the hospital, show up at the emergency department, are uninsured and can’t pay anything – charity care that’s provided by the hospital – that’s gone down by 30 percent just in the first few months.”

This seems to be an important point for their case, so we wondered about the origin of the figure.

PolitiFact Virginia says the 30 percent figure is correct and gives Barker a “True” rating for his claim.

We take issue with PolitiFact Virginia’s paraphrasing of Barker, its incomplete research and its implicit-yet-unfounded endorsement of Barker’s underlying argument. 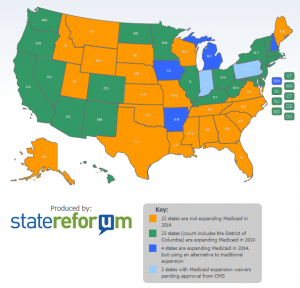 PolitiFact Virginia quotes Barker saying half the states had expanded Medicaid. PolitiFact mentions the Colorado Hospital Association surveyed only 15 of those states in the main study Barker used for support.

PolitiFact Virginia supplemented the evidence from the CHA with reporting from Tenet hospitals and the Arizona Hospital and Healthcare Association, concluding the reduction in uncompensated care looks like a trend.

The fact checker makes no objection to Barker extrapolating the results of these limited studies to apply to all states that expanded Medicaid.

PolitiFact Virginia does something worse than simply draw conclusion about facts on incomplete evidence, however. The fact checkers downplay the part of the story that brings into question Barker’s underlying argument.

The ACA cuts DSH payments under the expectation that a lower number of uninsured Americans will lead to a decrease in uncompensated care.  Barker and PolitiFact Virginia play up the drop in uncompensated care.  But if the increase in Medicaid payments doesn’t make up for the loss in DSH payments then who wins?  Hospitals may end up worse off with this benefit of the ACA.  PolitiFact Virginia recognized this, but did not allow it to lower Barker’s “True” rating (bold emphasis added):

The Governing article said the trend was positive, but hospitals are hoping it’s enough to offset cuts called for in the Affordable Care Act. The biggest piece of this will be $39 billion in cuts to the Disproportionate Share Hospital program, which helps hospitals that serve the poor.

Medicaid and Medicare reimburse hospitals at a rate less than the cost of care. The American Hospital Association explains:

Payment rates for Medicare and Medicaid, with the exception of managed care plans, are set by law rather than through a negotiation process as with private insurers. These payment rates are currently set below the costs of providing care resulting in underpayment.

Hospitals classify these losses separately from uncompensated care. The AHA reported Medicaid reimbursed 89 cents for each dollar of cost for health care services in 2012. If that shortfall remains constant, then an increase in Medicaid patients means a greater financial loss for treating Medicaid patients. 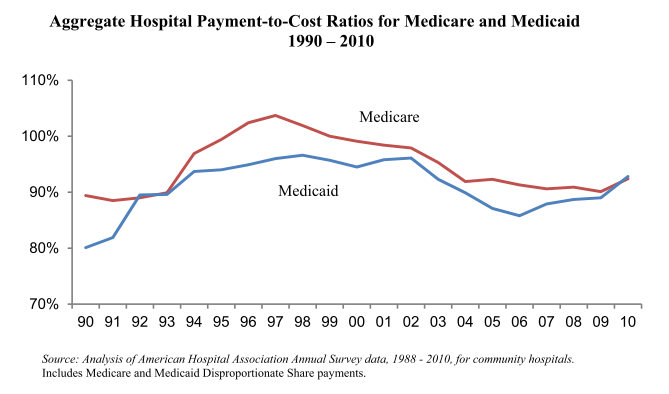 Politicians do not use statistics in speeches for no reason. Barker mentioned the drop in uncompensated care to highlight the success of the ACA.  PolitiFact acknowledges this with the first sentence of its fact check—expanding Medicaid makes states “better off”—but only revisits the argument by implying that the accuracy of Barker’s statistic bears out his underlying argument.

In fact, PolitiFact Virginia found information undercutting Barker’s argument. The CHA report, as PolitiFact Virginia noted, said hospitals did not know whether the savings from giving less uncompensated care would make up for the ACA’s other cuts, including cuts to DSH payments.

How does it follow that states expanding Medicaid are better off if the hospitals in those states experience no net gain?

We were able to think of a couple of ways, but PolitiFact Virginia considered neither in its fact check.

Federal funds that pay for state Medicaid programs are raised through federal general revenue collection—taxes paid by residents in all states—whether or not they participate in the program. Therefore, taxpayers in states not participating in the Medicaid expansion will bear a share of the overall cost, without benefitting from the program.

Our study found that the cost to states for expanding Medicaid generally would be lower than the expense state and local governments will face for providing uncompensated care to uninsured residents after implementation of the Affordable Care Act. 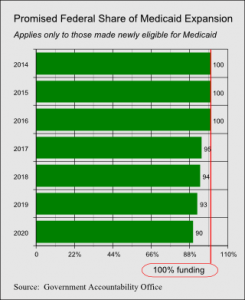 We think the coercive nature of this relationship makes it controversial whether the states receive a benefit, on balance, by expanding Medicaid. Projected costs are lower for the state governments, but may prove higher for hospitals and the federal government.

Barker argues that states are better off if hospitals spend about 30 percent less on uncompensated care. If everything else stayed the same, Barker would be right. But the federal government will probably pay more to provide health care for poor people. Hospitals may spend more; studies don’t yet make clear what will happen to the average hospital. State governments may spend less, not counting federal subsidies. But the federal subsidy money ultimately comes from people living in the states.

Given the uncertainties and omitted context, Barker doesn’t have much of an argument. The reduction in uncompensated care provided by hospitals, even if it exceeds 30 percent, gives an unreliable measure of the benefits of the ACA’s Medicaid expansion.

1) PolitiFact Virginia excused, without explanation, a number of inaccuracies in Barker’s statement.

3) In the end, PolitiFact Virginia rated Barker on an isolated factoid while ignoring weaknesses it exposed in his underlying argument.

“evidence showing states that expand their Medicaid rolls are better off than those that reject expansion.”

PolitiFact Virginia frames its fact check as though it is testing Barker’s evidence that state expansions of Medicaid create a benefit for those states. Whether Medicaid expansion makes states better off qualifies as an opinion.  More people get insurance through Medicaid, and other people bear the costs. The new arrangement under the ACA represents a complicated set of tradeoffs. We won’t place a truth rating on this matter of opinion. But we note that PolitiFact Virginia’s framing implies cuts to uncompensated care mean states are without question better off with the Medicaid expansion.

“hospitals in states with Medicaid expansion have already benefited from a 30 percent drop in uncompensated care.”

We find the statement true after stretching to allow a charitable interpretation. The CHA report provides adequate evidence that hospitals in some states saw a 30 percent decrease in uncompensated care.  The experience for hospitals in other states may differ. Neither Barker nor PolitiFact Virginia provided information clarifying this point for their audiences. Barker and PolitiFact Virginia presented the savings as a clear benefit even though the CHA report made clear it was uncertain whether the savings from uncompensated care would outweigh the ACA’s cuts to reimbursement. For that omission we charge Barker and PolitiFact Virginia with a fallacy of one-sidedness.

“The statement is True.”

Barker’s statement was true to the extent we note above, after providing a generously charitable interpretation.  However, PolitiFact and its affiliates do not use “true” the same way we do.  PolitiFact defines “True” to mean “The statement is accurate and there’s nothing significant missing.” Taken literally, PolitiFact’s definition compels us to rate its claim false. Significant information was left out of the supposedly “True” claim.

The statement is technically true if interpreted charitably, but not “True” as PolitiFact defines it.