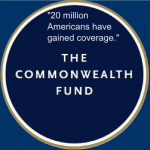 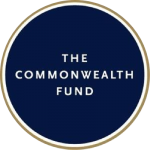 “Taking into account all the health insurance expansions initiated by the Affordable Care Act (ACA), an estimated 20 million Americans have gained coverage as of May 1, 2014.”

One version of the progress report was published online by the New England Journal of Medicine.  That was the first version we encountered, after the Washington Post Fact Checker announced the report estimated 20 million gained coverage through the ACA.  The Fact Checker, Glenn Kessler, said the report failed to explain a key figure:

An article in the New England Journal of Medicine pegged the number at 20 million. The authors credited just one million for young adults, but included the five million for off-exchange plans. However, the authors do not explain why they count this as a gain when the CBO says the ACA will lead to a reduction in off-market plans.

The Commonwealth Fund Website hosts a slightly different version of the report.  It makes the same claim of 20 million gaining insurance through the ACA:

Taking into account all the health insurance expansions initiated by the Affordable Care Act (ACA), an estimated 20 million Americans have gained coverage as of May 1, 2014. These include young adults who gained coverage under parents’ policies, people who bought plans in the marketplaces, individuals who purchased coverage directly from insurers, and adults and children who enrolled in Medicaid or the Children’s Health Insurance Program.

How many have gained insurance coverage through the ACA?

Like Kessler, we were curious about how 5 million people bypassing the government exchanges to sign up for nongroup insurance would count as people gaining insurance.  We started by looking for evidence in support of that claim, and found a line sourcing the statistic to the Congressional Budget Office:

The footnote directed us to the CBO report “Updated Estimates of the Effects of the Insurance Coverage Provisions of the Affordable Care Act, April 2014.”  And we did find a line in the report estimating that 5 million per year would sign up for nongroup private insurance outside the government exchange system.  But it also made clear that 5 million figure was down from 9 to 10 million without the ACA:

CBO and JCT estimate that relatively few people will be enrolled in noncompliant nongroup plans. The agencies project that, under the ACA, in 2014 about 2 million people will purchase noncompliant plans; they anticipate that enrollment in such plans will decline to negligible numbers by 2016. They also project that enrollment in nongroup plans through the exchanges will average 6 million people in 2014, 13 million in 2015, and 24 million or 25 million each year thereafter, and that roughly 5 million people will enroll in ACA-compliant plans outside of the exchanges each year from 2014 through 2024. That last estimate is especially uncertain because information on the number of people who have purchased coverage in the nongroup market in past years is incomplete and varies widely by data source.

In the absence of the ACA, 9 million to 10 million people would have enrolled in nongroup coverage each year from 2014 through 2024, CBO and JCT estimate.

So the ACA would cut the number of non-exchange insurance purchases by 4-5 million and The Commonwealth Fund counts this as a gain.  We surmised the authors of the report had used an impossibly unlikely interpretation of the CBO report and emailed them based on that understanding.  And then we started going over more of the Commonwealth Fund report (bold emphasis added):

Taking all existing coverage expansions together, we estimate that 20 million Americans have gained coverage as of May 1 under the ACA (Fig. 3). We do not know yet exactly how many of these people were previously uninsured, but it seems certain that many were. Recent national surveys seem to confirm this presumption. The CBO projects that the law will decrease the number of uninsured people by 12 million this year and by 26 million by 2017.

This was our first clue that “gained coverage” doesn’t mean a net gain in health insurance coverage.  The authors admit the CBO predicts the number of uninsured persons will drop by about 12 million in 2014.   What does “gained coverage” mean, then?

Unfortunately, the authors of the report don’t offer a clear definition.

Taking a Stab at Charity

Our best attempt at granting charitable interpretation assumes that “gaining coverage” means getting an ACA-compliant health insurance plan.  A single adult male who moves from a non-compliant plan to an ACA-compliant plan gains maternity coverage and lower limits on out-of-pocket spending.  Under this interpretation, the report’s authors count ACA compliance as a benefit even if the new coverage is worse than their former coverage.  If that interpretation is right, then it is natural to object that the authors make no attempt at all to quantify lost coverage.  The ACA creates both winners and losers.  The Commonwealth Fund counts only winners in this report, and many of the winners it counts probably lost.

We’re not especially comfortable with our attempt to offer charity to the report’s authors.  Figure 3 in the report throws a spanner in the works. 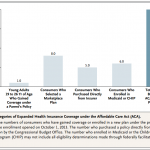 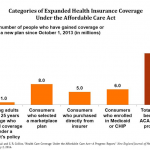 For both versions of the graph, the 5 million signups from insurance purchased beyond the exchange system make up a quarter of the 20 million total.  For both versions of the graph, the 20 million total is described as the “Total covered because of ACA coverage provisions.”  The wording strongly suggests a net gain in coverage because of the ACA.  We would expect that figure to match the decrease in the number of uninsured Americans.  Yet we have no particular reason to think many of that 5 million came from the ranks of the uninsured.

Why does the Commonwealth Fund’s report use those words if they are not intended to reflect a 20 million person bite out of the ranks of the uninsured?  On the same topic, why do “Consumers who purchased directly from insurer” count among “Categories of expanded health insurance coverage” when that number dropped by close to 5 million?

We suggest sincere researchers communicate their findings or predictions clearly.  Counting decreases in the number of uninsured Americans serves as a clear criterion for judging the success of the ACA.  An ill-defined “gained coverage” does not serve that purpose well, though it may serve very well to mislead people into overestimating the ACA’s success in lowering the number of uninsured Americans.  It is incumbent on the ones promoting the number who “gained coverage” to define it into usefulness.

We think it pointless to try to second-guess the number who “gained coverage” when it isn’t clear what the term means.  It doesn’t matter what that number is if people do not clearly understand what it means.

As for the number of uninsured Americans gaining insurance, that’s a bit easier.  The 22 million figure from Sebelius is like the Commonwealth Fund’s number, going beyond apples and oranges into fruit basket territory.  The 20 million figure from the Commonwealth Fund suffers the same problem minus 2 million.  The Congressional Budget Office number, 12 million, may end up pretty close.

Here’s a breakdown of the numbers based on Kessler’s estimates and our work on the number of exchange signups not previously insured:

It’s reasonable to estimate 11-15 million will leave the ranks of the uninsured.  The higher number includes dubiously high estimates of children receiving coverage under their parents’ policies, as well as about 2 million who were eligible for Medicaid without the ACA but didn’t sign up until the ACA’s well-publicized enrollment period came around.

The Commonwealth Fund muddies the water with its 20 million figure for people who “gained coverage” thanks to the ACA.  Like the administration’s 22 million number, it is poorly defined and misleading.  For those who understand it to represent a lowering of the number of uninsured Americans, it exaggerates the effects of the ACA by about 60 percent.  The Commonwealth Fund report uses language strongly encouraging that incorrect view, even though the text of the report includes the contrasting 12 million number from the CBO.

We don’t know whether the Commonwealth Fund’s number is correct or even close for those who “gained coverage” through the ACA since the authors of the report offer no definition that would enable some type of verification of their claim.  Until then, the Commonwealth Fund’s 20 million figure serves mostly to mislead people about the effects of the ACA.

Correction 7/10/2014:  Kathleen Sebelius was HHS secretary, not HRS secretary as stated in the original published version.