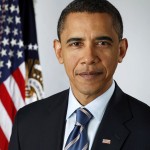 “I know that this has been some of the conventional wisdom that’s been floating around Washington that somehow, even though most people agree that I’m being reasonable, that most people agree I’m presenting a fair deal, the fact that they don’t take it means that I should somehow do a Jedi mind-meld with these folks and convince them to do what’s right.”

President Obama uses conventional deceptive tactics rather than special Vulcan abilities or Jedi mind tricks to manipulate his audience regarding the public’s view of his sequestration dealings.

President Obama said on Nov. 09, 2012 that he would not accept a deal on the budget that wasn’t balanced (bold emphasis added):

Now, already, I’ve put forward a detailed plan that allows us to make these investments while reducing our deficit by $4 trillion over the next decade.  I want to be clear — I’m not wedded to every detail of my plan.  I’m open to compromise.  I’m open to new ideas.  I’m committed to solving our fiscal challenges.  But I refuse to accept any approach that isn’t balanced.  I am not going to ask students and seniors and middle-class families to pay down the entire deficit while people like me, making over $250,000, aren’t asked to pay a dime more in taxes.  I’m not going to do that.

(W)hen it comes to how we reduce our deficit, I argued for a balanced, responsible approach, and part of that included making sure that the wealthiest Americans pay a little bit more.

I think every voter out there understood that that was an important debate, and the majority of voters agreed with me. By the way, more voters agreed with me on this issue than voted for me. So we’ve got a clear majority of the American people who recognize if we’re going to be serious about deficit reduction, we’ve got to do it in a balanced way.

We fact checked the claim of majority support and considered it flawed.

With a Jan. 1, 2013 sequestration deadline on the doorstep, Democrats and Republicans agreed on a tax reform measure, the American Tax Relief Act of 2012.  The Act made permanent the Bush tax cuts for about 98 percent of Americans and preserved some of the tax cuts remaining from the 2009 stimulus bill, the American Recovery and Reinvestment Act.  The ATRA allowed the Bush tax cuts to lapse for about the top 2 percent of earners.  It also allowed the payroll tax cut from the ARRA to lapse.  As a result,  the majority of Americans will pay higher taxes this year than last.  Finally, the ATRA delayed the sequestration budget cuts until March 2, providing more time to negotiate a replacement for sequestration.

News outlets such as CNN described the year-end “fiscal cliff” deal as one stage of negotiations on the deficit:

Obama acknowledged what had become obvious: the broader deficit reduction deal he seeks will likely come in stages, rather than in the so-called grand bargain he and Boehner have been negotiating.

With the ATRA, then, Mr. Obama had arguably fulfilled his pledge to make higher income earners pay more.

The president’s rhetoric on sequestration negotiations has changed little, however.  Mr. Obama, March 1:

The president renewed his pledge to hinge budget negotiations on obtaining more tax revenue from high income earners.  The Republicans, after compromising on higher taxes, refused to compromise on higher taxes a second time.

On Feb. 21, Pew Research published survey data collected in February 2013.  The question about cutting the deficit was worded with enough care to clue respondents that it had to do with negotiations taking place after the ATRA (bold emphasis added):

Q.11  In your view, as Congress and the president discuss steps to reduce the budget deficit over the coming months, should they focus [RANDOMIZE: ONLY on spending cuts, ONLY on tax increases] or should they do a combination of both?

Q.12     If both spending cuts and tax increases are being considered should the focus be [READ AND RANDOMIZE]?

Mr. Obama also finds plurality public support for his approach to deficit reduction in the Pew poll, besting congressional Republicans on the issue 45 percent to 38 percent.

The Pew poll does feature one prominent problem:  A large number of the respondents weren’t familiar with the impending sequestration.  The confessed lack of knowledge was so significant that Pew Research led off its publication announcement with it (bold emphasis added):

After a series of fiscal crises over the past few years, the public is not expressing a particular sense of urgency over the pending March 1 sequester deadline. With little more than a week to go, barely a quarter have heard a lot about the scheduled cuts, while about as many have heard nothing at all.

The fact checkers at PolitiFact also looked into a recent statement from the president claiming public support for his “balanced approach” to deficit reduction.  PolitiFact considered a number of polls in making its ruling.

15.  In January, the president and Congress reached a budget agreement that raised tax rates on wealthy Americans and postponed making cuts to government spending. This time, would you prefer the budget deal reduces the deficit by focusing:

The poll provided readers with five potential answers.  The most popular choice was “On an equal mix of spending cuts and tax increases” with 36 percent.  Second place went to “Only on cutting government spending” with 33 percent.

The Bloomberg News poll fails to account for the ATRA bill with its question on addressing the federal deficit:

Since the ATRA provides for increased revenue through higher taxes, the question will not address respondents’ approval of the president asking for two separate compromises on tax increases.

PolitiFact saw a February poll by NBC-WSJ as neutral regarding public support for Mr. Obama’s position on debt reduction.  PolitiFact gave no attention to the question asking which party respondents trusted most to cut the deficit.  Republicans held a 6-point advantage, 31 percent to 25 percent.

1* Should the long-term federal budget deficit be reduced by cutting spending, by raising taxes, or combination of tax hikes and spending cuts?

I do believe that we can and must replace these cuts with a more balanced approach that asks something from everybody:  Smart spending cuts; entitlement reform; tax reform that makes the tax code more fair for families and businesses without raising tax rates —  all so that we can responsibly lower the deficit without laying off workers, or forcing parents to scramble for childcare, or slashing financial aid for college students.

I don’t think that’s too much to ask.  I don’t think that is partisan.  It’s the kind of approach that I’ve proposed for two years.  It’s what I ran on last year.  And the majority of the American people agree with me in this approach, including, by the way, a majority of Republicans.

This description comes from the same speech that contains his “Jedi mind-meld” reference.

The president’s “something from everybody” approach is more clearly expressed by economist Robert Kahn, writing for the Council on Foreign Relations, who said:  “The president has called for a 1:1 ratio of spending cuts to revenue.”

The White House took that stance again in endorsing a Senate plan that also called for a 1:1 ratio between spending cuts and new revenues:

Today, Senate Democrats offered a balanced plan to avoid across the board budget cuts that will hurt kids, seniors, and our men and women in uniform. The plan includes spending cuts that won’t harm middle class families while closing tax loopholes that benefit the wealthiest.

That broad definition of his specific policy is the real-life version of the Jedi mind trick:  a fallacy of ambiguity.  By giving his plan the broad description “balanced,” the president lays illegitimate claim to support from Americans who favor of shrinking the deficit predominantly through spending cuts.  Despite what the fact checkers at PolitiFact might think, the president’s plan isn’t as simple as favoring a mix of spending cuts and increased revenues.  Polls showing public support for such a mix do not translate directly into support for the president’s claim. 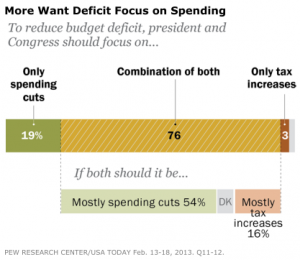 Do a majority side with President Obama on deficit reduction?

By now it is plain that Mr. Obama’s claim is a bit fuzzy.  What constitutes agreeing with him?  Favoring a 1:1 ratio between spending cuts and tax hikes?  What other groups should we put in Obama’s corner?  Those who favor fixing the deficit with tax hikes alone?  Those who favor dealing with the deficit mostly through spending cuts?  Do we need to somehow divvy up the 76 percent of respondents the Pew poll put in the “Combination of both” group?

We could suggest more than one reasonable method to decide the issue, but any method is largely arbitrary given an ambiguous claim like Mr. Obama’s.  We don’t think a factual determination is possible in this case without a clear claim and an appropriate set of data by which to measure it.  But we think it plain that the rhetoric from Mr. Obama and the White House employs the fallacy of ambiguity to enlarge the appearance of public support.

Speaking of public support, we have in the past forgiven the president his flirtations with the fallacious appeal to popularity.  But given that Obama showed little concern with the strong, often popular, opposition to his signature health care reform bill and hinted at a link between the popularity of the “balanced approach” and it being “what’s right,” we’ll charge him with that fallacy in this case.

“(E)ven though most people agree that I’m being reasonable … I should somehow do a Jedi mind-meld with these folks and convince them to do what’s right.”

The would-be popularity of the president’s position doesn’t make it right.

Though fallacious reasoning lacks the glamor of a Jedi mind trick, it can prove quite effective.  The political rhetoric surrounding this issue may itself help explain some of the poll numbers we’ve examined.

We might consider another dimension to the popularity of Mr. Obama’s position on deficit reduction:  Are the people aware that the plan he and the Democrats have put forth may do too little cutting to get the job done?

“President [Obama] has set the target for deficit reduction far too low,” commented the Committee for a Responsible Federal Budget after Obama laid out his target two weeks ago. “He failed to mention that the $4 trillion economists were calling for after the Simpson-Bowles report is now more like $6.7 trillion today. By that measure, our debt problems are far from solved.”

There’s a good reason we classify the appeal to popularity as a fallacy.

We used the wrong figure in our rhetorical question about dividing up poll respondents who favored a mix of spending cuts and tax increases to address the deficit:  “Do we need to somehow divvy up the 54 percent of respondents the Pew poll put in the “Combination of both” group?”  The  correct figure was 76 percent.