“The Violence Against Women Act — in the news this week following a U.S. Senate vote to reauthorize it — has been linked to reductions in domestic violence, according to several PolitiFact fact checks.”

Kertscher’s right that PolitiFact has linked the Violence Against Women Act to reductions in domestic violence.  Scant evidence supports PolitiFact’s string of claims.

Richard Rubin’s story for PolitiFact in 2008 used the title “Cause and Effect?  Possible, but not clear.”  His story cited a “University of Arkansas” study, “Explaining the Recent Decline in Domestic Violence,” by Amy Farmer and Jill Tiefenthaler.  The story gave a “Mostly True” rating to President Obama’s claim that violence fell “dramatically” after the VAWA passed.

Kertscher wrote the VAWA story PolitiFact Wisconsin published in December 2012, rating U.S. Rep. Gwen Moore (D-Ohio) “Mostly True” on her claim that domestic violence decreased 67 percent after the law’s enactment.  Kertscher’s story cited a study by Carnegie Mellon University rather than the “University of Arkansas study” Rubin cited.  It was the same study.  Kertscher also cited a separate study estimating the cost-benefit analysis of the VAWA.

On Feb. 7 PolitiFact Oregon, in a story written by Charles Pope, rated Sen. Jeff Merkley (D-Ore.) “True” on his claim that domestic violence fell more than 50 percent.  PolitiFact Oregon did not investigate whether the Act had a causal role in the decrease, yet noted that Merkley’s claim amounted to “a pretty strong selling point” for reauthorizing the law. 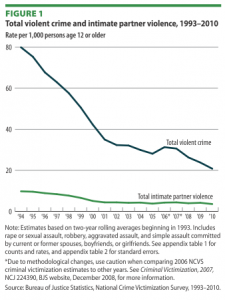 A Department of Justice report provides the basis for the claim of a decrease in domestic violence.  The first two stories from PolitiFact both cited the DOJ report.  A chart from the report shows how the incidence of domestic violence tracks with an overall decrease in violent crime.

It’s obvious from the DOJ chart that the same factors bringing down violent crime overall likely helped drive down intimate partner violence.  The two PolitiFact fact checks that mentioned the VAWA’s causal effects on domestic violence each cited the DOJ report.  Any support for the assertion of a causative effect thus comes from Farmer and Tiefenthaler along with “A Cost-Benefit Analysis of the Violence Against Women Act of 1994” by Clark, Biddle and Martin.

Rubin, PolitiFact and Obama in 2008

Rubin’s fact check for PolitiFact relied on Farmer and Tiefenthaler.

Rubin failed to disclose significant caveats from the study, which was conducted through the now-defunct Carnegie Mellon Census Research Data Center and funded by the National Consortium of Violence Research.  The first caveat:

(T)rend data are available on intimate partner homicide since the 1970s and these data support a long-term decline in domestic violence.

The long-term downward trend for domestic violence has obvious implications for political statements like the ones PolitiFact rated.  The same factors that contribute to a downward trend prior to the passage of the VAWA are likely to continue to reduce domestic violence after the Act went into effect.  Obviously it’s an irresponsible stretch to credit all of the decrease to the Act.

While we cannot say that the variables that are both significant determinants of the incidence of domestic violence at the individual-level and trending in the right direction nationally are definitively the causes of the trend downward in the rate of domestic violence, they are likely suspects.

Even setting the caveats aside, the paper provides support for the VAWA taking only fractional credit for the decrease in domestic violence.  Out of three factors, Farmer and Tiefenthaler gave the greatest credit for the decrease to the existence of programs giving legal help to abuse victims.  The bulk of growth in the number of those programs preceded passage of the VAWA:

According to the 1986 National Directory of Domestic Violence Programs, in 1986 there were 336 legal services programs serving victims of domestic violence.  By 1994, the number increased to 1190 programs nationwide, an increase of 254%!  Between 1994 and 2000, the number of legal programs for battered women increased to 1441 programs.

The 1994 edition of the National Directory of Domestic Violence Programs is unlikely to include many, if any, legal assistance programs that sprang from a bill passed in late 1994.  The growth rate for such programs in the shorter period from 1994 to 2000 was a comparatively pedestrian 22 percent. State and local governments, along with private organizations, probably deserve most of the credit.

Farmer and Tiefenthaler offer an estimate of the effects from the three causes they identified:

As previously discussed, the incidence of domestic violence declined by 21% between 1993 and 1998 from 1.1 million violent incidents to 876,340 incidents.  … the improvement in women’s educational and economic status, the increase in the number of legal programs, and the aging of the population – explain approximately 22% of the decline (almost  50,000 incidents) in domestic violence over this time period.

One can’t legitimately use Farmer and Tiefenthaler’s work to credit more than 22 percent of the decrease in domestic violence to the VAWA, and even that number represents extreme generosity.  Remember, the VAWA accounts for a minority of the legal assistance programs the study ranks first among the three “determinative” factors it identified.   The VAWA literally accounts for a fraction of a fraction of a fraction of the total decrease in domestic violence, based on the study.

Rubin acknowledges that one could argue that the decrease in domestic violence would have occurred regardless of the VAWA, yet writes:

There are, however, some solid reasons to think Biden’s law made a difference. A study by the University of Arkansas, for instance, concluded in 2000 that the law’s increased funding for civil legal assistance for victims contributed to the decline. Though that study also said economic and demographic factors mattered.

Obama never said the law caused all of the decrease, but he implied it, so we will rate this statement Mostly True.

Rubin says Obama implied that the VAWA caused the entire decrease.  The president gets the amount of the decrease right, so that amounts to “Mostly True” as PolitiFact sees it.

Kertscher followed Rubin in mentioning Farmer and Tiefenthaler in his story for PolitiFact Wisconsin, but in his version the study offered evidence of factors other than the VAWA for decreasing domestic violence:

A 2002 University of North Carolina study estimated that the law had saved billions of dollars in social costs by reducing incidents of domestic violence.

But it’s also clear that other factors bear on the decline.

Carnegie Mellon University researchers in 2003 concluded that three other factors were key in declines in domestic violence incidents between 1993 and 1998 — an increase in legal services for victims; improvement in women’s economic status; and the aging of the population.

The 2002 study, published in Violence Against Women, provides little evidence supporting the VAWA as a factor decreasing domestic violence.

What Kertscher writes about it is true.  The study estimates the VAWA has saved billions of dollars at a reasonable cost.  But the study, for no obvious reason, assumed the law would account for between 10 and 100 percent of the entire reduction in domestic violence (bold emphasis added):

(T)he rates of victimization are what drive the results of the cost-benefit analysis because the cost of response to a homicide, nonfatal rape, or nonfatal assault is identical with or without VAWA-I. As a result, sensitivity analysis considers the effect of varying the reduction in criminal victimization rates for women attributable to VAWA-I from 10% to 100% of the actual reduction observed.

We understand setting the ceiling at 100 percent of costs, but the 90 percentage point range gives us pause.  Nor do we see the justification for setting the floor at 10 percent.  We also wondered whether the study figured in the costs of incarceration associated with more aggressive arrests for domestic violence offenses.  The text offered no obvious clues.

The study offers almost nothing to confirm the amount of domestic violence reduction attributable to the VAWA.  The VAWA’s role in causing the decrease is apparently assumed and then estimated in very rough terms.

Armed with this evidence, Kertscher writes:

(Moore’s) statement is generally on the money, though a bit dated. It also needs some clarification — namely that there are factors in addition to the law that are linked to the decrease.

Kertscher found very close to zero evidence that the VAWA had any effect at all, overlooking as he did the positive contribution from Farmer and Tiefenthaler.  He and PolitiFact Wisconsin give Moore a “Mostly True” rating for a technically true claim and an underlying argument that commits a radical exaggeration of cause and effect.

Charles Pope and PolitiFact Oregon gave little attention to whether the VAWA caused the decrease in domestic violence.  Pope writes as though the VAWA’s role in causing the decrease is a given.  His evidence requires that presumption:

The statement from the National Network to End Domestic Violence does not, contrary to Pope’s claim, connect the numbers directly to the legislation–unless we count an implied fallacy of post hoc ergo propter hoc (after this, therefore because of this).  The NNEDV statement says the VAWA changed the response to a list of crimes, and it says domestic violence is dropping.  It stops short of explicitly claiming causation.

Surveys by the American Bar Association and other independent groups had similar findings.

Rather, Pope repeats his error of seeing an explicit claim of causation where none exists.  Pope provided no direct link, but a search of the American Bar Association website using the title he provided for the survey turned up the likely source of his claim.  The voluminous survey material does not mention the Violence Against Women Act at all.

That’s a lot of scholarship and paper, sponsored, collected and analyzed by federal and independent researchers. And while the results don’t perfectly align, all agree that the incidence of domestic abuse has dropped by more than 50 percent since the Violence Against Women Act was passed in 1994. You can quibble about the minor differences but not the accuracy of Merkley’s statement.

We rate this claim: True.

Pope found plenty of information supporting a drop in domestic crime and none supporting the VAWA as a cause of the decrease.  The Democratic Party senator who was the subject of the fact check could only deserve a “True” rating by ignoring his underlying message.  Yet PolitiFact Oregon openly acknowledged and accepted the underlying argument.

The truth about the effects of the VAWA

We don’t know how much responsibility to give the VAWA for the two-decade decrease in domestic violence.  But we can recommend a commonsense estimate.

We should reasonably credit the VAWA to some extent with both listed factors, though the states have probably taken a lead role in both.  The total effect is almost certainly more than zero percent and almost certainly less than the 22 percent figure from Farmer and Tiefenthaler, bearing in mind that their study did not consider the role of arrests, prosecutions and incarcerations.  Twenty-two percent of a 63 percent drop is about 14 percent.  PolitiFact is approving some pretty misleading rhetoric.

“Obama never said the law caused all of the decrease, but he implied it, so we will rate this statement Mostly True.”

Mitt Romney never said in his Jeep ad that Chrysler would move all production from American plants to Chinese plants, but PolitiFact said he implied it and rated him “Pants on Fire.”  The rating for Obama only follows if PolitiFact Wisconsin accepts an exaggerated role for the VAWA in decreasing domestic violence.  PolitiFact Wisconsin thus communicates to its readers that the VAWA has a large role in decreasing domestic violence.

“(Moore’s) statement is generally on the money, though a bit dated. It also needs some clarification — namely that there are factors in addition to the law that are linked to the decrease.”

“That’s a lot of scholarship and paper, sponsored, collected and analyzed by federal and independent researchers.”

In each case, PolitiFact largely excuses misleading political rhetoric.  PolitiFact misleads its audience by doing so.

Correction March 6, 2013:  We inadvertently ended the section on Rubin’s national PolitiFact story with “as PolitiFact Oregon sees it.”  We’ve now omitted the “Oregon” to make the words match our intent.