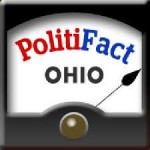 What about (Ohio state senator Maag’s broader point — that Medicaid expansion under Obamacare would result in more deficit spending?
… But the facts, projections and law, as they exist today, do not support his claim. We rate it False.
—PolitiFact Ohio

PolitiFact Ohio uses specious reasoning in its rating of a Republican lawmaker from Ohio.

PolitiFact Ohio checked two main issues with a statement from Ohio state senator Ron Maag.  Maag claimed the Medicaid expansion under the ACA would receive 46 percent of its financing from foreign buyers of U.S. debt such as China.  Separately, PolitiFact also rated Maag’s underlying point, that the Medicaid expansion would contribute to the federal budget deficit.

On the first question, PolitiFact found that the shrinking deficit in 2013 requires less outside funding and therefore less debt:  34 percent.

On the second question, PolitiFact reasoned that since the deficit is shrinking and the CBO says the ACA shrinks the deficit, therefore the Medicaid expansion does not contribute to the deficit:

What about Maag’s broader point — that Medicaid expansion under Obamacare would result in more deficit spending?

That is not what the CBO — the same nonpartisan office whose work Maag mentioned in defending part of this claim — projects.  The CBO has examined this several times, working with the bipartisan Joint Committee on Taxation.

PolitiFact Ohio concludes that the CBO’s projections for the whole of the ACA make false Maag’s conclusions about the Medicaid expansion under the ACA.  PolitiFact Ohio rates his statement “False.”

PolitiFact makes its biggest mistake by confusing the Medicaid expansion under the ACA with the ACA as a whole while trying to explain why the expansion doesn’t add to the deficit.

Maag’s statement stood out because it sounded contrary to federal assessments about the program’s financing.

The financing of the federal share of Medicaid comes from the general treasury.  There is no separate fund that pays for Medicaid.

Obamacare has costs, chiefly the cost of expanding health coverage with Medicaid and with subsidies for individuals and small employers who lack insurance, cannot afford it and cannot qualify for Medicaid. But it also has savings.

Any savings or taxes not directly associated with the Medicaid expansion do not count against Maag’s claim.  Taxes on medical devices or annual fees on insurance companies do not lower the cost of the Medicaid expansion.  They can lower the net cost of the ACA, but the CBO already accounted for net costs in noting the degree to which the U.S. has borrowed so far in 2013.

There’s one class of savings we might count as directly touching Medicaid costs.  By decreasing the number of uninsured patients, the ACA is expected to decrease the cost to the government of reimbursing hospital care given to uninsured patients.  PolitiFact, citing the testimony of the Ohio Hospital Association’s president and CEO, Mike Abrams, put the savings in Ohio at $7.4 billion over 10 years.

Though the savings of $7.4 billion sounds good at first, the overall cost of the Medicaid expansion puts that figure in perspective.  PolitiFact for some reason does not provide that figure to its readers.  We found an estimate of the costs by the Urban Institute, via the Kaiser Commission on Medicaid and the Uninsured (bold emphasis added):

If all states expand Medicaid under the ACA, total national Medicaid spending would increase by about $1.0 trillion over the 2013-2022 decade, with the federal government paying 93% of these costs.

In Ohio, the Kaiser Commission report estimates the ACA’s Medicaid expansion will increase costs to the federal government by $58 billion over 10 years.  Costs to the state will increase by an estimated $6.6 billion. 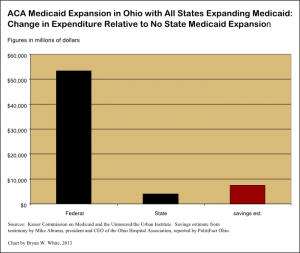 The same report also produces results for Ohio assuming no states implement the ACA’s Medicaid expansion, which we think provides the closest match to Maag’s claim.  The results are similar, with the federal government’s costs in Ohio rising by $53.3 billion and the state’s costs increasing by $4 billion.

CBO and JCT now estimate that the insurance coverage provisions of the ACA will have a net cost of $1,168 billion over the 2012–2022 period—compared with $1,252 billion projected in March 2012 for that 11-year period—for a net reduction of $84 billion.

The federal government spends less money if some states opt out of the Medicaid expansion.

“the facts, projections and law, as they exist today, do not support his claim [that Medicaid expansion under Obamacare would result in more deficit spending]”

Maag focused on one particular expense authorized by the ACA.  Importantly, that expense was made optional by the Supreme Court ruling on the ACA.  By considering the ACA’s revenues and cost-saving features unrelated to the Medicaid expansion, PolitiFact Ohio ends up addressing something other than Maag’s claim.  That is, PolitiFact Ohio commits a straw man fallacy.

Maag was correct that the Medicaid expansion costs the federal government money and requires more federal borrowing.  PolitiFact Ohio’s fact check did much to obscure that truth.

We’re not ruling on the accuracy of Maag’s whole statement.  We think it has problems PolitiFact Ohio didn’t plumb, such as the fact that much of U.S. debt is purchased domestically.  The part of the claim PolitiFact identified as Maag’s underlying argument is true, however.

Koff, Stephen. “Rep. Ron Maag Says 46 Percent of Medicaid Expansion Money Would Be Borrowed from Foreign Governments That Don’t “like Us Very Much”” PolitiFact Ohio. Tampa Bay Times, 22 May 2013. Web. 27 May 2013.