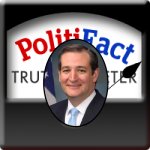 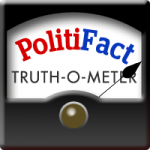 “[Sen. Ted] Cruz said Obamacare has led to premiums going up and up and up for virtually every person.”

PolitiFact provides a sterling example of settling on an improbable interpretation of a politician’s statement.

“President Obama promised the American people Obamacare would lower your health insurance premiums,” Cruz said. “I would venture to say virtually every person across this country has seen exactly the opposite happen, has seen premiums going up and up and up.”

We received many requests to check this statement and so we’ll examine whether Obamacare meant that “virtually every person across this country … has seen premiums going up and up and up.”

PolitiFact eventually graded Cruz’s statement “False” on its trademarked “Truth-O-Meter,” basing the rating squarely on the lack of proof that Obamacare was responsible for raising premiums on virtually all Americans (bold emphasis added):

Cruz said Obamacare has led to premiums going up and up and up for virtually every person. Cruz was most inaccurate when he spoke sweepingly about most Americans. The fact is, the majority of Americans already have insurance and Obamacare has had little impact on their premiums.

… We rate his claim False.

We question the central pillar of PolitiFact’s ruling, that Cruz blamed rising premiums on Obamacare.

Cruz noted that President Obama promised the health care reform law would lower premiums.  PolitiFact obviously agrees that Obama made that promise, for it ruled it a “Promise Broken” on its trademarked Obameter:

In assessing this promise, we consider the following: An author of the $2,500 figure has disavowed its use as it relates to premiums alone. An independent health care analyst projects that premiums will go up for the typical family. The federal agency implementing the Affordable Care Act did not provide evidence that premiums will go down for the typical family. We rate this a Promise Broken.

Cruz’s point centers on Obama’s broken promise.  Obama failed to deliver on the promise if premiums stayed the same or went up.

It’s grammatically possible to interpret Cruz’s claim as PolitiFact did.  But we think it counts as the wrong interpretation for two reasons.  First, it ignores the principle of charitable interpretation, which consists of giving the speaker the benefit of the doubt by preferring the interpretation that makes the best sense of a statement.  An interpretation that may be true makes better sense than one which is false.  Second, it violates the principle of parsimony.  That principle prefers simpler explanations to more complex ones.  Where Cruz only needed higher premiums for any reason to show a broken promise by Obama, PolitiFact’s interpretation adds an unnecessary condition, that the health care law caused the higher premiums instead of lowering them as promised.

It makes good sense of Cruz’s statement taking him to simply mean that premiums went up for almost everyone, therefore Obama’s promise was broken.

Why did PolitiFact offer no evidence in its fact check that it considered that perfectly reasonable interpretation?

Could Cruz mislead people into thinking the healthcare reform law increased premiums for nearly everyone?  His statement was mildly ambiguous, at least enough to make PolitiFact’s interpretation plausible.  But we think the average reader would understand Cruz’s point as we suggest.

“[Sen. Ted] Cruz said Obamacare has led to premiums going up and up and up for virtually every person.”

Charitable interpretation serves as one of the surest means of avoiding the straw man fallacy.  PolitiFact should have considered whether health insurance premiums generally increased in spite of Obama’s promise.