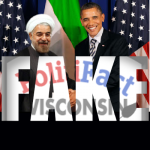 On July 24, 2015, PolitiFact Wisconsin published a fact check piggybacking on a recent BuzzFeed criticism of a political ad.

On July 23, 2015 BuzzFeed published a story about a political ad aired by Restoration PAC in support of the re-election campaign of Sen. Ron Johnson (R-Wisc.). The BuzzFeed story, by Ilan Ben-Meir, focused in part on one of the ad’s images, showing Iranian President Hassan Rouhani apparently clasping hands with President Obama.

BuzzFeed published an interactive image that helped exposed the fakery. 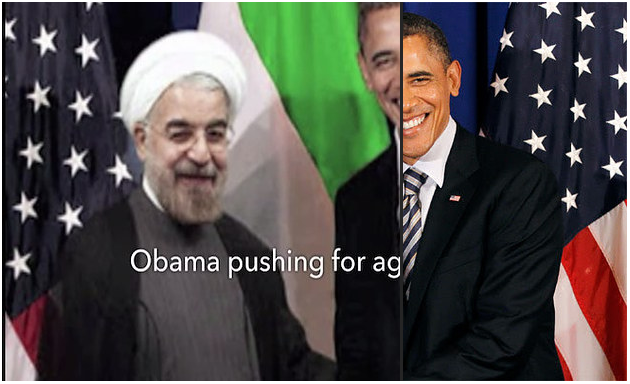 Why our interest in PolitiFact’s angle on this story? It serves as a good example of poor fact checking.

We’ll expand on the evidence supporting the claim the image is fake. And we’ll ding PolitiFact Wisconsin for nitpicking the Restoration PAC ad.

BuzzFeed could have, and should have, done a better job of proving the image was faked. One way to do that involves finding the original image and showing how it compares to the altered image. Buzzfeed made a half-stab at doing that with its interactive image. Readers could slide right to show the Rouhani-Obama image to the left (bearing the text “Obama pushing for agreement”) or slide left to show a suspiciously similar image with Indian Prime Minister Manmohan Singh in place of Rouhani.

We used image search engine TinEye to find whether the Singh-Obama image predates the Rouhani version. It does. And the close match on specific image details, such as the folds in the background flags and Singh’s hand outline, effectively cinch the deal.

“Pants on Fire” for Restoration PAC?

First let’s look at the “claim” PolitiFact Wisconsin understood from the ad:

Through an image in a TV ad backing Johnson, Restoration PAC claimed Obama had met with Iranian president Hassan Rouhani.

The point of the ad, pointedly, was not that Obama had met personally with Rouhani.

Restoration PAC spokesperson Dan Curry made that point to PolitiFact Wisconsin in a message the latter appended to its original article (bold emphasis added):

In a statement, Curry criticized BuzzFeed as “not able to provide any proof that the photo was fake” and noted the photo “is in circulation widely on the internet, posted on dozens of websites. There also are no articles directly claiming the image is fake. However, out of an abundance of caution, we are replacing the image with side-by-side Obama and Rouhani photos that makes exactly the same point.“

Curry makes a strong point with that statement, given PolitiFact’s statement of principles claims PolitiFact takes the context of a claim into account:

Context matters – We examine the claim in the full context, the comments made before and after it, the question that prompted it, and the point the person was trying to make.

The ad pushes the point that the Iran deal primarily benefits Iran. Whether Obama met personally with Rouhani hardly matters to that point. PolitiFact Wisconsin ignored the context of the ad and placed its focus narrowly on the image Restoration PAC used in making its point.

We delayed publication of this article for two days to give author Tom Kertscher and/or editor Greg Borowski to respond to our inquiry to them about the PolitiFact Wisconsin fact check. If we hear from either we will update this item.

We admonish PolitiFact Wisconsin with the reminder that consistency stands as the key to any set of principles. It is perfectly fair to point out that the Rouhani-Obama photo was altered and to fault Restoration PAC for uncritically using it in the ad. But setting aside guiding principles to produce a narrowly focused rating damages a fact checker’s claim to non-partisanship. We also fault PolitiFact Wisconsin for failing to expand on BuzzFeed’s attempt to prove the image was altered.