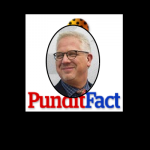 “[Glenn] Beck said that when Obama promised that people could keep the plans they like, he knew that half of all Americans would lose their health insurance. Beck is wrong in every respect. The primary study he relied on contradicts his number, saying that at most 50 million people would lose coverage, not 125 million.”

During a Nov. 4, 2013 broadcast of “The Glenn Beck Radio Program,” host Glenn Beck spent some minutes talking about health care, including President Obama’s pledge that the health care reform bill would allow Americans to keep their insurance plans if they like them.  PolitiFact’s “PunditFact” operation picked out one of Beck’s statements for a fact check:

“They had the studies that showed that up to 80 million people would lose their health insurance,” Beck said Monday on his radio show, which is syndicated on more than 400 stations. “Now we find out this week that number is actually 125 million. Half of the population in the United States, they knew half of the population of the United States would lose their doctor and their health insurance?

PunditFact said Beck’s team justified its numbers claim based on a news report in the conservative-leaning Daily Caller about the work of health care economist Christopher Conover:

“Bottom line: of the 189 million Americans with private health insurance coverage, I estimate that if Obamacare is fully implemented, at least 129 million (68 percent) will not be able to keep their previous health care plan either because they already have lost or will lose that coverage by the end of 2014,” he said in an email. ”But of these, ‘only’ the 18 to 50 million will literally lose coverage, i.e., have their plans entirely taken away. This includes 9.2-15.4 million in the non-group market and 9-35 million in the employer-based market. The rest will retain their old plans but have to pay higher rates for Obamacare-mandated bells and whistles.”

Conover himself takes issue with Beck’s use of his estimate.

“In my view, ‘lose their health insurance’ without any further qualification has a different connotation than ‘not be able to keep their previous health plan’,” he told PunditFact. “Absent any further explanation, many might interpret ‘losing’ health coverage as becoming uninsured.”

Does this cinch the deal?  Did Beck make a ridiculously false claim?

There’s a big problem with PunditFact’s reasoning, and the same error occurs with the testimony of each expert PolitiFact used in support of its reasoning. 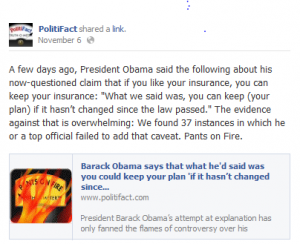 People often use “health insurance” or just “insurance” to refer to specific health care plans.  We found an example of PolitiFact using “insurance” to mean insurance plan in a Nov. 6 Facebook post (see image to right).

Beck, then, was using a term that can mean “insurance” generally or “insurance plan.”

Why did PunditFact settle on the definition least flattering to Beck?

Literary interpretation offers us one valid rationale for a move like that:  Context demands it.

Though PolitiFact often provides a link to the full context of a statement, sometimes it does not.  Statements made on radio programs tend to fall in the latter group.  PolitiFact/PunditFact offered little context for Beck’s statement, but we found a podcast version of the Nov. 4 show at SoundCloud.

Beck opened his show with a monologue, and toward the tail end of that, about 15 minutes in, started talking about President Obama’s broken “you can keep it” pledge.  We found the monologue transcribed at GlennBeck.com:

Beck starts talking again about Obama’s  pledge about 64 minutes into the program and stays on it for about four minutes, including the following (transcript ours):

OTHER IN-STUDIO
But that’s only 129 million …

OTHER IN-STUDIO
Which is 68 percent of everybody on private insurance.

In this segment we have strong evidence Beck was using “health insurance” to mean “health insurance plan,” just as people commonly do—including people who work with PolitiFact.  Beck says Obama was saying people could keep their “health insurance.”  A pedantic PunditFact ought to find fault with Beck’s description.  But to the contrary PunditFact ignores it to the point of automatically correcting the would-be error in its paraphrase of Beck:

Beck said that when Obama promised that people could keep the plans they like, he knew that half of all Americans would lose their health insurance.

There’s no good reason, in terms of fact checking principles, to interpret the same phrase differently depending on whether it refers to what Obama said or to the studies belying Obama’s claim.  The speaker rightly receives the benefit of any doubt, and the speaker’s comparison of the two leaves little doubt given that Beck used the same words in either comparison.

Indeed, one of PolitiFact’s past fact checks unerringly understood President Obama to mean “plan” when he simply used “health insurance” during one of his “you can keep it” pledges:

Obama has a reasonable point: His health care law does take pains to allow Americans to keep their health plan if they want to remain on it.

Why a different standard for the president?

Do Beck’s numbers add up?

PunditFact said Beck got everything wrong in his statement.  But what happens if we treat Beck the same way PolitiFact treated Obama?  About 300 million people live legally in the United States and nearly 12 million more live here illegally.

Taking Conover’s 129 million figure as a percentage of 300 million gives us 43 percent.  Calling that figure half the U.S. population counts as a stretch.  It’s not normal to round up to 50 from 43, but on the other hand “half” is often used as a rough approximation.  Using “half” definitely counts as imprecise, but not as ridiculously false.

“Beck said that when Obama promised that people could keep the plans they like, he knew that half of all Americans would lose their health insurance”

Taken very charitably, the statement is true.  But Beck said that when Obama promised people could keep their health insurance he knew that half of all Americans would lose their health insurance.  By editorially altering what Beck said PunditFact commits a fallacy of ambiguity (equivocation) that misleads the reader.  The fact check actively encourages a false understanding of Beck’s words.

“The primary study he relied on contradicts his number, saying that at most 50 million people would lose coverage, not 125 million.”

PunditFact’s charge loses its force with its fallacy of equivocation exposed.  Though Beck’s initial use of the 125 million figure was off, he later used the correct figure of 129 million, and that counts as very roughly half the U.S. legal population.

“Beck is wrong in every respect.”

Beck was trying to make the point that the president willingly misled Americans with his claim that Americans could keep their health insurance plans.  The context of Beck’s radio program, combined with heavy press coverage of the issue, makes it unlikely listeners would reach the same wrong conclusions PunditFact reached.

But the experts agree that what Beck said was misleading!

With all due respect to the experts PolitiFact contacted, their expertise applies to a technical distinction between “health insurance” and “health insurance plan.”  We’ve conclusively shown that people commonly use the terms interchangeably without any resulting misunderstanding.  We take seriously the point that we ought to prefer clear expression, but insisting that common language should always conform to technical usage leads quickly to pedantry.

Yes, what Beck said was potentially misleading, especially when taken out of context.  But his criticism of the president was on target and his numbers were reasonable approximations.