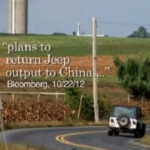 In the peer-reviewed article Revisiting the Epistemology of Fact-Checking, researcher Michelle A. Amazeen offers readers an example of the beneficial effects of good fact-checking:

When a framework of fact-checking becomes established, it should become more difficult for a politician to fabricate claims. For example, at the end of the 2012 U.S. presidential campaign, candidate Mitt Romney faced an impenetrable wall of fact-checkers. His claim that the Jeep-brand auto maker was moving its U.S. manufacturing to China was widely condemned and may have cost him the election (Holan 2012 ).

The “impenetrable wall” was made up of no less than the so-called “elite three” fact checkers, FactCheck.org, the Washington Post Fact Checker and PolitiFact.

But just how impenetrable was it? A Forbes fact check said the charge in the Romney ad, that Chrysler would build Jeeps in China, was true. Zebra Fact Check also questioned the conclusion at the time.

The careful reader will note that Amazeen doesn’t describe the ad the way Forbes describes it. She says the Romney ad claimed Chrysler was moving its Jeep manufacturing from the U.S. to China. But the ad didn’t say that.[cryout-pullquote align=”right” textalign=”left|center|right” width=”33%”]How can a fact-checker worthy of the name omit the number of Jeeps exported to China from a fact check of whether manufacturing Jeeps in China will cost American jobs?[/cryout-pullquote]

The “elite three” fact checkers all said the Romney ad implied Chrysler would move its Jeep manufacturing to China.

FactCheck.org touched on the implication only briefly in its fact check: “(H)is ad is misleading when it says that Chrysler is “going to build Jeeps in China.”

(T)he ad’s reference to Jeep production in China is technically correct but misleading, particularly in light of Romney’s comments on the campaign trail. The ad says that Obama “sold Chrysler to Italians who are going to build Jeeps in China,” but then adds: “Mitt Romney will fight for every American job.”

The unspoken message is that American jobs are being sent to China, even though the ad carefully tiptoes around that claim.

The Fact Checker relied quite a bit on “Romney’s comments on the campaign trail” to support claims about how the the ad misleads on manufacturing Jeeps in China. But Romney’s words on the campaign trail are not the Romney ad. Any argument asserting that Romney’s campaign rhetoric sets the meaning of a later radio or television ad ought to include a compelling explanation. But we don’t see that from the Fact Checker.

PolitiFact spun a tale not unlike the Fact Checker’s. PolitiFact spent four paragraphs telling readers about an incorrect statement Romney made about Jeep on the campaign trail and never discussed the Jeep claim from the ad until the story’s conclusion:

The Romney campaign ad says Obama “sold Chrysler to Italians who are going to build Jeeps in China” at the cost of American jobs. The ad leaves the clear impression that Jeeps built in China come at the expense of American workers.

Not one of the elite three fact checkers point out that Jeep was shipping tens of thousands of U.S.- built Jeep vehicles to China for sale in the Chinese market. As we’ve pointed out before, how can it not affect American workers if they no longer build tens of thousands of Jeeps for the Chinese market? Every Jeep built in China by Chinese workers shrinks the demand in China for a U.S.-built Jeep.

How can a fact-checker worthy of the name omit the number of Jeeps exported to China from a fact check of whether manufacturing Jeeps in China will cost American jobs?

The damage was done. The fact checkers and mainstream media smeared Romney over the ad. People like Amazeen thought (and still think) the Romney ad falsely said Jeep was moving its Jeep manufacturing to China, even though that wasn’t what the ad said or even implied. Now we have Amazeen writing that this fact-checking from the “elite three” may have cost Romney the election.

Amazeen uses the example to show the good effects of fact checking. If anything, it shows the ill effects of poor fact-checking.

In late January we finished work on a critical review of Michele A. Amazeen’s Checking the Fact-Checkers in 2008: Predicting Political Ad Scrutiny and Assessing Consistency, a peer-reviewed article set to appear in an upcoming issue of the Journal of Political Marketing. As we neared completion of our review, Amazeen had a related article published in Critical Review, titled Revisiting the Epistemology of Fact Checking. The latter work serves as Amazeen’s response to a journal article we reviewed in 2014, The Epistemology of Fact Checking by Joseph E. Uscinski and Ryden W. Butler.

We understand that Uscinski is working on his response to Amazeen, and the criticisms we published of her associated work also apply to sections of the new work. We’re content to let Uscinski have the first go at Amazeen’s latest. But Amazeen has repeatedly referenced the elite fact checkers’ treatment of Mitt Romney’s presidential campaign ad as a favorable example of fact checking in action. She does so again in Revisiting the Epistemology of Fact Checking. Having published a debunking of the way the elite fact checkers handled that case, this article takes a stab at having the final and authoritative word on the subject.