On April 10 we published a fact check of a House Democrat presentation of Social Security, claiming that Social Security has never added so much as a dime to the deficit.  We found the claim false based on the Social Security Administration’s reports of revenue falling short of expenses.

We’ve since surveyed the way various mainstream fact checkers treated similar statements.  We think the comparison does a great deal to show the potential subjectivity of the fact checkers.

We think Glenn Kessler of the Washington Post often does a great job on his fact checks, but in this case he blew it.  Kessler dealt with a two-part quotation from Rep. Xavier Becerra (D-Calif.) where one part mentioned the debt and the other part mentioned the deficit:

“Social Security has never contributed a dime to the nation’s $14.3 trillion debt…not one penny to our federal budget deficit this year or any year in our nation’s history.”
— Rep. Xavier Becerra (D-Calif.). July 8, 2011

Though the latter part of the statement is flatly false, Kessler focused the fact check exclusively on the debt implications of Social Security and awarded Becerra his rare-and-controversial “True but False” rating.

Kessler later evaluated a similar claim about the deficit from Dick Durbin (D-Ill.), who claimed “Social Security has not added one penny to the deficit.”  Kessler, without explaining why, treated Durbin’s statement as a claim about the debt and gave it one “Pinocchio”:

We try to avoid ruling on opinions, and to some extent this is a matter of opinion. But given the further decline in Social Security’s cash flow position in the past year, we are going to revise our ruling in this case and deem this “not one penny” talking point worthy of a Pinocchio.

We think fact checkers should properly distinguish between the deficit and the debt.

In August 2011 PolitiFact Texas evaluated a Social Security claim by the Alliance for Retired Americans.  The group claimed “Social Security doesn’t contribute a penny to the deficit.”  PolitiFact found the claim “Mostly False,” based on two-pronged and conflicting reasoning:

Our conclusion is that there’s a legitimate rationale for saying Social Security doesn’t contribute to the deficit. After all, it draws on a payroll tax to pay for itself and has built up $2.6 trillion in Treasury IOUs and interest to cover cash shortfalls.

However, when Social Security draws from its trust fund, as it did last year and will again this year, it is asking Treasury for money that has to come from the overall budget. And these transactions contribute to the overall federal deficit–not much perhaps, but more than a penny.

The rationale in the first paragraph fails to account for the fact that an excess from earlier years does not eliminate the fact of a deficit during a year where costs outstrip receipts.  The only way around that is by the highly dubious technique of claiming repaid loans as income.  And even that method loses all plausibility when considering the unified budget picture since the government is loaning money to itself. PolitiFact ends up finding the claim both true and false at the same time and in the same sense, giving the claim a final rating of “Mostly False.”

On Sept 29, 2011 PolitiFact Texas added a curious correction notice at the top of its story:

In November 2012 PolitiFact New Hampshire got in on the act, rating a statement by Sen. Jeanne Shaheen (D-N.H.).  Shaheen said Social Security “has not contributed to the debt and deficits.”

PolitiFact New Hampshire does a credible job of evaluating Shaheen’s claim, rating it “Mostly False,” but mirrors PolitiFact Texas’ lack of clarity about the exhaustion of trust fund assets:

Social Security trustees project the program’s cash deficit to exceed $60 billion over the next few years, and by 2033, the trust fund will no longer have enough money to cover full benefits for beneficiaries, according to the most recent estimates.

We don’t understand the preference for “no longer have enough money to cover full benefits” over “trust fund exhaustion.”

PolitiFact Georgia also addressed the issue with a January 2013 story rating a statement by Rep. Hank Johnson (D-Ga.).  Johnson tweeted that Social Security “has nothing to do with the deficit.”

PolitiFact Georgia’s fact check agreed with the other state PolitiFact franchises, right down to the “Mostly False” rating and the absence of a clear indication that the Social Security trust fund balance will hit zero in the 2030s without changes to applicable laws.

Instead, PolitiFact Georgia reports “Lawmakers are concerned that the federal government will have less money to pay recipients in the coming years.”

PolitiFact Georgia, after telling us that the Social Security trust fund has about $2.7 trillion in surplus, also gives us this:

Social Security, though, has been running deficits in recent years. The deficit was about $49 billion in 2010 and $45 billion in 2011, according to a 2012 Social Security trustees report. The average deficit will be about $66 billion between 2012 and 2018 as beneficiaries continue to grow at a faster rate than the number of covered workers, the report said.

That report, by the way, is the same one that gives us this handy chart: 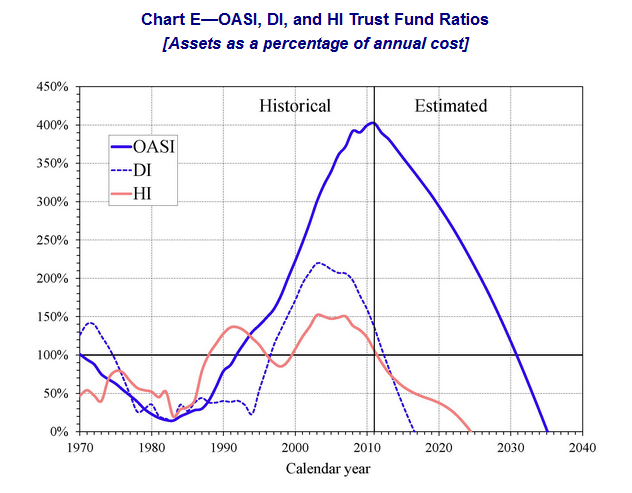 Lawmakers are concerned, or so we have heard.  We note that PolitiFact’s fact checks each  downplay the near-future exhaustion of Social Security trust fund assets.

What’s NewsTrust?  Good question.  It’s essentially a crowdsourced rating system for journalism where something like an elite crowd does the evaluations.  And NewsTrust was recently acquired by the Poynter Institute.  The Poynter Institute owns the Tampa Bay Times and PolitiFact.

NewsTrust’s “Truthsquad” looked at Sen. Dick Durbin’s 2011 claim that “Social Security does not add one penny to the deficit.”  The group found the claim half true.  The reasoning behind the ruling was poor:

Despite the tension between these opposing viewpoints, most observers seem to agree on these facts:
• Social Security is required by law to be self-financing
• Payroll taxes exceeded benefit payments regularly until 2010
• This generated a surplus of $2.5 trillion in the Social Security Trust Funds
• There is now a net shortfall which is expected to deplete the surplus by 2037
• Treasury borrowed from the surplus in the Trust Funds to pay for other programs
• The government is now having to borrow money to pay its Social Security obligations

Given this common ground, the main point of contention seems to be over who is to blame for this additional borrowing. Is the Social Security program at fault? Or is the federal government to blame for using the surplus to pay for other programs? Based on the evidence we found so far, we conclude that the government is primarily responsible for the additional borrowing — not the Social Security program, as detailed below.

Good thing the Truthsquad is looking out for us. By the end of NewsTrust’s partial vindication of Durbin we find Glenn Kessler’s argument cropping up again:

Dean Baker at the Center for Economic and Policy Research … points out that the Social Security program is designed by law to be entirely self-financing, and is “prohibited from spending any money beyond what it has in its trust fund.”

As we’ve pointed out, the trust funds carry over income from earlier years, including interest income from prior years.  Paying those obligations out of the general treasury increases annual deficits and requires the federal government to increase its borrowing.  Consideration of the unified budget pulls off the mask and exposes the face of the fiscal deception.

In this instance, Annenberg Fact Check shows why we consider it the gold standard among mainstream fact checkers.  The article summary gets right to the point:

Some senior Democrats are claiming that Social Security does not contribute “one penny” to the federal deficit. That’s not true. The fact is, the federal government had to borrow $37 billion last year to finance Social Security, and will need to borrow more this year. The red ink is projected to total well over half a trillion dollars in the coming decade.

As an added bonus, Annenberg mentions the exhaustion of the trust fund (bold emphasis added):

And keep in mind, if nothing is done, when those trust funds are exhausted, benefits would have to be cut by 22 percent in 2037, and more each year after that, according to the most recent report of the system’s trustees. By 2084, the system will generate only enough revenue to pay for 75 percent of promised benefit levels.

Social Security affects the federal deficit, though not every fact checker makes that clear.  Aside from obligating the federal government to pay back on demand money it borrows from Social Security and interest on top of that, we can view payroll taxes in terms of opportunity cost.  Personal income taxed to support Social Security cannot at the same time serve to pay down the existing debt.

“Social Security didn’t cause our deficit. Not one dime gets added to the deficit because of Social Security. It’s not allowed to, by law.”

The one-dime claim — likely to be repeated in one form or another as Congress debates Obama’s proposal — is about as absolute as it gets.

We see three notable features of the fact check from PolitiFact Wisconsin.  First, it continues PolitiFact’s tradition of silence regarding the projected exhaustion of the trust fund in the 2030s.  Second, as with other fact checks from PolitiFact, it takes the absolute “one-dime claim,” finds it off by mere tens of billions of dollars and then proceeds to rate it “Mostly False.”  Third, PolitiFact Wisconsin never specifically identifies for its readers the grain of truth that justifies the “Mostly False” rating.  PolitiFact communicates the explanation from Rep. Pocan’s office without judgment, and then contradicts that explanation with evidence along with testimony from expert sources.  In the summary section of the story we find out that other PolitiFact franchises rated similar claims “Mostly False.”  So maybe that’s the justification.  PolitiFact says it’s mostly false, therefore it’s mostly false.