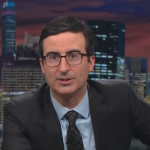 A viral video featuring the latest news comedian’s take on the climate change debate caught our attention this week.

Comedian John Oliver’s HBO program “Last Week Tonight with John Oliver” follows a trail blazed by John Stewart and Stephen Colbert.  As with Stewart and Colbert, we’re willing to cut Oliver a break on the accuracy of his content.  He’s a comedian, not a newscaster.  But sometimes, as with a speech from “The Newsroom” by the fictional Will McAvoy, clips from these shows sometimes go viral and widely influence the public’s thinking.

On the third episode of Oliver’s show, debuting on May 11, Oliver participated in a segment he called the “statistically representative” climate change debate.  Oliver introduced the segment with a monologue spiced with language not safe for work.

Oliver started with a few jokes that had little of interest to a fact checker.  We’ll pick up where Oliver piqued our interest:

You don’t need people’s opinions on a fact.  You might as well have a poll question asking which number is bigger?  Fifteen or five?  Or, do owls exist?  Or, are there hats?  The debate on climate change should not be whether or not it exists, it’s what we should do about it.  There was a mountain of research on this topic.  Global temperatures are rising.  Heat waves are becoming more common.  Sea surface temperatures are also rising.  Glaciers are melting and of course no climate report is complete without a photo of a polar bear balancing on a piece of ice.

Oliver immediately frames the debate in ambiguity.  Does “climate change” mean the same thing as human-caused climate change?  All of his examples skip that issue, leaving the question of the cause unsettled.

So far as we can tell, even if one out of four Americans is wrong for viewing global warming with skepticism, it’s still accurate to report the poll’s results by saying “A poll finds that one out of four Americans are skeptical about something.”  We’ll chalk Oliver’s apparent mistake up to hyperbole.  Probably Oliver’s trying to say that reporting they’re skeptical leaves out the supposed fact that they’re also wrong.

Because, a survey of thousands of scientific papers that took a position on climate change found that 97 percent endorsed the position that humans are causing global warming.

Clearly on this subject we need to stay wary of fallacies of ambiguity.

Oliver goes on to object to the way television treats the debate.  He says the debates feature one for and one against.  That observation leads to the debate segment.

More often than not, it’s Bill Nye the Science Guy versus some dude.  And when you look at the screen it’s 50-50, which is inherently misleading.  If there has to be a debate about the reality of climate change, and there doesn’t, then there is only one mathematically fair way to do it.

Oliver’s concept of mathematical fairness underpins the logic of the segment.  But what does “mathematical fairness” mean?  Oliver uses it to mean that the audience should be able to tell from the debate how many agree with each side.  Note again that Oliver found it irrelevant how many Americans were skeptical of global warming.  Their opinion was irrelevant as to the facts.  Presumably if three out of four were skeptical that majority view would also count as irrelevant.  But for some reason, the numbers turn important for the sake of Oliver’s concept of a statistically representative debate.

Again, let’s take a look at Oliver’s framing of the debate.  The “climate change denier” is not introduced as a scientist.  Neither are the two who join him onstage for the debate.  In contrast, nearly all of the “96 scientists” who agree with Nye wear lab coats.  Though Oliver is drawing the 97-3 proportion from a study of scientific papers, the debate format strips the “climate change deniers” of their scientific standing.  The technique allows the audience to easily associate the three debate participants with the group Oliver says is wrong about climate change.

So what’s wrong with this picture?

The debate is dressed up as a legitimate appeal to authority.  In reality, it’s another appeal to popularity.  Remember, the three “climate change deniers” seated at the left side of the table represent 3 percent of opinions skeptical of global warming published in scientific journals. It’s as though 3 percent of mathematicians tell us 5 is greater than 15, 3 percent of owl experts tell us owls do not exist or 3 percent of haberdashers assure us there are no hats.

If it’s right to pay attention to legitimate experts, and it is, then it’s also right to pay some attention to the math expert telling us five is greater than 15.  After that, it’s up to each of us to find one set of experts more persuasive than the other.

It’s fine, by the way, to give some weight to a majority opinion among experts.  But in terms of logic, the majority opinion of experts is no more a sure guide to the truth than any other fallacious appeal to popularity.  The foremost measure of the truth is the strength of the argument.

So why don’t we get the case for global warming in terms of science instead of in terms of an imperfect scientific “consensus”?

The picture is far more complicated than that.  It’s so complicated that even relatively sophisticated laymen will tend to get lost in the weeds.  We don’t like to admit we’re lost in the weeds, so we gravitate toward the simple story that appears to make sense.  If we have a television show maybe we’ll produce a segment to attack those who don’t accept the beauty and simplicity of the story we accept.

When the case for human-caused climate change is truly comparable to the question of whether hats exist, there will be no need to use fallacies and other rhetorical tricks to convince people to buy it.

Below, find a safe-for-work version of the “statistically representative” climate change debate.  We also have a version posted on YouTube, also safe for work, with a few annotations.

Update Dec. 27, 2017: We note that the link we used originally to describe complexities in the pattern of causation for global warming no longer features the information present when we posted our article. We found an archived version of that material here, but have replaced it in the text with a different citation.