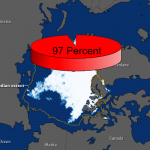 Last week, we published a fact check of a new Organizing For Action campaign designed to expose Republican “climate change deniers” in Congress.  One of the features of OFA’s attack ad was its claim of a 97 percent consensus among scientists on climate change. We noticed a few problems with the support typically offered with that and similar claims, and…
Read more