The Atlantic: “It’s not the rating that matters.”

The Atlantic recently published a column about fact checking by Alesh Houdek.  Houdek asks a question and by the end he gives us an answer.  The answer reveals the key problem with modern fact checking, though Houdek apparently doesn’t completely see it.

The question (from the story’s deck):

Seen from the right angle with the right squint, the claim that PolitiFact named 2012’s lie of the year looks like the truth. What does that mean?

Houdek makes some appropriate observations, such as the subjectivity of the various rating scales mainstream fact checkers use, but he reaches an incredible conclusion.

It’s not the rating that matters, but the deep dive into the facts behind a statement and the vigorous debate that it engenders.

Put another way, the ends justify the means.

If it’s okay for some of the most popular fact checkers to use misleading and subjective ratings systems to make judgments on partisan political speech, then why can’t the politicians claim a share of that credit?

It’s not the accuracy of the political claim that matters, it’s the vigorous debate that it engenders.

It’s not the accuracy of the political claim that matters, it’s the effect it has on the electorate.

Houdek leaves out a key component of the Romney/Jeep controversy:  PolitiFact fact checkers misled in their judgments of the ad just as surely as the ad misled viewers in the first place–if not more so.  Romney’s ad, after all, did not make the explicit claim that fact checkers used as their pretext for condemning it.  In comparison, fact checkers deliberately conflated the ad with a speech in which Romney mischaracterized a news article he had seen.   Annenberg Fact Check did it.  The Washington Post Fact Checker did it.  PolitiFact did it.

To get readers to understand the misleading message of the ad, the fact checkers had to introduce readers to a statement from Romney with which they would probably otherwise be unfamiliar.  The fact checkers took an ad featuring true statements and an overall ambiguous message and presented it as a deliberate deception pushing a very clear message.  The hidden context was the key to understanding Romney’s supposedly dishonest strategy.

“It’s not the rating that matters.”

Of course the rating matters.  The rating is the blaring mainstream media message that just happens to fit, more often than not, with the Republicans/Romney liar meme.  That’s why, for example, fact checkers at PolitiFact in 2008 gave then-candidate Barack Obama a “Mostly True” rating for saying Biden wrote the Violence Against Women Act after which domestic violence “dropped dramatically.”  PolitiFact admitted Obama was sending a false message with his statement.  But they don’t nominate “Mostly True” statements for “Lie of the Year,” do they?

Claiming the rating doesn’t matter gives fact checkers tacit permission to present their subjective opinions as though they are facts.

The ratings matter because they are imprecise summaries used primarily to help pique reader interest.  Their imprecision and subjectivity regularly mislead readers, especially those who do not bother giving the accompanying stories a thorough read.  And having the summary makes it easier to skip the details.

Annenberg Fact Check is right to avoid using such flawed gimmicks.  We can either excuse fact checkers for engaging in deception with such devices or else demand that they change what they’re doing.

Let’s not pretend it doesn’t matter. 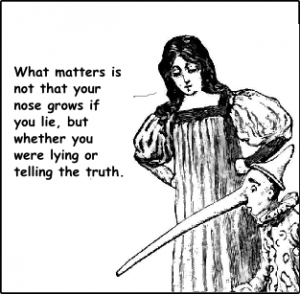