The House Republicans and the sequestration blame game

President Obama proposed the sequester.  But Republicans who agreed to or voted for the sequestration deal get to share ownership of the policy once implemented.

Reporter Bob Woodward reported in his book “The Price of Politics” that the budget sequestration idea, particularly for military spending, came from the White House.

The blogger at GOP.gov linked a report from POLITICO to that effect.

Woodward reports in his book that White House Office of Management Director Jack Lew and Legislative Affairs Director Rob Nabors took the proposal for sequestration to Senate Majority Leader Harry Reid, and then it was presented to congressional Republicans.

Congress struck a deal on the debt ceiling in August 2011 that triggered sequestration in the event a bipartisan super committee failed to reach agreement to meet a set goal on spending cuts.  The super committee failed to reach agreement by its Nov. 23, 2011 deadline.  Sequestration would impose steep mandatory cuts, half of which would come from the Department of Defense.

The plan was reportedly to make the sequestration option so unpleasant for both parties that it would provide abundant motivation for striking an alternative deal.

The statement at GOP.gov does a good job of narrowing its meaning.  A subheading follows the attention-grabbing headline and states “President Obama and His Operatives at the White House Proposed the Sequester,” making the meaning very clear for readers.  The body of the item follows in the same vein, providing a set of sources supporting the claim in the headline.

On the facts, then, the claim is true.  But the House Republicans are sending an implicit message in announcing the Obama administration’s responsibility for the idea:  We Republicans aren’t responsible for the consequences of the sequester.

It’s not that simple. 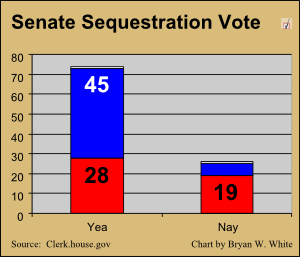 Responsibility for the effects of an idea spreads to those who implement the idea.  The sequestration deal had bipartisan support in Congress from the House and the Senate, and that means it had at least some Republican support (see voting charts).  Majorities of the Republican contingent in both houses also supported the measure, while Democrats in the House split evenly and 45 Senate Democrats supported it.  In the House, 174 Republicans voted for the deal while 66 voted against.  In the Senate, 28 Republicans voted for the deal while 19 voted against.

The source of the idea does not diminish Republican responsibility for voting for the plan.  The Republicans can make a fair point that the Democrats provided the greater part of the push behind the sequestration legislation.  This factoid pinning the blame for the idea on Obama appears to serve the dual purpose of distracting the audience from remembering  the blame earned by Republicans who supported the measure.  Though the fallacy in some ways resembles a hybrid between tu quoque and the genetic fallacy, we think it’s best described as a false cause for its role in diminishing Republican blame.

Did the Obama administration come up with the sequestration idea?  Yes.  Does that make President Obama entirely responsible for the measure if it goes into effect?  No.  Obama will rightly bear the greater part of the blame.  But he couldn’t have done it without Republican help in Congress.

Judging from the site stats, people are curious about which members of Congress voted for the deal that may end up bringing us sequestration.  The last two references below lead to the roll call votes for the House and the Senate, respectively.  Click and go.

The original version of this story used the wrong roll call vote from the House as background.  The mistake resulted in a number of errors in the text and an accompanying graphic.  Find details in a post on our Corrections page.  We regret the error and apologize to any who were misled as a result.