Universal coverage under the ACA costs the same as the Medicare drug benefit program over 10 years? 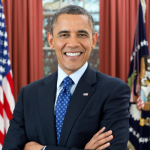 “The total cost of the Affordable Care Act to provide health insurance for every American out there at an affordable rate is costing about the same amount over the course of ten years as the cost of the prescription-drug bill that President Bush passed.”

The president simplifies a complicated picture in ways that mislead his audience.

First of all, I think it’s really important to point out here that the total cost of the Affordable Care Act to provide health insurance for every American out there at an affordable rate is costing about the same amount over the course of 10 years as the cost of the prescription drug bill that President Bush passed — except that wasn’t paid for.  We felt obliged to actually pay for it and not just add to the deficit.

The Congressional Budget Office reports the 10-year cost of the ACA at around $1.3 trillion:

CBO and JCT’s current projection of the budgetary impact of the ACA’s coverage provisions is $1,363 billion over the 2014–2023 period. That amount represents an increase of $40 billion from the February 2013 estimate of $1,323 billion.

The CBO’s latest 10-year estimate, which takes into account the administration’s decision to delay the employer mandate for one year, comes to $1,375 billion.

We did not find any projections from the CBO for the expenses of Medicare Part D, the Medicare program resulting from the Medicare drug benefit supported and signed into by President Bush in 2003.  But the Center for Medicare and Medicaid Services has actuaries who project future expenses.  A report available through the CMS, the “2013 Annual Report of the Boards of Trustees of the Federal Hospital Insurance and Federal Supplementary Medical Insurance” projects Medicare Part D expenses through 2022 (Table II.F1), showing a total expense of about $1.2 trillion over 10 years.

We chose to do this fact check after reading an article by Jeffrey H. Anderson in National Review.  Anderson offered a brief but vigorous criticism of the president’s accuracy:

The problems with this statement are that, as observed above, Obamacare wouldn’t come close to providing “health insurance for every American” over ten years — the CBO projects that it would fall 31 million Americans short — and that it’s projected to cost $1.8 trillion over its real first decade (2014–23), while the total cost of the Medicare prescription-drug plan (Medicare Part D) over its real first decade (2006–15) is projected to be $649 billion (see Table III.D3). That’s about a 3-to-1 ratio, not “about the same.”

“Health insurance for every American out there”

“At an affordable rate”

We won’t try to rate the truth of this statement since “affordable” carries with it a subjective judgment.  But we’ll note that leaving 8 percent of the population uninsured at least argues that some people will find the price of insurance unaffordable.

“Costing about the same amount over the course of ten years as the cost of the prescription-drug bill that President Bush passed.”

Anderson says the cost of the ACA comes in about 3 times higher than the cost of the Medicare drug benefit.  We would quibble with his method.  If one compares the 10 year costs from an older set of 10 years then it’s appropriate to adjust for inflation.

We’re inclined to offer Obama more charity than that.  Comparing projections covering parallel 10-year spans, the ACA spends over $1.3 trillion to Medicare Part D’s $1.2 trillion.  That’s pretty close.  But neither is it the end of the story.

Why don’t we follow along with Anderson’s method of counting only general fund costs as the cost of Medicare D?  We think his approach has some merit, yet one might argue that the ACA’s taxes and fees similarly reduce its budget effects. 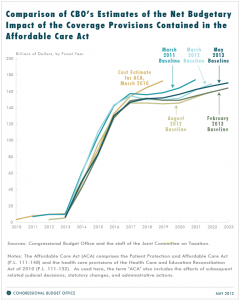 The complicated funding picture for the two measures resists easy comparison.  Medicare Part D provides a voluntary insurance program funded through the Treasury, consumer premiums and state contributions.  The ACA makes insurance mandatory, albeit with a very weak enforcement mechanism, and it receives funding from government subsidies and consumer premiums.  By design, much of the increased cost is placed on insurance consumers through their payment of premiums.  That why the law requires citizens to buy health insurance.

Obama’s comparison does not appear to take into account the differences between the costs borne by consumers on top of the amount collected in taxes and fees.  Nor does the comparison acknowledge how the ACA’s design backloads its costs (see embedded CBO graph).

We think it’s a stretch to compare the cost of providing medication coverage for over 19 million high-risk Medicare beneficiaries to the cost of providing general insurance coverage to 25 million uninsured people, or 50 million if we take the first part of Obama’s claim at face value.  The value of the coverage varies as does the amount of risk for the insured populations, and general health insurance will tend to have a higher out-of-pocket cost for consumers, through their premiums, deductibles and copays, than the Medicare drug benefit.  In these respects the comparison involves apples and oranges.

The comparison has one fair point:  Both measures increase costs over $1 trillion from 2013 through 2022.  But the fair point may easily mislead without the rest of the story.

The ACA will not provide insurance for all the approximately 50 million uninsured Americans.  Obama knows this.

The price will rise for some people and drop for others while health care costs nationally will increase.  “Affordable” is too slippery to rate as a fact, though it serves the fallacy of ambiguity very well.

“… costing about the same amount over the course of ten years as the cost of the prescription-drug bill that President Bush passed.”

Charitably compared during the same contemporary time frame and ignoring Obama’s claim of universal coverage, the costs for the Medicare Part D drug benefit are similar to the costs of the ACA.  The latest available projections we found showed the ACA costing about 15 percent more than Medicare Part D from 2013 through 2022.  As we point out above, however, the comparison largely involves apples and oranges.  Much of the ACA’s funding occurs informally through higher premiums charged by the private insurance market.  It’s like a tax where the government skips its usual role as the middleman.

The apples-to-oranges comparison creates an implicit fallacy of one-sidedness.

“CBO’s Estimate of the Net Budgetary Impact of the Affordable Care Act’s Health Insurance Coverage Provisions Has Not Changed Much Over Time.” CBO. Congressional Budget Office, 14 May 2013. Web. 11 Oct. 2013.