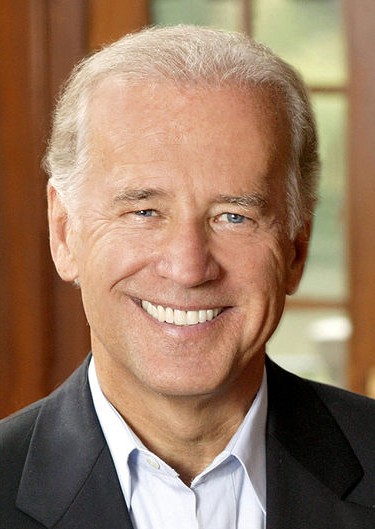 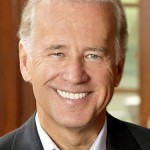 Vice President Joe Biden:  “They talk about this Great Recession if it fell out of the sky, like, ‘Oh, my goodness, where did it come from?’ It came from this man voting to put two wars on a credit card, to at the same time put a prescription drug benefit on the credit card, a trillion-dollar tax cut for the very wealthy. I was there. I voted against them. I said, no, we can’t afford that.”

The recession very probably did not result from any combination of wars, prescription drug benefits or tax cuts.  The recession stemmed primarily from the burst of a housing bubble that inflated over a prolonged period as well as from reliance in the financial sector on investments tied to home mortgage.

Biden voted in favor of the measures giving congressional permission for wars in Afghanistan and Iraq.

The largest growth of the federal deficit as a percentage of GDP started with the steep loss in revenue associated with the recession.

CBO graph. Note the decrease in the deficit as a percentage of GDP around 2005 with “credit card” spending under way.

The experts tend to focus on various aspects of monetary policy in fixing blame for the “Great Recession.”  Biden’s summary reflects nothing of the mainstream view.  It’s either false or an extreme exaggeration to claim the cited Bush policies created the recession.

Every communicator deserves charitable interpretation, Biden no less than anybody else.  The vice president’s argument closely matches the pattern of a common liberal argument for blaming the deficit on the Bush administration.  Because the literal meaning makes so little sense in comparison, it makes sense to conclude that Biden misspoke.  He probably intended to fix blame for the deficit, not the recession.

The CBO chart above helps place the charge in context, showing as it does a shrinking deficit near 2005 with all the supposed causes of the deficit in full effect.  That chart suggests that revenue lost to the recession contributed significantly to the deficit. 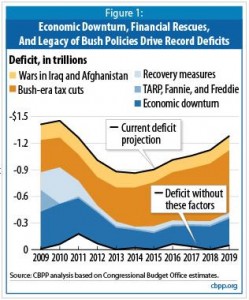 Center on Budget and Policy Priorities argues for a strong influence on the budget deficit from Bush-era policies (see chart to right).

Issue settled?  Is Biden right?  It’s not as easy as that.  The chart makes the deficit look almost flat without the Bush policies, but Medicare and Medicaid are two of the biggest drivers of the federal deficit.  The CBPP chart serves an agenda.

Reasons to discount the chart at face value: 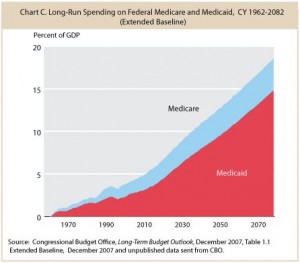 The Tax Policy Center apparently reversed the labels on this chart. Medicare represents the greater expense.

Unlike the debt, the deficit is new every year.  If Biden wants to take credit for renewing, favoring and making permanent the Bush tax cuts for middle-income Americans then he has to shoulder some of the responsibility for lost revenue and a rising deficit.  By the same token, the deficit was shrinking year by year until the recession stifled tax revenue.  The spike in the deficit for fiscal 2009 mostly occurred based on that revenue loss plus the cost of TARP and other bailout loans.  So, yes, the deficit “fell out of the sky” based on those two factors.  Subsequent budgets should benefit from increased tax revenues as the economy recovers as well as from repayment of the loans that added so much to the deficit in 2009.

Biden deserves a break on the charge that he’s claiming to have voted against the wars in Afghanistan and Iraq.  It’s reasonable to interpret him to mean he did not favor using deficit spending to finance the wars, though that implies that Biden favored some sort of tax increase during the recession of the early 2000s.

In short, blaming present-day federal budget deficits on Bush just doesn’t work very well.  Taken charitably, Biden’s statement is little more than blame-shifting with a meager basis in fact.  Bush’s policies did increase the deficit and the debt.  President Obama continued to add to both, with more recent appearances of a sizable decrease in the federal deficit relying largely on the comparison with an atypical FY 2009 and a congressional budget deal.