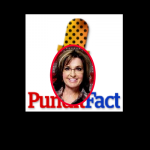 “Palin wrote on Facebook, “As unbelievable as it sounds, your tax dollars are funding the federal government’s Zombie Apocalypse Plan. I kid you not.”

PunditFact’s ruling hints it used zombie-like research methods to fact-check Palin, followed by zombie-like stubbornness in refusing to update its ruling when presented with more evidence. 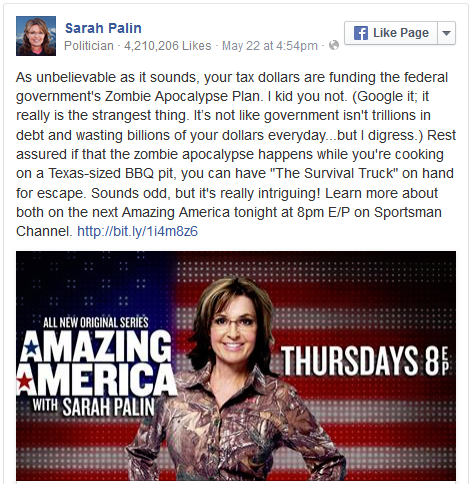 On May 22, 2014, Sarah Palin posted an item on her Facebook page claiming the government spends tax dollars on a “Zombie Apocalypse Plan.”  Palin suggested her readers research the issue to confirm what she said.

PunditFact said it took her advice and did some research.  PolitiFact assured its readers there is no government plan for a zombie apocalypse, rating Palin’s statement “False.”

The same day it published its story, PunditFact updated it, acknowledging the existence of “a 2011 military training document that included plans for a zombie attack.”  PunditFact declared that the document wasn’t really a plan, and said it would not change the “False” rating for Palin’s claim.

Palin’s claim is based on a public outreach strategy developed by the communications office of the Centers for Disease Control and Prevention in 2011.

The Centers for Diseases Control

We trust PolitiFact covered the CDC’s use of the zombie apocalypse theme adequately:

In this case, the CDC was using an unorthodox tactic to disseminate real information. People may argue with the method, but the campaign was designed to get people prepared for real disasters.

The CDC says the zombie apocalypse campaign did not require outside contractors and did not take much time. Essentially, the project cost the hours that it took to produce it by its in-house staff. We asked for more specifics but did not hear back by our deadline.

There’s more, but the two paragraphs serve well as a summary.  The CDC story dates from 2011.

The Department of Homeland Security

As noted above, the DHS use of the zombie apocalypse theme follows the approach used by the CDC.  The Huffington Post sums up:

“The zombies are coming!” the Homeland Security Department says.

Tongue firmly in cheek, the government urged citizens Thursday to prepare for a zombie apocalypse, part of a public health campaign to encourage better preparation for genuine disasters and emergencies.

CNN was among the news outlets reporting in May 2014 on a Pentagon plan for dealing with a zombie apocalypse:

Washington (CNN) — Never fear the night of the living dead — the Pentagon has got you covered.

From responses to natural disasters to a catastrophic attack on the homeland, the U.S. military has a plan of action ready to go if either incident occurs.

It has also devised an elaborate plan should a zombie apocalypse befall the country, according to a Defense Department document obtained by CNN.

How did PunditFact miss it until after publishing?

The Pentagon’s plan consists of an unclassified document known as “CONOP 8888,” as reported by Foreign Policy magazine.   As with the CDC use of the zombie apocalypse theme, the Pentagon’s plan uses fictional zombies to make training more effective.  But in this case there’s a plan.

Was Palin’s statement true if the plan isn’t intended to defend against real zombies?

PunditFact originally said there was no government plan to deal with a zombie apocalypse, and ruled Palin’s claim “False.”  Later, PunditFact said there was a plan but it wasn’t really a plan.

Foreign Policy magazine found a 2011 military training document that included plans for a zombie attack. But it’s not really a “plan.” It’s part of a training exercise, the magazine reported.

There is a government plan to deal with a zombie apocalypse.  But it’s a vehicle for training intended to develop preparation skills for situations other than a zombie apocalypse.  Palin accurately, though incompletely, told her readers about a contemporary news story, and invited them to look into it themselves.  A simple Google search should have produced results including the story on the Pentagon’s zombie apocalypse plan.

Though PunditFact rated Palin “False” on her statement, the evidence suggests “Half True” better fits in this case.  That’s using PunditFact’s rating system, a system we do not endorse.  We think there’s little wrong with Palin’s statement when considered in context.  There’s a Pentagon plan for dealing with a zombie apocalypse, and Palin makes no effort to convince her audience the plan is literally intended to deal with real zombies.  Instead, she focuses on the government waste angle.  If making it about zombies improves the quality of training enough to make up for the costs involved, then the Pentagon’s plan serves as a poor example of government waste.  Otherwise, there’s nothing wrong with what Palin said.

Palin was posting about an item of interest from the news, making a political point about government spending, and plugging her television show.  In context, her statement meets reasonable standards for accuracy with the possible exception of her criticism of government waste.  Anyone taking Palin’s advice about looking up the zombie apocalypse plan shouldn’t have any trouble grasping her point.

There’s a Pentagon plan for dealing with a zombie apocalypse, and news stories about it started appearing about a week before Palin posted about it to Facebook.  PunditFact initially missed it.  Later, PunditFact acknowledged the plan exists, yet said its “False” ruling stood.  That ruling flies in the face of the full set of facts.

PunditFact’s claim is false, and its original version of the story serves as a good example of fact checking done poorly.  PunditFact’s insistence on sticking with its “False” rating when new evidence came to light helps show the subjectivity of its rating system.

PunditFact’s declaration that the plan isn’t really a plan qualifies as a “No True Scotsman” fallacy.