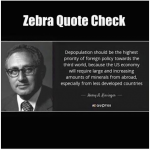 Quote Check: Attributed to former Secretary of State Henry Kissinger: “Depopulation should be the highest priority of foreign policy towards the third world, because the US economy will require large and increasing amounts of minerals from abroad, especially from less developed countries.”   Overview We found no good evidence to support attributing the above quotation to Kissinger.   The Facts…
Read more