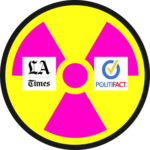 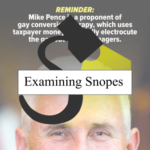 “Mike Pence once supported the use of federal funding to treat people ‘seeking to change their sexual behavior.’” —Snopes.com, from a fact check published on Oct. 27, 2016   Overview Snopes’ fact check does too much to leave legs on a legless claim about Pence supporting the use of federal funds for gay “conversion therapy.”   Background Facts Republican vice…
Read more