Murders up or down under Mayor DeBlasio? 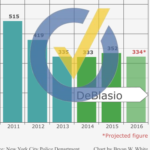 PolitiFact came down on Clinton’s side, but the numbers do not back PolitiFact’s judgment.

During the presidential debate held on Sept 26, 2016, major party candidates Hillary Rodham Clinton and Donald Trump clashed over the “stop-and-frisk” police policy Trump encourages. That part of the debate segued to a disagreement about whether the murder rate in New York City was falling or rising:

[TRUMP]But we went from 2,200 to 500. And it was continued on by Mayor Bloomberg. And it was terminated by current mayor. But stop-and- frisk had a tremendous impact on the safety of New York City. Tremendous beyond belief. So when you say it has no impact, it really did. It had a very, very big impact.

CLINTON: Well, it’s also fair to say, if we’re going to talk about mayors, that under the current mayor, crime has continued to drop, including murders. So there is…

TRUMP: Murders are up. All right. You check it.

PolitiFact fact checked Trump’s statement that “Murders are up” and found it “Mostly False.” PolitiFact looked at changes in the murder rate from a number of baselines, justifying its ruling by saying nearly all the comparisons showed a drop in the murder rate:

At the debate, Trump said that In New York City, “murders are up.”

For virtually any time frame you can look at, including the year to date, murders in New York City are down. We rate the statement Mostly False.

PolitiFact chose a strange method of fact-checking Trump’s statement, almost as though it was rehashing an older fact check it had done of Trump’s claim that crime is rising. PolitiFact treated that earlier claim questionably as well, interpreting Trump to say that President Obama had ushered in a new trend of rising crime that should show up in data over the past several  years. But the context was totally different in this case. The Democratic Party candidate, Clinton, said that crime, including murders, was down under New York City’s new mayor, Bill DeBlasio. Trump denied that claim, saying murders are up.

The context limits the relevant time frame to an increase during Mayor DeBlasio’s term in office, which started on Jan. 1, 2014.

Taking the context into account ought to have made for a very straightforward fact check. Graph the number of murders in New York City over a period of years and see how DeBlasio’s term stacks up against the earlier years. Instead, PolitiFact relied on one primary source that did not list the number of murders by year: 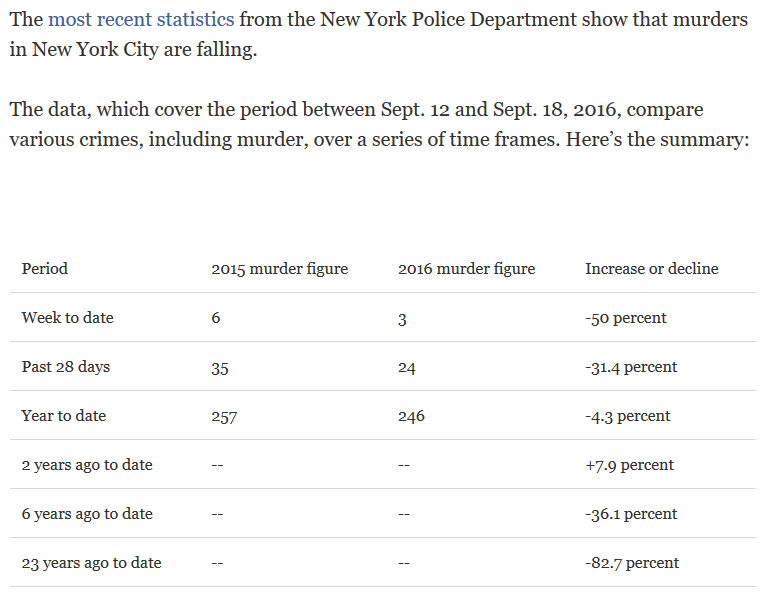 Only one of the comparisons comes close to corresponding to DeBlasio’s term in office. That is the fourth line of data, representing a two year period and showing an increase in murders of 7.9 percent.

By piecing together government figures from different years, we put together a chart that tells a similar story. 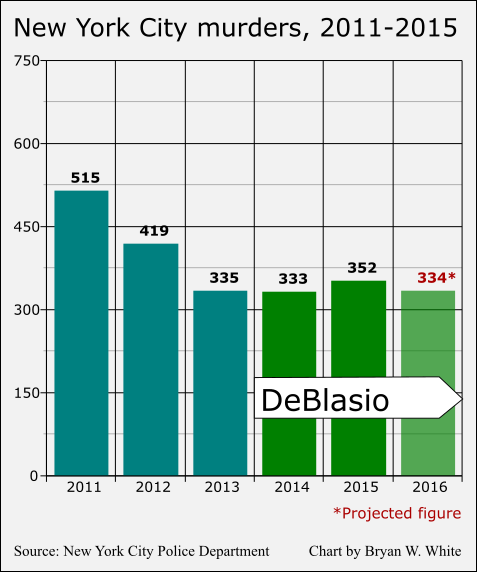 A few notes to help understand the meaning of the chart:

The chart shows support for Trump’s claim that murders in New York City are increasing, though the increase is very small.

The chart can only support Clinton’s claim about decreasing murders by infinitesimal decreases in 2014 and (projected) 2016. That method ignores the minor increase in 2015.

We judge it fair for Trump to call Clinton’s claim false. And for the last full year for which we have data, Trump is right that the number of murders rose.

We hasten to add that Trump getting the better of Clinton on New York’s murder rate does little to help his debate point about the effectiveness of stop-and-frisk. The murder decreases in New York City follow a nationwide pattern of falling crime rates. And by no means does it necessarily follow that ceasing the stop-and-frisk method in New York accounts for the flat murder trend under DeBlasio.

If PolitiFact’s headline is taken out of context from the story that follows, one could take it as true. The rise in murders in New York is small under Mayor DeBlasio. Calling the number of murders “flat” offers a more accurate picture. Moreover, in the wider context of the debate, the slight rise in murders offers a very poor evidence of the effectiveness of the stop-and-frisk police technique.

However, when Trump said murders were rising in New York City, in the immediate context he was contradicting Clinton’s claim that murders were going down under DeBlasio. The small rise in murders from 2013 to 2015 contradicts Clinton’s claim, and in this context Trump makes a solid and appropriate point. PolitiFact either did too little digging to find the increase from 2013 to 2015, or else chose to omit a key fact from its fact check.

Meares, T. L. (2015). Programming errors: Understanding the constitutionality of stop-and-frisk as a program, not an incident. The University of Chicago Law Review, 159-179.