Glenn Kessler defends his use of the Neil Newhouse quotation

Early on Dec. 31, 2014 we published a critique of the way the three major mainstream fact checkers, FactCheck.org, the Washington Post Fact Checker and PolitiFact, used a 2012 quotation from Romney campaign pollster Neil Newhouse. Glenn Kessler, the Washington Post Fact Checker, didn’t waste much time in responding. That’s one thing we absolutely love about the guy. On Twitter,…
Read more

Pushback on the Will McAvoy speech 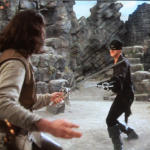 Did Will McAvoy’s speech on “The Newsroom” make sense? We’ve looked forward to surpassing the transparency of more established fact check sites by regularly answering the best criticisms we receive.  Sadly, we haven’t had much to work with over the first year or so.  We’ve decided to begin highlighting criticism by replying to a critique from “Arseny.”  Arseny objected to…
Read more