Of pistols and PolitiFact Georgia 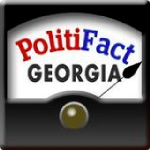 “(Sen. Bill) Jackson said there were more people killed with hammers than shotguns and pistols and AK-47s. There were actually 12 times as many people killed with handguns in 2011 than with blunt objects like hammers. Jackson’s claim is way off.” –PolitiFact Georgia, from “Gun claim goes awry,” Feb. 21, 2013   Overview PolitiFact conducted its fact check under the…
Read more