Of pistols and PolitiFact Georgia

PolitiFact conducted its fact check under the mistaken impression that “pistol” and “handgun” are interchangeable terms.  As a result, PolitiFact Georgia never gets around to checking the relevant facts from Sen. Jackson’s statement.

State senator Bill Jackson stated that more people were killed with frying pans and hammers (blunt objects) than with “shotguns and pistols and AK-47s.”

Here are the 2011 FBI totals (the most recent year available) for the types of weapons used in homicides:

As you can see, there’s a big difference between the handgun total and the rifles total and the total for shotguns. Webster’s defines a pistol as a handgun.

1 : a handgun whose chamber is integral with the barrel; broadly : handgun

The chambers of a revolver typically are not integral with its barrel.

As the above section illustrates, a pistol is a handgun, but many handguns are not pistols.  Government statistics for handgun homicides will include data for revolvers, which will balloon the numbers far above the number for which pistols are responsible.

PolitiFact’s metric for determining Jackson’s error is way off.

Unfortunately, it’s hard to pin down the number of homicides committed using pistols.  Not every law enforcement agency provides data with that much detail.  We can get a general idea of the accuracy using the work Marianne W. Zawitz, a statistician for the Bureau of Justice Statistics.

Zawitz found a smattering of data specific to pistols.

Zawitz also found some relevant data for the state of Virginia:

Firearms were identified as the murder weapon in 600 cases (from 1989 through 1991).  Over 70% of the firearms used were handguns. Of those handguns where the caliber and firing action could be identified, 19% were a .38 caliber revolver, 10% were .22 caliber revolvers, and 9% were 9 millimeter semiautomatic pistols. 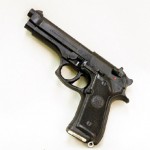 And in Honolulu from 1988 to 1992, 16 of 48 handgun homicides involved weapon calibers typically indicative of a pistol.

Information like this helps show that Jackson was probably wrong about the number of pistols involved in homicide.  But it’s short of a satisfactory fact check.

How about a correction from PolitiFact Georgia?

On Feb. 21 we contacted PolitiFact writer Eric Sturgis about the error confusing pistols with handguns.  We described the distinction between a pistol and a revolver, providing a link to a Department of Justice website confirming the information. 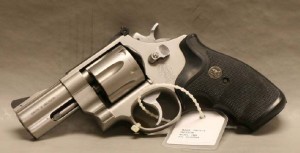 Sturgis replied that he liked the definition provided by Webster’s:  “I like the Webster’s definition of a pistol: a handgun whose chamber is integral with the barrel.”

We replied on Feb. 22, explaining to Sturgis that the definition at Webster’s affirms the distinction between a revolver and a pistol.

We have yet to receive a subsequent reply from Sturgis, and the PolitiFact Georgia item continues to contain the confusion between “pistol” and “handgun.”  PolitiFact Georgia’s story does contain one notably wise statement, however:

It’s poor fact checking, and the resistance to correction creates an additional concern.

The number of people killed with handguns is the wrong measure for the number of people killed with pistols.  “Pistols” may be used broadly as a synonym for “handguns,” but in the fact checking context one needs a strong justification for using an understanding that runs contrary to the principle of charitable interpretation.  PolitiFact’s error likely doubles the degree of the error it pins on Jackson.

Update Jan 24, 2013:  Added representative images of a pistol and a revolver.