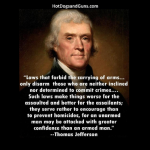 Quote Check Attributed to Thomas Jefferson: “Laws that forbid the carrying of arms … only disarm those who are neither inclined nor determined to commit crimes … Such laws make things worse for the assaulted and better for the assailants; they are serve rather to encourage than to prevent homicides, for an unarmed man may be attacked with greater confidence…
Read more

Atwitter about the framers and guns 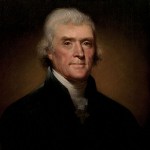 Attributed to Thomas Jefferson on Twitter:  “Those who hammer their guns into plows will plow for those who do not.” Attributed to Benjamin Franklin on Twitter:  “Never trust a government that doesn’t trust its own citizens with guns.” A massacre at a Connecticut elementary school last week has led to a great deal of news about gun control proposals along…
Read more