—The Democratic National Committee on its “Your Republican Uncle” website, Nov. 25, 2013

In late 2013, the Democratic National Committee created a website it says gives Democrats answers to Republican myths.  We continue our fact check series of that website with the DNC’s claim that it is a myth that Obamacare hurts businesses.

The DNC offers the following in support of its claim:

The DNC offers a URL underneath its supporting statement. The link leads to a White House webpage dedicated to the health reform issue and carrying the title 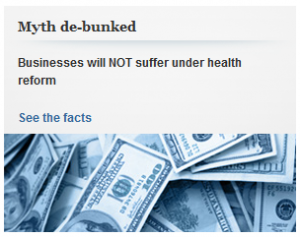 “Get the Facts Straight on Health Reform.” The text on that page does not offer support for the DNC’s claim, but it has a set of linked stories dealing with a number of health care subjects. We found the relevant one on the right (see image to right).

Clicking on the “See the facts” hotlink opens a small window in the middle of the page, explaining why the White House says it’s a myth that businesses will suffer under the ACA.

The White House gave the lie to this talking point on Feb. 10, 2014 when it singled out employers with 50 to 99 employees for a temporary exemption from the requirement to offer health insurance.  For larger employers, the administration relaxed the requirement to provide coverage to 95 percent of employees, dropping it to 70 percent.

If the ACA only helps businesses, then why is the administration treating  employers so harshly?  Why delay their ability to enjoy the benefits of the ACA?

Here’s what the left-leaning Urban Institute said in 2012 about the ACA’s costs to employers:

In fact, the ACA’s requirements have a negligible impact on total employer-sponsored coverage and its costs. The law leaves large businesses’ costs per person insured largely untouched and reduces them for small businesses. Only among mid-size businesses (with 101-1000 employees) would costs per person be noticeably higher, largely attributable to those employers not offering coverage today.

The ACA helps businesses large and small save money, period?

We found a CBO report saying the ACA would bring down the cost of premiums in the small group market by as much as 4 percent (bold emphasis added):

CBO and JCT estimate that the elements of the legislation that would change the price of providing a given amount of coverage for a given population would, on net, reduce the average premium per person for nongroup coverage in 2016 by about 7 percent to 10 percent relative to the amount under current law. Those elements of the legislation would reduce the average premium per person in the small group market by about 1 percent to 4 percent and would not have a measurable impact on premiums in the large group market.

It’s important to note the CBO focused on a narrow set of features in the health care reform law.  The predicted change in premiums is not the CBO’s prediction of the overall effect of the ACA on premiums.  If a business saves 4 percent per covered employee on premiums but is legally mandated to increase the number of covered employess by 10 percent then the business is paying out more money because of the health care reform law.

“large businesses will save up to 3 percent.”

In the small group market, which is defined in this analysis as consisting of employers with 50 or fewer workers, CBO and JCT estimate that the change in the average premium per person resulting from the legislation could range from an increase of 1 percent to a reduction of 2 percent in 2016 (relative to current law). In the large group market, which is defined here as consisting of employers with more than 50 workers, the legislation would yield an average premium per person that is zero to 3 percent lower in 2016 (relative to current law).

The DNC and the White House cherry-picked the data.  The decrease in average premium of up to 4 percent for the small employer sounds good.  The CBO gets that figure by keeping the level of insurance constant.  But on the CBO’s chart, the change in premium for large employers for the same level of insurance is listed as “negligible.”  That doesn’t sound so good.  So for large employers the White House picked a figure that measured a different change in average premiums (see excerpt from CBO chart below right).

The descriptions from the DNC and the White House lead the audience to believe that the 3 percent and 4 percent decreases in average premium are the same measure.  That’s deceptive, and it’s difficult to see how the White House could misuse the figures that way without realizing it.

The main problem, of course, stems from the fact we mentioned above:  A lower average premium doesn’t necessarily help a business avoid harm to its bottom line if the law forces the business to provide coverage to more employees.  The ACA does that.  That’s the function of the employer mandate.  Employers with 50 or more employees suffer penalties if they don’t provide coverage to enough employees.

Before the administration’s most recent delay of the employer mandate, affected employers would have had to provide insurance for 95 percent of full-time employees.  The latest rules move that percentage down to 70 percent.

“In fact, the Congressional Budget Office says that businesses could save up to $2,000 per person in health care costs”

Saving $100-$200 per policy annually doesn’t add up to $2,000 in annual savings per employee.  We don’t think the CBO report makes any claim about employers saving $2,000.  We think the DNC was misled by its source when the White House website said “estimates indicate that reform could save businesses $2,000 per person in health costs.”  The White House doesn’t say where the estimates came from, though it was natural to think the CBO was the source.

The DNC’s claim about Obamacare’s harm to businesses is a layered distortion.  The DNC gave a distorted translation of the White House’s already distorted claims.

The DNC provides no evidence that the ACA, on net, saves businesses money.  The left-leaning Urban Institute says medium-sized employers will pay substantially more per person under the new law.

It’s true that the CBO projected up to 4 percent savings on premiums by one measure, but that savings tells only part of the story.  The ACA has other features that place burdens on small businesses.  In particular, it does not follow that because small businesses save 4 percent per covered employee therefore the ACA does not harm small businesses.

“large businesses will save up to 3 percent.”

Again the DNC makes a true statement that misleads.  The large business factoid communicates the same one-sidedness fallacy described above.  We also charge the DNC with a fallacy of ambiguity, since the phrasing creates the impression that the 4 percent figure for small business uses the same measure as the 3 percent figure for large businesses.  We explained above why that isn’t true.  The DNC is using figures cherry-picked by the White House.

“In fact, the Congressional Budget Office says that businesses could save up to $2,000 per person in health care costs”

We’re not assigning a truth value to this claim from the DNC.  There’s a slim chance the CBO said businesses could save up to $2,000 per person in health costs, but we just couldn’t find it.  But we’re pretty confident the CBO made no such claim.  With no clear trail available to the original source of the claim, we’re left with a fallacy of the contested premise.  We’ve been given insufficient reason to accept the claim as true.

Will businesses save $2,000 per person in health costs even if the CBO didn’t claim it?  It’s possible.  But it probably represents an out-of-the-mainstream view given what the Urban Institute published, and the administration’s delay of the employer mandate adds to a strong argument that implementing the ACA hurts businesses.

We found a couple of sources, included in our reference list, that suggest possible origins for the $2,000 savings businesses will supposedly enjoy from the ACA.

Correction March 7, 2014: In our original summary we wrote “There’s a slim chance the DNC said businesses could save up to $2,000 per person in health costs, but we just couldn’t find it.”  We meant the CBO, not the DNC.  Fortunately, we think the meaning was clear enough from the context, but in any case it’s now fixed to match our original intent.