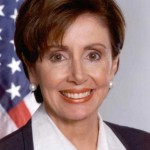 “The Affordable Care Act is bringing the cost of health care in our country down in both the public and private sector. And that is what is largely responsible for the deficit coming down.”

A logic deficit undermines Pelosi’s claim about the budget deficit.

House Democratic Leader Nancy Pelosi appeared on the MSNBC show “All In” with host Chris Hayes on May 13, 2013.  During the interview, Hayes suggested the “tea party” wing of the Republican party had successfully achieved its goal of government austerity with a decreasing budget deficit.

Pelosi’s response credits the Affordable Care Act with a central role in reducing the budget deficit:

CHRIS HAYES
The thing the tea party wave of mid-term elections brought to power and the thing they were focused on was imposing austerity, right? Bringing the budget deficit down, that’s the thing they keep talking about.

CHRIS HAYES
And they have—it strikes me they have been remarkably successful in doing that.

CHRIS HAYES
When you look at the debt ceiling debacle that led to the Budget Control Act which has now led to the sequester, that actually they—

NANCY PELOSI
Oh, please, thank you for this question.  This is so far off the—

NANCY PELOSI
So far off the course. First of all, the actions taken by President Obama and the House—Democratic Congress House and Senate, uh, when he became president was the, the American Recovery and Reinvestment Act. Many of the initiatives that he passed are what are coming to bear now. Including the Affordable Care Act. The Affordable Care Act is bringing the cost of, of health care in our country down, in both the public and private sector, and that is what is largely responsible for the deficit coming down.

The Congressional Budget Office reports a substantial decrease in the budget deficit for 2013:

If the current laws that govern federal taxes and spending do not change, the budget deficit will shrink this year to $845 billion, or 5.3 percent of gross domestic product (GDP), its smallest size since 2008. 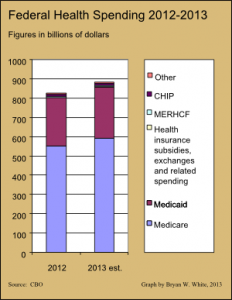 The CBO does not credit the ACA with decreasing health care spending.  Instead, it lists the expansion of subsidies for the purchase of health insurance as one of the factors expected to contribute to rising federal health care costs over the next 10 years.

Simply put, if health care spending does not literally decrease as a result of the ACA, the ACA cannot directly contribute to a reduction in the federal deficit.

Mainstream media fact checker PolitiFact examined Pelosi’s claim that the ACA reduced health care spending, finding it “Half True.”   PolitiFact accepted the explanation from Pelosi’s office that she meant to say the ACA had slowed the increase in health care spending.  We’re inclined to reject that explanation based on its failure to respect the context of the interview.  Hayes put Pelosi on the topic of a decreased budget deficit, not slower deficit growth.

“The Affordable Care Act is bringing the cost of health care in our country down in both the public and private sector.”

We don’t see how reduced health care costs in the private sector could significantly cut the budget deficit, so we’re ignoring that part of Pelosi’s claim.  Health care spending has not gone down significantly in any of the categories tracked in the federal budget (see graph above).  If health care spending has not decreased as a part of the federal budget then the ACA is a minor factor at best in the smaller budget deficit noted by MSNBC host Hayes.

As for the claim from Pelosi’s office that the House Democratic Leader was talking about slowing the growth of health care spending, that avenue encourages the conclusion that Pelosi was deliberately misleading the audience.  With that explanation her answer completely fails to address Hayes’ point.  We would not consider this a charitable interpretation if it wasn’t offered by Pelosi’s office.  We consider it more likely that Pelosi wanted the audience to believe that the ACA literally lowered federal health care costs in a way that helps explain the smaller budget deficit in 2013.

“And that is what is largely responsible for the deficit coming down.”

Given the rise in health care costs along with the decrease in the 2013 federal budget deficit, Pelosi is suggesting a mathematical impossibility.  The CBO projects growing federal deficits after 2015.

In the Hayes/Pelosi transcript we used “because” instead of “became” where Pelosi said “when he became president.”  Our apologies for the error.