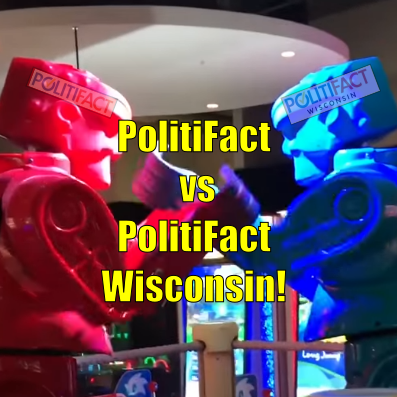 The Facebook post was from PolitiFact Wisconsin, linking a Feb. 28, 2020, fact check of a claim from Rep. Mark Pocan (D-Wisc.). As pointed out in a post at PolitiFactBias.com by this author, the Pocan fact check claims real wages have increased while failing to keep pace with inflation.

PolitiFact Wisconsin put it this way:

A quick comparison shows that wages today are slightly higher than what they were then, once inflation is factored in.

But the cost of everyday goods like rent, groceries and cars have outpaced that median wage growth, meaning a worker’s 1990 weekly paycheck, at a $10.43-an-hour rate, would have held more spending power than the $23.33-an-hour rate does today.

Anybody who knows what “real wages” are (wages “once inflation is factored in”) knows that’s baloney.

As a matter of fact, PolitiFact National emphasized the point multiple times in 2019. PolitiFact found real wages on the increase in response to the Democratic Party response to the President Trump’s State of the Union speech in 2019. It made the same finding in giving Sen. Kamala Harris (D-Calif.) a “Mostly False” rating on Jan. 27, 2019.

PolitiFact’s readers had so much trouble accepting the news that the fact checkers offered up an explainer article on Feb. 7, 2019. That article stated:

We decided to ask a cross-section of economists whether our readers had a point. Are the inflation measurements we relied on in our fact-checks incapable of capturing changes in the cost of living, as many readers said?

We found broad consensus that while the federal measurements aren’t perfect, they’re a good yardstick for calculating overall changes to the cost of living.

Nothing changed in a year’s time to resolve the difference in reporting. PolitiFact Wisconsin reported falsely.

Why Not Fix the Mistake?

We reported the error (along with other mistakes) to PolitiFact back on March 3, 2020.

PolitiFact Wisconsin has taken no apparent action to correct the error. To be fair, we do not know that PolitiFact informed PolitiFact Wisconsin of any problem (perhaps a tweet can end up shedding light on that). Nor does its system acknowledge the receipt of correction requests. Maybe the complaints all go to a spam folder. Who knows, outside of PolitiFact?

Perhaps a formal complaint to the International Fact-Checking Network might help?

We tried sending a formal complaint about the problem using the IFCN website interface. But three attempts to send the complaint that way ended up returning an error: “Whoops, looks like something went wrong.”

After that, we sent the complaint to the IFCN via email (March 10, 2020). But we received no confirmation it reached the IFCN. The IFCN has yet to announce or implement a policy to allow the public to track the number, type and source of complaints it receives about verified signatories to its statement of principles.

It appears we may get to count this as another example supporting our charge that the IFCN offers a poor system of accountability for fact-checking organizations.