“At Hobby Lobby alone, the care of thousands of women in 42 states is at risk. And if the courts side with them, that means millions of women face losing basic health coverage.”

The Hobby Lobby is a national retail business specializing in crafts and home decor.  The business drew national attention for bringing a court challenge against the government’s policy on the Patient Protection and Affordable Care Act, also known as the ACA or Obamacare.

Hobby Lobby contended that the requirement to provide some types of FDA-approved contraception forced the company’s religious owners to choose between subsidizing contraceptive methods that conflict with their pro-life convictions and paying a fine for dropping insurance coverage.

The company’s existing insurance coverage before the new regulations helped pay for contraception.  Just not the types of contraception to which the owners morally object:

The Green family has said it has no moral objection to the use of other contraceptives and will continue covering them for its employees.

EMILY’s List sent out an email with the subject line “Who decides your healthcare?” (bold emphasis in the original):

Right now, 11 Republican lawmakers have tacked their names on to a legal brief in support of Hobby Lobby, a major retailer currently suing the Obama Administration. What’s this all about? Hobby Lobby wants to deny its women employees insurance coverage for birth control.

It’s clear that congressional Republicans haven’t stopped their assault on women’s rights — even after a walloping at the ballot box from women voters, where we showed just how much we care about making our own healthcare decisions. Now they’re taking it to the courts and it’s time for us to stand up and fight, or else we could live in a world where our bosses get to make our healthcare decisions.

A few lines later we get to another passage of interest (bold emphasis in the original):

At Hobby Lobby alone, the care of thousands of women in 42 states is at risk. And if the courts side with them, that means millions of women face losing basic health coverage. It’s too dangerous for us to sit by and not make our voices heard loud and clear.

Hobby Lobby has stores in over 40 states and over 10,000 employees.

What’s the Hobby Lobby lawsuit about?

Schriock makes no mention of the stated legal basis for the suit.

Schriock’s omissions encourage readers to commit a fallacy of ambiguity, exaggerating the extent of the loss of insurance coverage.

Schriock tells her readers a win in court by Hobby Lobby could result in employers making healthcare decisions for women. 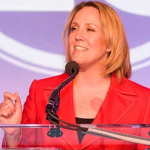 It’s unlikely most people think of birth control as “basic healthcare coverage.”  Plainly Schriock’s context is birth control coverage, though.  So what is she talking about?

The health care reform law permitted the federal Department of Health and Human Services to define health insurance benefit levels in a number of ways.  In August 2011 the HHS made all forms of FDA-approved birth control part of a package of preventive care benefits automatically exempt from co-pays.  With the effective date of that rule, contraceptive coverage turned into “basic health care.”  Schriock omits the story behind the term she uses.

“We could live in a world where our bosses get to make our healthcare decisions.”

Women would lose “basic” coverage not considered “basic” until HHS declared it so in 2011.  Schriock exaggerates the extent of the loss by omissions of context, encouraging a fallacy of ambiguity.