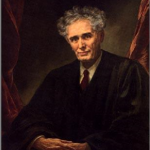 We ran across a quotation attributed to noted Supreme Court justice Louis D. Brandeis.  Curious about the context more than suspicious of its authenticity, we tried to find the source.  The quotation ended up having a number of variants.

“We may have a democracy or we may have great wealth concentrated in the hands of a few, but we cannot have both.”

“We can have a democratic society or we can have great concentrated wealth in the hands of a few. We cannot have both.”

“We can have democracy, or we can have the concentration of wealth in the hands of a few. We cannot have both.”

“We can have democracy in this country or we can have great wealth concentrated in the hands of a few, but we cannot have both.”

“We can have concentrated wealth in the hands of a few or we can have democracy. But we cannot have both.”

“We can either have democracy in this country or we can have great wealth concentrated in the hands of a few, but we cannot have both.”

A legitimate quotation can end up with a whole bunch of corrupt versions on the Web.  But in this case the trend was distressing because it took little time to run across a solid handful of variants, sometimes with more than one coming from the same person.

Our searches turned up the typical pattern of a spurious quotation:  no context, and typically no source listed.  But we found a few exceptions.

A few of the authors using variants of the quotation sourced it to others who had used it without identifying the source.  That despite the fact we were searching books and journals where going to primary sources is usually expected.

Eventually we collected a pair of leads.

We first located a reference to “Goldman, 1953, p. xi.”  Sure enough, we discovered the existence of a book, “The Words of Justice Brandeis” by Solomon Goldman, published in 1953.  But the book did not contain any recognizable variant of the quotation, and page xi was a portion of the book’s Table of Contents.

The other reference pointed to The Morrow Book of Quotations in American History.  Questia.com tempted us with a free trial which would have provided access, but we didn’t care for the attached strings.

The local library had a copy.

We found the book in the stacks and found the following version of the quotation within:

We can have democracy in this country or we can have great wealth concentrated in the hands of a few, but we cannot have both.

The attempt to find that source stumped two reference librarians for the better part of an hour.  We had time to puzzle over the date of the source occurring after Brandeis’ death earlier that same year.

Campbell told us he started researching the quotation back in 2000 after receiving inquiries about it.  Presidential candidate Ralph Nader was using it in his speeches.

“The quote does not appear in anything that he wrote: not in court opinions, letters, speeches, articles, books etc.,” Campbell said.

So where did it come from?

“The only times the quote appeared in his lifetime were in editorials in the newspaper Labor, the earliest (that I can find) being in Dec. 19, 1933,” Campbell said. “Each time, the wording was a little different. On Oct. 14, 1941, shortly after Brandeis’ death, Labor ran a tribute to Brandeis in which the qu[o]te was used again, this time in the form that everyone uses now.”

Brandeis probably said it, then.  Or at least something pretty close.  But there’s no known primary source.  So how should one cite the quotation?

Campbell recommends using “attributed to Brandeis” and referencing the quotation to the book “Mr. Justice Brandeis, Great American,” published in 1941.

What was the context?

The lack of a known primary source thwarts for now the attempt to consider the context of the quotation.  Still, the search for the source brought us in contact with a number of statements from Brandeis that mean more or less the same thing.

One example comes from Brandeis’ book “Other People’s Money and How the Bankers Use It”:

If the bankers’ power were commensurate only with their wealth, they would have relatively little influence on American business. Vast fortunes like those of the Astors are no doubt regrettable. They are inconsistent with democracy.

Use Scott Campbell’s recommendations when citing the quotation.

Peter Scott Campbell has his account of the search for the Brandeis quotation and his hypothesis regarding its origin published in the Spring 2013 volume of the law journal The Green Bag.

We enthusiastically recommend the article to interested readers, and offer our thanks to Campbell for his indispensable help with our fact check.