“One recent report on the gender pay gap in the Valley found that a woman with a bachelor’s degree here tends to make 60 percent less than a man with the same degree.”

Former Secretary of State and likely presidential candidate Hillary Clinton gave a speech to a women’s conference in Santa Clara, California on Feb. 24, 2015. In her speech, she emphasized a gender pay gap specific to Silicon Valley (bold emphasis added):

On the Forbes list of the top 100 venture investors in tech, only four are women. Just 11 percent of executives in Silicon Valley, and only about 20 percent of software developers overall are women.

One recent report on the gender pay gap in the Valley found that a woman with a bachelor’s degree here tends to make 60 percent less than a man with the same degree.

And we can literally count on one hand the number of women who have actually been able to come here and turn their dream into billion dollar businesses.

We’ll look at what Clinton meant and whether the figure she used was right.

Though Democrats often use the “gender pay gap” to refer to a gap caused by gender discrimination, we find little evidence Clinton does so in this case. The context shows Clinton refers primarily to the way career decisions leave women with bachelor’s degrees working at lower paying professions than men. In Silicon Valley the concentration of male-dominated technology jobs accentuates the raw gender pay gap. Most of the raw gap stems from choices of career and parenting, with women tending to choose lower-paying careers or leave the work force to focus on parenting.

Though later in her speech Clinton appears to suggest insulating women from the career-damaging effects to taking maternity leave, we’ll keep our focus on the raw wage gap Clinton references.

The report Clinton cited was produced by Joint Venture, a public-private partnership, and looked at Silicon Valley’s economy. The section examining the gender wage gap was short (bold emphasis added):

It makes a difference to the math which gender we’re comparing with the other. 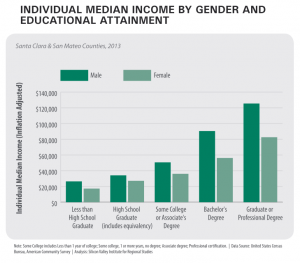 Clinton, then, exaggerated the percentage of the gap she mentioned by about 58 percent. It’s also clear that her speech focused on the largest disparity in the gender wage gap data.

“One recent report on the gender pay gap in the Valley found that a woman with a bachelor’s degree here tends to make 60 percent less than a man with the same degree.”

News outlets reporting on Clinton’s speech appeared not to note any fault with her numbers. Examples include the Huffington Post, Breitbart.com, and the Chronicle.