—The Democratic National Committee, December 2014 on its “Your Republican Uncle” website

The Democratic National Committee bills its “Your Republican Uncle” website as a place that provides the perfect answer for myths spread by Democrats’ Republican relatives. In December 2014, the DNC added a new supposed myth to its section on climate change, saying it’s a myth that President Barack Obama wants the United States, by itself, to stop climate change.

The DNC offers evidence intended to support its claim that Obama does not plan for the United States to stop climate change single-handed:

This summer President Obama announced a plan to reduce U.S. carbon pollution 25% from 2005 levels by 2020. But he also knows that climate change can only be solved if the international community works together. That’s why this November, the President announced a groundbreaking agreement to work with China to reduce carbon pollution and to increase the country’s non-fossil fuel energy to around 20% by 2030.

We’ll look for the identity of those spreading the would-be myth and assess the expected impact of the China deal on carbon pollution.

Spreaders of the Myth

How on earth did Republican uncles get the idea that Obama wants the United States to go it alone in ending climate change? Who spread that idea around?

We couldn’t find anyone responsible. The idea that the United States can’t stop climate change alone comes up pretty often. And Republicans have criticized arrangements they say would put the U.S. economy at a disadvantage compared to other nations. But we failed to find any Republican or conservative claiming Obama wants the United States alone to stop climate change.

If it’s true no Republican or conservative made that claim, then the DNC is using its Your Republican Uncle site to create a straw man argument. The straw man fallacy consists of changing an opponent’s argument to make it easier to attack.

The Deal with China 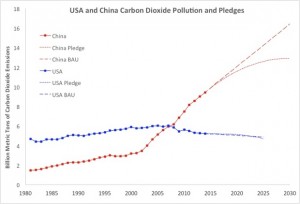 The DNC uses the November 2014 agreement Obama struck with China as an example of reducing carbon emissions. Under the deal, the United States reduces its carbon emissions 25 percent from 2005 levels by 2025. China, for its part, must cap its carbon emissions by 2030 and increase to 20 percent the share of its energy generated by means other than fossil fuels such as coal.

The deal with China, assuming both sides meet its terms, does not produce a net decrease in carbon emissions. Instead, it reduces carbon emissions from the levels expected in the absence of the agreement. The accompanying graph from the Guardian helps make that clear.

Yes it’s a myth, but it’s not likely anyone, including Republican uncles, is spreading it.

“(T)he President announced a groundbreaking agreement to work with China to reduce carbon pollution and to increase the country’s non-fossil fuel energy to around 20% by 2030.”