Can the U.S. address climate change and compete economically?

—The Democratic National Committee, Nov. 27 from its “Your Republican Uncle” website

Cutting carbon emissions carries a cost, and the cost tends to make the United States less competitive.  The DNC’s rosy picture of the benefits of climate change mitigation ignores many complications.

The DNC says its a myth that the United States can’t stay competitive economically while addressing climate change. The DNC offers the following explanation for its claim:

Climate change itself is taking a toll on our economy. In 2012, climate and weather disasters cost the United States more than $100 billion. And right now, other countries are making huge investments in research and development to confront this crisis with new technologies — which means new industries and new jobs. We can’t afford to fall behind them. The longer Republicans deny climate change exists, the further we fall behind.

The DNC offers a single citation in support of the above paragraph, a hyperlink leading to a White House infographic carrying the title “Climate Change and President Obama’s Action Plan.”

It’s hard to gauge the truth of the DNC’s central claim. What does it mean to compete economically? Every runner in a track competition competes, but if one runner outclasses the rest we might say the rest of the field couldn’t compete with the winner.

To help narrow the meaning, we looked for Republican claims resembling the one the DNC calls a myth. We found a few.

Are the Republicans right? Would addressing climate change make it harder for the United States to compete economically?

Republicans have a plausible case that measures intended to mitigate climate change cause economic hardship. We should note that such proposals differ from one another. One likely effect, however, would see higher prices for energy.

The Heritage Foundation, a conservative think-tank, put forth the case for opposing the Kyoto Protocol (footnote numbers removed):

A recent study notes that many climate policy experts now believe the emissions reductions called for in the Protocol could have an adverse effect on Americans. The study finds, for example, that U.S. productivity following implementation of the Protocol would fall by $100 billion to over $400 billion in 2010. An unrestricted global emissions trading system that includes developing countries could reduce this damage to between $100 billion and $200 billion. Even if developed countries could buy credits from developing countries, they would still pay dearly to attract them at a time when developing nations are focused on economic growth.

The World Wildlife Foundation sponsored a study saying the U.S. economy would benefit from the Kyoto Protocol and energy prices would drop:

This portfolio of policies and measures would allow the United States to meet its obligations under the Kyoto Protocol. Together when combined with steps to reduce the emissions of non-CO2 greenhouse gases and land-based CO2 emissions, and the acquisition of a limited amount of allowances internationally. This package would bring overall economic benefits to the US, since lower fuel and electricity bills would more than pay the costs of technology innovation and program implementation. In 2010, the annual savings would exceed costs by $50 billion, and by 2020 by approximately $135 billion.

Heritage Foundation points out that the United States senate unanimously rejected the Kyoto Protocol, helping show Democrats and Republicans at the time believed the agreement would hurt the economy.  We note that both studies stress the importance of low energy prices to economic productivity.  Could an energy breakthrough allow a green economy to quickly undercut energy prices from fossil fuel sources? It’s possible. But it’s hard to count on future technological breakthroughs.  We’ll leave unsettled whether the green economy will represent a net advance over the fossil fuel economy in the near future. We think Heritage Foundation makes the more convincing case. 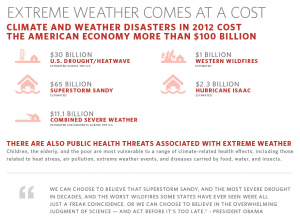 The cost of climate and weather disasters

The reader will notice the DNC stops short of claiming the weather disasters occurred as a result of climate change. But the DNC implies the cause-and-effect relationship.

There is no scientific consensus that human-caused climate change is responsible for “Superstorm Sandy” or the effects of drought in 2012.

At most, climate change from greenhouse gas emissions caused a minor part of the $100 billion cost from 2012. Using the $100 billion figure without providing that explanation misleads the audience.

The DNC warns of other nations investing heavily in technologies intended to address climate change, and the United States can’t afford to fall behind. But of course that depends entirely on the return on investment. The New York Times reports on Europe’s disappointment with its return on investment:

Bloomberg reports investments in renewal energy fell worldwide. The report cites one expert who said part of the drop was explained by the decreased cost of solar panels.

It’s more opinion than fact that the United States can’t afford to fall behind other countries in developing renewable low-carbon energy sources. The increased use of natural gas for generation of electricity, for example, helped the United States meet Kyoto Protocol goals for cutting carbon emissions. The lower cost of gas energy offers a path toward higher investment in research leading to the next generation low-cost energy source. And, of course, spending money on research does not inevitably lead to the desired technological advances.

The DNC takes a jab at Republicans by claiming “The longer Republicans deny climate change exists, the further we fall behind.”

We failed to find prominent Republicans circulating this would-be myth. We did find some saying climate-change legislation would harm the economy. If all nations address climate change using similar measures then we’d expect the United States to remain economically competitive. So in that sense the DNC accurately calls the idea a myth. That’s not what Republicans have in mind when they say such legislation will hurt the economy, however. That makes the DNC’s argument a straw man fallacy.

“In 2012, climate and weather disasters cost the United States more than $100 billion.”

“We can’t afford to fall behind them.”

The DNC offers no reliable means of measuring when one nation is ahead of another in developing renewable energy technologies. Technology advances unpredictably, so we see no means of treating this claim as a verifiable fact.