“45,007,000 seniors would be forced out of traditional Medicare and into a voucher program.”

The statement drawing our focus occurs right off the bat in the Democratic Policy & Communication Center’s official evaluation of the newest version of the Ryan budget plan (italics in the original, bold emphasis added):

The Republican budget would end Medicare as we know it by moving seniors from guaranteed benefits to a voucher program that sticks them with higher health care costs.

45,007,000 seniors would be forced out of traditional Medicare and into a voucher program. Under the Republican plan to end Medicare as we know it, seniors will receive a voucher instead of guaranteed benefits under traditional Medicare beginning in 2024. For the 45,007,000 Americans aged 45-54 at the time of the most recent Census, the value of their vouchers would be capped at growth levels that are lower than the projected increases in health care costs.

The new Ryan budget, as with past versions, replaces Medicare’s traditional single-payer system for those currently under age 55 with a regulated competitive market system.  That system parallels the private insurance exchanges that serve as a key part of the Affordable Care Act that President Obama advocated and signed into law.  Rather than a voucher as the term is normally understood, the patient chooses one of the available plans and the federal government pays a portion of the premium directly to the insurance company on a means-tested basis.  CNNMoney describes how the subsidy works:

The subsidy would cover the cost of the second-least-expensive private plan or the Medicare option, whichever is less,in the first year. So if seniors select pricier coverage, they would have to pay the difference in cost. And they would receive a rebate if they selected a cheaper plan.

After that, the subsidy increase would be based on a competitive bidding process, but the per capita hike would be no more than nominal GDP growth plus 0.5%. That currently works out to about 4.5 percent based on figures for 2012.

The Ryan plan continues to use the same cap on increased Medicare spending that the ACA uses:

The Ryan plan eventually applies that cap to the insurance subsidies instead of to gross Medicare spending, though Congress would need to find ways to stay under the cap pending full implementation of the premium support system. 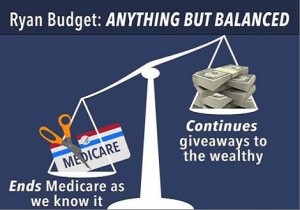 How do we count the ways this DPCC publication misleads?

It helps to keep our focus narrow, but even then the varieties of deception present a challenge.

Are over 45 million seniors “forced out” of “Medicare as we know it” by the new Ryan budget?  The DPCC explains that it draws its number of future beneficiaries from census data counting the number of Americans aged 45-54 at the time of the last census.  That demographic isn’t eligible for traditional “Medicare as we know it” and under the Ryan plan would never possess eligibility for the old program.

How can one force a senior out of a program to which that senior never belonged in the first place?

At Zebra Fact Check we will generally cut generous breaks for normal methods of approximation.  The DPCC’s number presents insurmountable challenges to our generosity.

By using the number “7” as a significant digit in the thousands place, the DPCC suggests a number representing the nearest thousand.  But the number of persons in the 45-54 age demographic will surely change by at least 7,000 by the time the very first member of the group achieves eligibility for Ryan’s proposed insurance premium subsidies.  Under the unrealistic assumption that under 1,000 of the 45-54 demographic will die before eligibility for Ryan’s new Medicare system, 14,007,000 is the maximum number affected by the new plan.  The DPCC might have hedged its bets by saying “up to 14,007,000.”  Apparently those responsible felt no need for that.  That’s too bad, because squeezing in the extra 7,000 does little to swell a rounded claim of “14 million” at the cost of creating a misleading and inappropriate illusion of accuracy.

The Census numbers include non-citizens.  For the year 2000, non-citizens made up about 7 percent of the total U.S. population.  Approximately 3 million of the DPCC’s 45 million would fail to qualify for Medicare unless the government takes some action that grants them eligibility.

The DPCC’s number hews absurdly toward the maximum potential range.

As we mentioned above, the Ryan plan is not a “voucher program” in the ordinary sense of the term.  But the distortion here is subtle.  The difference between what Ryan calls “premium support” and a voucher program as we know it is the insured as the middle man for the government contribution.  The Ryan plan cuts out the insured as the middle man.  The insured never receives a literal voucher for premium payments.  The Medicare beneficiary instead chooses an insurer, communicates that choice to the federal government and the government pays part of the required premium directly.

The DPCC’s language resists charitable interpretation.  The claim is literally false but the falsehood represents an exaggeration of a real effect of the Ryan plan:  Persons in the 45-54 age range when the plan takes effect will not have available a Medicare plan identical to today’s in terms of both costs and services.

The 45,007,000 figure is absurd in terms of its precision and the presuppositions it represents.  It is improper to count non-citizens as potential Medicare beneficiaries minus the legislation that would accomplish that end, and it is extraordinarily unlikely that the full number of persons in the 45-54 demographic will survive to reach the 65+ demographic.  Perhaps tens of millions in that demographic would eventually live under a different Medicare than the present system.

This part of the DPCC’s presentation kneads the facts to produce misleading impressions that magnify legitimate concerns about the Ryan budget.