Does the Obama tax proposal save almost $1.16 trillion?

The portion of the infographic above appears to deal only with Mr. Obama’s proposal on changes to the tax system.  His “savings” are apparently nothing more than revenues acquired from those whose taxes will increase under his plan.

The $575 billion deficit in 2018 is the smallest projected for any of the years listed.  Table S-2 in the budget says letting tax cuts expire for higher-income earners will reduce the deficit by $1.4 trillion by 2022.

“The President’s proposal will save almost $1.16 trillion over the next decade.”

The claim of savings apparently refers to a baseline that does not include extending the Bush tax cuts for income over $250,000.  The calculation apparently assumes no economic benefit from leaving the tax cuts in place.  The language misleads by isolating the tax changes from the rest of the budget.  The president could increase spending by $2.32 trillion over the next decade, guaranteeing a rising deficit and still claim that the tax increase, in isolation, decreases the deficit.  Under the 2013 budget, the budget deficit decreases from $1.3 trillion in 2011 to $704 billion in 2022 (Table S-1).

Perhaps the administration’s budget document was the source for the claims in the infographic, but we’re not seeing it.

“Making the high-income tax cuts permanent would add almost $1.16 trillion to deficits over the next 10 years.”

We think we see the administration’s justification for this claim, but it ignores the fact that spending accounts for no less than half of a budget deficit.  Add $1.16 trillion in spending and making the tax cuts permanent doesn’t lower the deficit at all under static scoring.

GDP and the budget

Fact checkers seem to agree that the size of the deficit is best measured as a percentage of the Gross Domestic Product.  The state of the GDP determines what revenues the tax system will yield and influences government spending.  For example, high unemployment over the past few years has the effect of lowering tax revenue and costing the government more in terms of unemployment benefits.

We produced two charts to help illustrate the key role of the GDP with respect to the federal budget.  The first shows revenues and outlays as a percentage of GDP along with the growth of the GDP over the past 20 years. 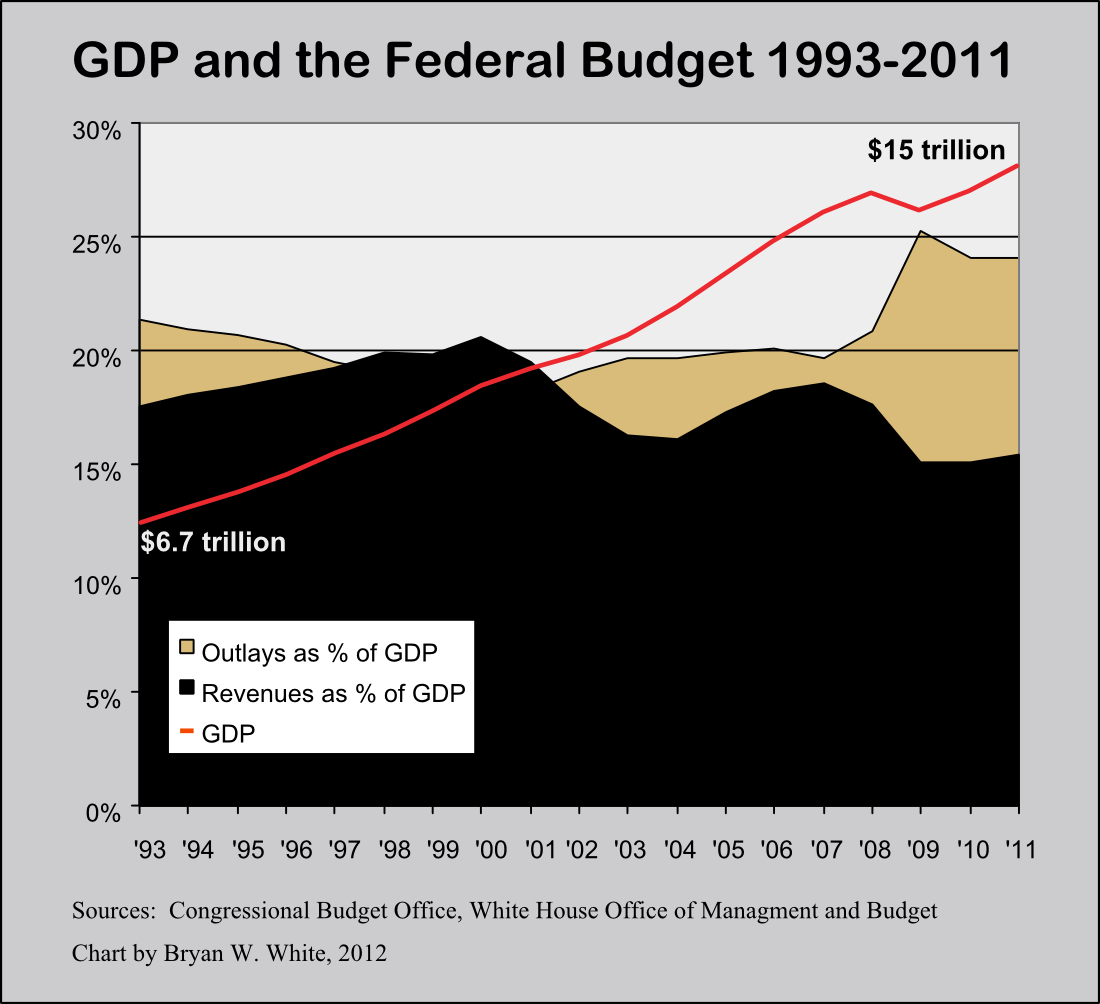 The chart makes clear the “Clinton surplus” in the left center where the black area representing revenues eclipses for a few years the tan area representing outlays.  That period coincides with some of the strongest GDP growth during the Clinton presidency, but the most notable aspect of the budget surplus was the sustained drop in outlays as a percentage of GDP.

Also note the rise in revenues during the Bush presidency preceding the recession.  Why did revenues rise so much?  The deficit was decreasing around 2006 despite the tax cuts, Medicare drug benefit and wars put on a credit card.   Did Bush raise taxes?  The answer is simple but often overlooked.  When the economy grows as it did under both Clinton and Bush, revenues increase without raising taxes.  They increase because people earn more money and fall into higher tax brackets as a result.

The recent recession produced much higher spending in reaction to the soft economy.  Bush spent a great deal on loans to financial institutions, most of which was repaid.  The stimulus package accounts for a good bit of spending as well.  But look at the way revenue drops in conjunction with the recession.  The drop occurs for two reasons.  First, people were losing jobs and sometimes changing to jobs that pay less.  Second, the stimulus bill lowered taxes.  Near the tail end of the chart, spending stays high with a very mild drop while revenues stay low with a mild rise.  We have a big gap between the two.  Yet the GDP is rising at about a 4 percent annual clip, nominally.

Where is the rise in revenue that accompanied brisk GDP growth under Clinton and Bush?  Is a tax rate increase the best way to narrow the gap?

Mr. Obama’s 2013 budget includes increased taxes on income over $250,000.  It also projects the percentage of GDP for outlays and revenues.  So we extended the chart based on those numbers. 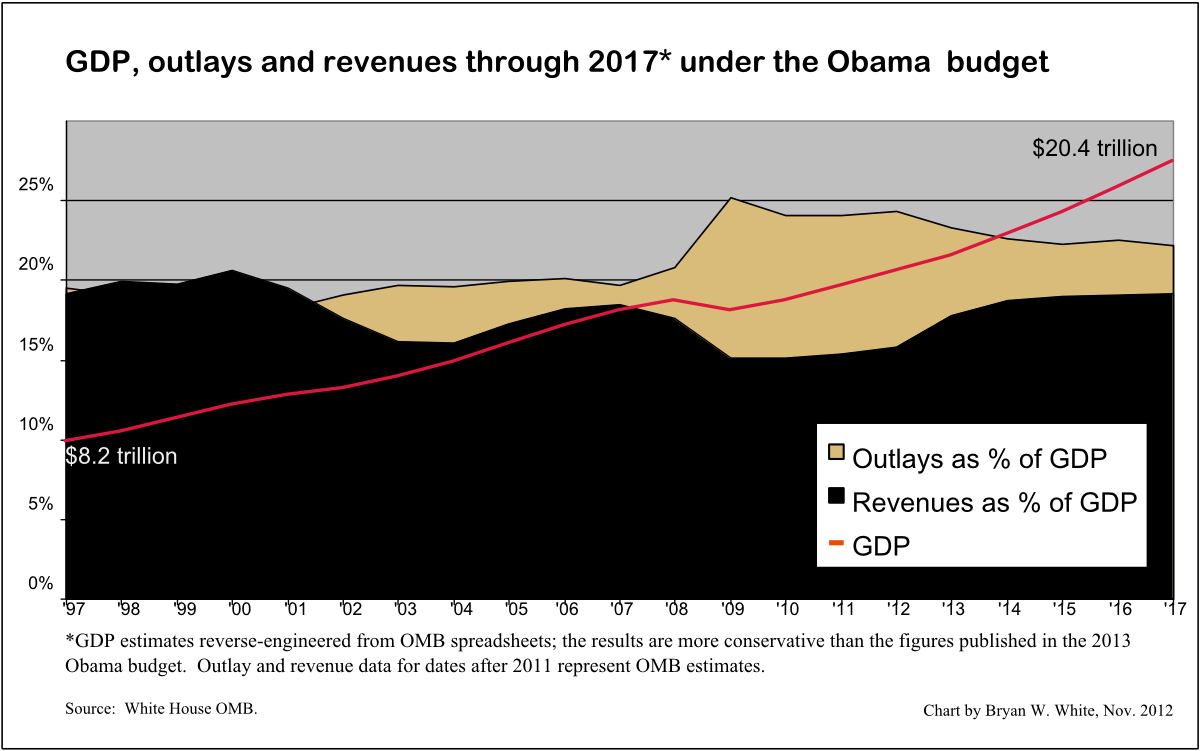 With the big picture before us, we judge that the White House infographic is trivially true, assuming the numbers are, in fact, derived legitimately from the 2013 budget document.  Raising taxes decreases the deficit from the level it would otherwise reach without the tax increase, even if the numbers are exaggerated by static scoring.  The tax increase does not significantly address the deficit problem.  Decreasing deficits under Clinton and Bush occurred in conjunction with robust GDP growth sufficient to shrink outlays as a percentage of GDP.  At the same time, revenue increased not simply because of tax increases but because the inherent progressivity of the tax system raises more revenue when incomes increase.  That’s very clearly the case under President Bush (’05-’07).

Correction 11/29/2012:  Changed “Cut” to “Add” in order to make sense of an improperly wrought sentence.  That sentence initially read “Cut $1.16 trillion in spending and making the tax cuts permanent doesn’t lower the deficit at all under static scoring.”  The original version was a false statement.  The new version makes sense.