Is it true that ‘Across the board tax rate cuts are regressive’?

The Congressional Progressive Caucus:  “Across the board tax rate cuts are regressive because a 20 percent tax cut for a millionaire – even as a share of income – amounts to a far greater benefit than a 20 percent cut for a hardworking low income American.”

On Dec. 1, 2012 the Congressional Progressive Caucus released its guiding principles for tax reform. The principles included the claim that across-the-board income tax cuts were regressive because a millionaire receives a greater benefit from the cut than a low income worker. The claim is false except for any exceptional cases where the existing system lacks progressivity in comparing a millionaire’s tax rate to that of a low income worker.

The CPC statement, in context:

It is a bedrock principle of fairness that those with higher incomes should pay progressively higher tax rates. Any tax reform must ensure that each fifth of the income distribution (as well as the top 1 percent and top 0.1 percent) should have a higher average effective tax rate than the income group below. Across the board tax rate cuts are regressive because a 20 pecent tax cut for a millionaire – even as a share of income – amounts to a far greater benefit than a 20 percent cut for a hardworking low income American.

To maintain or strengthen progressivity, we should end one of the leading contributors to after-tax income inequality in this country, the special tax breaks for investment income. Workers who get their salaries from wages often pay a higher effective tax rate than wealthy individuals like Mitt Romney and Warren Buffett who make most of their income from selling stocks and bonds or from dividends. This undermines the basic tenant [sic] that average tax rates should rise with income. In fact, the richest 1 percent of taxpayers receives 71 percent of all capital gains, while the bottom 80 percent of taxpayers receives only 10 percent of capital gains. We should treat all capital gains and qualified dividends as ordinary income, an approach President Reagan once signed into law.

Brian Roach defines “regressive” and “proportional” tax systems in a 2003 working paper for the Global Development and Environment Institute:

A regressive tax system is one where the proportion of income paid in taxes tends to decrease as one’s income increases. A proportional, or flat, tax system simply means that everyone pays the same effective tax rate regardless of income.

The IRS defines the regressive tax similarly, calling it “A tax that takes a larger percentage of income from low-income groups than from high-income groups.”

When examining whether a tax system qualifies as progressive or regressive, the total income, not the taxable income, should serve as the denominator when calculating the effective tax rate.  Exempt income is effectively taxed at a 0 percent rate.

The Tax Foundation examined the issue of effective federal income tax rates as a percentage of overall income. It found that for the tax year 2010 over 89 percent of tax filers have a lower effective tax rate than Mitt Romney’s rate of 13.9 percent.

Because all corporations are ultimately owned by people, corporate income taxes are ultimately paid by people.  Corporate income taxes are not ordinarily calculated as part of the effective tax rate for purposes of the individual income tax despite the frequently aired complaint that taxes on dividends and capital gains represent double taxation.  But the widely respected Congressional Budget Office has calculated effective tax rates including estimates for the effects of (regressive) excise taxes and (progressive) corporate taxes.  The results push the claim from the CPC further into the realm of implausibility. 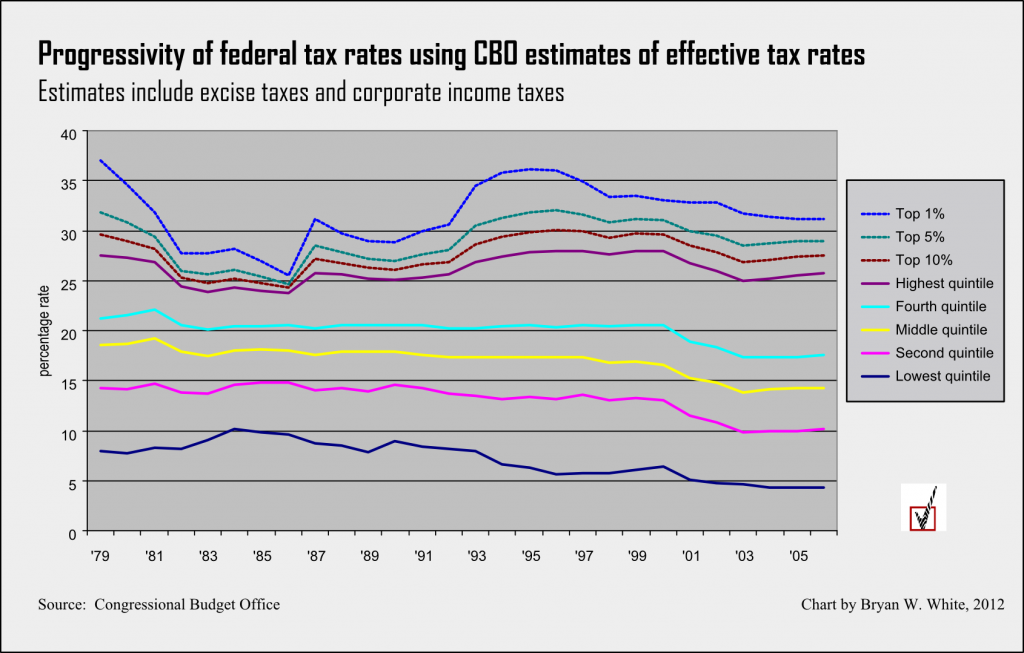 The chart makes clear the strong progressive character of the current tax system along with its recent trend toward greater progressivity among the quintiles.  The effective federal tax rates for the bottom four quintiles have decreased substantially (3 to 4 percentage points) since 1979 while that of the highest quintile has decreased mildly (by about 2 percentage points). 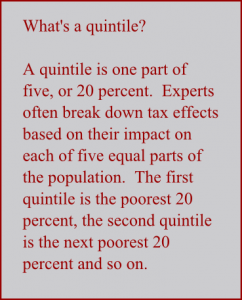 While cases may exist where a millionaire avoids paying taxes because of financial losses, it is far from the norm that a person in either of the lowest two quintiles will pay a higher effective tax rate than a millionaire.  So long as the base system is progressive, across the board tax cuts will not result in regressive tax effects.

An across the board tax rate cut does result in more tax saving for a millionaire, but those savings will be proportional to the existing tax rates.  A progressive set of tax rates will remain progressive after an across-the-board cut.  A regressive set of tax rates will remain regressive after an across the board cut.

Even if a millionaire retains much more money as a result of an across-the-board tax cut, it does not follow that the tax cut has regressive effects.  The CPC rhetoric encourages the audience to think otherwise.  Regressive tax effects are measured as a proportion of income, not in terms of raw dollars.  The CPC statement does not reflect an accurate understanding of tax effects, and thus falls into the broad category of the non sequitur (“doesn’t follow”) fallacy (see addendum below).

This item received a correction not long after publication.  Read about it here.

A reader cites the Center on Budget and Policy Priorities in claiming that across the board tax cuts are regressive and recommending that position as a charitable interpretation.

The argument operates by changing the denominator for tax changes from total income to after tax income, which in effect changes the definition of a regressive tax.  Using this definition, a proposed sales tax may go in the course of one year from regressive to progressive with respect to a millionaire depending on a radical increase in the progressivity of the income tax.  The millionaire’s after-tax income, after all, may in principle be reduced via income taxes below that of a middle-income earner.  The irony, of course, is that a highly progressive income tax could allow the lowest income earners to reap the greatest proportional benefits of an across-the-board tax cut where millionaires’ after-tax incomes are negligible.

We accept changing the definition of regressive taxation as a charitable interpretation that would make the CPC statement true if accepted.  Thus far we see little evidence in the professional literature to support the alternative definition.  The imprimatur of the Center on Budget and Policy Priorities is enough to justify granting the benefit of the doubt.