House Democrats say Social Security ‘has paid for itself without adding a single dime to our national deficit,’ now has $2.7 trillion surplus.

The rhetoric from the House Democrats paints an unrealistically rosy picture of Social Security finances.

In August 2012, the House Democrat website added a presentation on Social Security that emphasizes the Democratic Party’s role in legislating and supporting the program.  The presentation remains a prominent feature at the website.

The House Democrats’ story about Social Security contains many claims that might interest fact checkers and omits mention of significant reforms carried out in the 1980s under President Reagan.

Social Security and the deficit

This means that Social Security adds to the budget deficit for the unified budget starting in 2010.  A press release from the Trustees from April 2012 says assets in the Social Security trust fund will run out in 2033, three years earlier than it predicted in 2011. Increasing payroll taxes and/or cutting benefits could delay trust fund depletion.

Is the Social Security program healthy?

The projected combined OASI and DI Trust Fund assets increase through 2020, begin to decline in 2021, and become exhausted and unable to pay scheduled benefits  in  full  on  a  timely  basis  in  2033.  However,  the  DI  Trust  Fund becomes exhausted in 2016, so legislative action is needed as soon as possible. 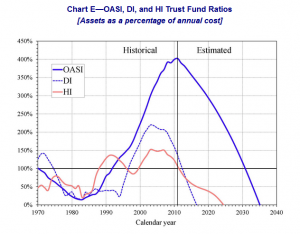 Healthy? This chart from the 2012 Trustees Report Summary tells a different story.

The 2012 Trustees’ report sends the clear message that Social Security needs to increase revenue, cut benefits or do both to maintain solvency over the next 75 years.

The system’s pay-as-you-go structure shares features with a Ponzi scheme, requiring an ever-growing base of workers as a source of funds while the older population grows over time.  We think that fiscal outlook renders the system unhealthy to any reasonable person over the long haul.  Claiming the system is healthy based on its current picture, with a rapidly shrinking annual surplus but a considerable sum in the trust fund, deceives the audience with ambiguity and missing context.

Has Social Security paid for itself without adding a single dime to the deficit?

The deficit, of course, represents a shortfall over the course of a budget year.  Though the Social Security trust funds have maintained a balance over the history of the program, a number of times over the years Social Security’s receipts have fallen short of its outlays.  The trust fund balance from earlier years does not count as income during a budget year.  If income during any given year is less than the program’s expenses then it counts as a deficit. 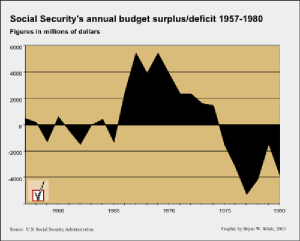 As Social Security has run a deficit many times, how can one claim that it has not added to the federal deficit?

A person might misspeak and mistake the term “deficit” for the term “debt.”  In talking about the latter, one could count the trust fund as an asset despite the fact that money invested in Treasury bonds is spent by the federal government.  The money the federal government owes to Social Security adds to the challenge of paying down the debt.  The House Democrats’ presentation on Social Security presumably represents a carefully crafted statement.  It is appropriate in these circumstances to stick to the term the House Democrats chose.

Is there a $2.7 trillion surplus in the Social Security trust fund? 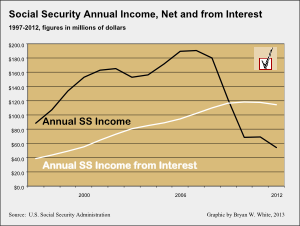 The House Democrat presentation on Social Security completely downplays the rapidly approaching depletion of the trust funds as well as the current shrinkage of Social Security income.

As shown on our graph, since 2010 Social Security has relied on interest income to avoid eroding its trust fund balance.  The end of the payroll tax holiday originally passed as part of the stimulus bill in 2009 will increase receipts, but the program remains on course to deplete its trust funds by 2033.

While it’s true that the trust fund carries a $2.7 trillion surplus, the surplus amount by itself gives a very incomplete picture of the health of the Social Security system.

“The Social Security program is healthy.”

“Since its inception, Social Security has paid for itself without adding a single dime to our national deficit.”

“In fact, today, Social Security has a $2.7 trillion surplus.”