Is the House abortion bill unconstitutional as Democrats claim? 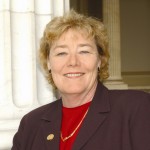 “It is unconstitutional, and it is dangerous to the health and safety of American women.”

The decision of House Republicans in June 2013 to pass a bill restricting abortion led to a common response from Democrats:  The bill is unconstitutional.

The response from the Democrats’ chosen spokesperson in the House, Rep. Zoe Lofgren (D-Calif.), was typical:

This bill imposes a nationwide 20-week abortion ban. It is unconstitutional, and it is dangerous to the health and safety of American women.

The constitutionality of the bill hinges on two general concerns.  First, the content of the bill.  Second, the nature of the constitutional right to abortion as originally described in the Roe v. Wade decision and later elaborated in other federal court decisions.

The House bill bans abortions at 20 weeks or greater:

(2)(A) Except as provided in subparagraph (B), the abortion shall not be performed or attempted, if the probable post-fertilization age, as determined under paragraph (1), of the unborn child is 20 weeks or greater.

The bill includes exceptions for the health of the mother and for cases of rape.  The health exception specifies life-threatening physical conditions while the rape exception requires that the rape is reported to law enforcement before the abortion procedure.

The Roe v. Wade abortion case permits legislative restrictions of abortion after fetal viability, the stage of development where a fetus can continue to develop and grow to maturity outside of the womb:

(a) For the stage prior to approximately the end of the first trimester, the abortion decision and its effectuation must be left to the medical judgment of the pregnant woman’s attending physician. Pp. 163, 164.

(b) For the stage subsequent to approximately the end of the first trimester, the State, in promoting its interest in the health of the mother, may, if it chooses, regulate the abortion procedure in ways that are reasonably related to maternal health. Pp. 163, 164.

(c) For the stage subsequent to viability the State, in promoting its interest in the potentiality of human life, may, if it chooses, regulate, and even proscribe, abortion except where necessary, in appropriate medical judgment, for the preservation of the life or health of the mother. Pp. 163-164; 164-165.

Paragraph (c) allows that the State may restrict access to abortion, even to the point of banning it, after fetal viability.   The Court established no hard date at which it counted a fetus as viable.

Medical science counted a fetus as viable at about 24 to 28 weeks during the 1970s, so the Supreme Court used that number to support its framework for legal abortion.  Thanks to medical advancements, fetal viability has changed over time so that a fetus may survive outside the womb earlier than 24 weeks.  However, barring a major medical breakthrough, limited fetal lung development will keep the potential for fetal viability at about 22 weeks.

H.R. 1797 clearly does not follow the fetal viability standard that comes to us from Roe v. Wade.   It would ban most abortions from 20 weeks of development onward regardless of viability.   In that limited sense, the House bill is unconstitutional.  Does that make the bill unconstitutional?

That issue isn’t so clear.

Some observers note that bills like H.R. 1797 appear to aim at prompting the Court to reconsider its viability standard in favor of the fetal pain standard.  If the Court changes its standard then the bill may pass constitutional muster.  The text of the Constitution no more speaks against the fetal pain standard than it speaks for the Roe Court’s fetal viability standard.  And the Roe decision does not prevent the later existence of an alternative standard.

The Constitution paints an extremely vague picture of the right to an abortion.  The Roe decision, in fact, has historically drawn much criticism from liberals on the issue of its legal grounding.

The constitutionally vague nature of the right to abortion forces Democrats like Lofgren to plan a delicate rhetorical balancing act.  Liberals tend to favor interpreting the Constitution as a “living” document, where its meaning is conditioned and modified by changing times.  At the same time, decisions of the Supreme Court receive deference in later rulings, a principle known as stare decisis.

Do Court precedents also feel the effects of the flow of time?  Unless Supreme Court rulings stand higher than the Constitution itself, decisions like Roe v. Wade appear vulnerable to reinterpretation according to changing times.  And without dependable interpretive principles, who can say whether a law is unconstitutional without seeing into the minds of the justices?

Justices may well regard the fetal pain argument skeptically because the evidence supporting it remains controversial.

In short, it isn’t at all certain that the House bill is unconstitutional.  Lofgren’s appearance of certitude comes across as an exaggeration meant to rally abortion rights supporters against the House bill.