John Boehner and the U.S. Chamber of Commerce’s survey stats

“Small business owners ‘say the law makes it harder for them to hire new employees.’

‘77% say the health care law will make coverage for their employees more expensive.'”

Speaker Boehner accurately represents the most recent results of the U.S. Chamber of Commerce’s small business survey, but we sound a note or two of caution. 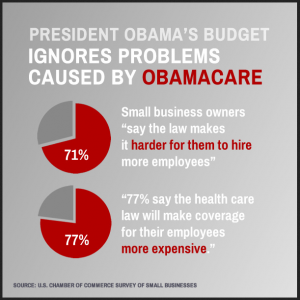 We intermittently visit the websites of various political figures and organizations hunting for newsworthy factoids to put to the test.

On April 15 we found one at the website of Speaker of the House John Boehner.  It said “President Obama’s Budget Ignores Problems Caused by Obamacare.”  We deemed that statement a potential judgment call requiring a good bit of work for verification.  But the statements representing the alleged problems of ObamaCare looked easily verifiable.  We wondered especially whether the infographic used dated or obsolete information.

We located a year’s worth of the quarterly surveys and had a look at the data.  Boehner’s chart matches the numbers from the first quarter survey for 2013.

It’s easy to confirm that the numbers in Boehner’s chart have perfect counterparts in the U.S. Chamber of Commerce’s quarterly small business survey.  It’s tougher to figure out the significance of the numbers.

The chart makes both factoids subordinate to the claim that President Obama’s budget does not address problems stemming from ObamaCare.  Yet one could argue that budget measures designed to make hiring easier address the problem businesses perceive of a more difficult hiring environment, for example.

As noted above, we think the main point of the chart is too broad and complicated to test effectively.  Perhaps it’s best classified as an opinion.  But we can close the gap some by looking at whether the two factoids serve as examples of legitimate problems associated with the health care law.  And we can prepare for that by looking at the context of the survey and considering its limitations.

This version of the question about the health care law’s effect on hiring appears in the 2011 report for the first quarter.  Click image for larger view.

Boehner’s chart relies on one measure:  the opinions of a sampling of small business owners.  It’s not necessarily a poor measure.  Small business owners are likely to have some kind of handle on the variables that affect their businesses.  But at the same time the health care law’s complexity all by itself may help create the impression that costs will rise.  A story published in 2012 in The New York Times cited the complexity of the law as a barrier while repeating the Government Accountability Office’s conclusion that the tax incentives for small business are too small:

So why has the credit fallen short of expectations? The G.A.O. concluded that the credit was too small to sway business owners. Moreover, it said, claiming the credit is a task so complicated as to discourage many companies from trying.

At the bottom line, the ACA does not give business owners something for nothing.  Providing insurance for employees will tend to add to employers’ costs even with the health law’s incentive programs.

Does this mean making insurance coverage available for employees more expensive for the business owner or for the employee under the ACA?

If we had access to the survey question then perhaps we could answer that question definitively.  It probably refers to the cost to employers, since it makes more sense to ask employers about their costs.

Employers who do not now offer insurance will pay more under the ACA.  But what about small business owners who already provide insurance?  The ACA has some features intended to cut costs for employers, such as planning competitive insurance marketplaces to allow small businesses to share the purchasing advantages of large businesses.  On the other hand, some features of the ACA increase costs to employers, such as the ACA’s mandates for minimum insurance coverage and the requirement that insurance companies end the practice of denying coverage for pre-existing conditions.

We’re not sure whether the ACA by itself raises or lowers health insurance costs for small businesses owners who already offer it.  But the rate increases expected in 2013 for the employer insurance market, reported in a survey by the Kaiser Family Foundation, may help argue that the ACA will increase costs overall:

Seven percent represents a substantial increase.  The average increase for 2012, when fewer of the ACA’s rules were in effect, was near 4 percent.  On the other hand, the ACA includes provisions that direct insurance companies to refund a portion of the premium if less than 80 to 85 percent of premiums go toward specified aspects of patient care.  Refunds may prove large enough to shrink what looks from the front end like a large increase.

As with the former issue, a survey of the opinions of small business owners is not necessarily a bad measure of what will happen.  Still, their expectations may prove wrong.  Perhaps some who expected the ACA to raise their costs will see their costs drop.  And perhaps some who expected prices to drop will see the opposite.  Using survey data to address both issues creates a logical booby trap for those who assume that the small business owners surveyed are correct in their expectations.

Regardless of whether the small business owners have accurate perceptions of the health care law, their perceptions may affect their behaviors in running their businesses, such as hiring new employees.

“[71 percent of] Small business owners ‘say the law makes it harder for them to hire new employees.'”

“‘77% say the health care law will make coverage for their employees more expensive.'”

By themselves, the two statements stand as suitably clear and true.  In service to the larger point about President Obama’s budget, it’s important to figure out the specific relevance of the two statements.  The latter step is less clear and puts us at risk for flawed reasoning.