Minimum wage increase not for teenagers and flunkies?

“Myth:  Raising the minimum wage is for flunkies and teenagers.”

—The Democratic National Committee, ~Jan. 2014 on its “Your Republican Uncle” website

The DNC’s “Your Republican Uncle” website produces yet another garbled and misleading myth claim.

The Democratic National Committee sponsors a website called “Your Republican Uncle.”  The DNC intends the site to offer rebuttals to common Republican talking points.  The second item on its list of gender issues says it’s a myth that raising the minimum wage is for “flunkies and teenagers.”

The site offers the following explanation:

Women are more likely than men to find themselves working a minimum wage job . That’s part of why President Obama favors an increase in the minimum wage — because supporting women and families strengthens the middle class.

As with the previous item on the DNC’s list of gender issues, this item has a supporting link to the left-leaning Center for American Progress.  The linked article, “Women Are the Biggest Losers from Failure to Raise Minimum Wage,” focuses primarily on the number of women earning the minimum wage, not on the number of low-skilled or teenaged workers earning the minimum.  One paragraph touches on the issue directly:

About 60 percent of women earning the minimum wage are aged 30 or under by the reckoning of the Center for American Progress.

We think the DNC has a problem with its line of evidence.  Even if 100 percent of women making minimum wage are over age 30, how do we know they’re doing something more than unskilled work?  The data from the Center for American Progress do not address the key issue.

Worse for the DNC, the data from CAP suggest that most women making the minimum wage are young—30 or younger—and likely on that basis to lack the skills justifying a higher rate of pay.  Some of the younger workers doubtless have more advanced job skills, but neither is there any rule that older workers necessarily have more advanced skills.  Of the 40 percent of women over age 30 the CAP says earn minimum wage, what percent do unskilled labor? 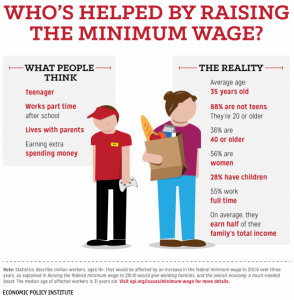 Are we even looking at the right question?

As we started looking at research on minimum wage demographics, we ran into research that prompted us to reassess what the DNC was trying to say.  The material from the CAP emphasized that raising the minimum wage would also benefit workers making more than the minimum, calling it a “spillover effect.”  A left-leaning think-tank, the Economic Policy Institute, has published a study focusing on demographics that would benefit from a minimum wage hike.

The spillover effect results in raises for workers making more than the minimum wage yet less than the new proposed minimum.  EPI also anticipates a ripple effect of wage adjustments boosting wages for employees making more than minimum wage.  Adding these groups to the set of those receiving a direct benefit from a minimum wage boost changes the demographics some.  Probably fewer teenagers and more mature workers receive a benefit.  However, EPI does not address the DNC’s suggestion that low-wage workers aren’t low-skilled workers.

We’re happy to extend charitable interpretation to the DNC.  It’s a legitimate point that raising the minimum wage results in benefits for some who are not now making the federal minimum wage.  At the same time, we have to point out that the DNC did not make any clear effort to emphasize that point. 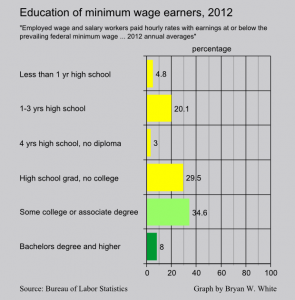 The Bureau of Labor Statistics

The United States Bureau of Labor Statistics provides some data on the education of minimum wage earners.  About 57 percent of those making the federal minimum wage or below have a high school education or less.

Still, the BLS numbers tentatively support the proposition that most of those making the federal minimum wage work at unskilled jobs.

Proponents of raising the minimum wage, including EPI, like to present the policy positively, acknowledging little or no downside.  It is said the minimum wage hike will help the poor, narrow the gap between rich and poor, stimulate the economy and even create jobs.

Is there a downside?

Critics contend raising the minimum wage will increase unemployment.  Kevin A. Hassett and Michael R. Strain of the American Enterprise Institute made the point in a 2013 op-ed published in the Los Angeles Times:

The case against raising the minimum wage is straightforward: A higher wage makes it more expensive for firms to hire workers. How big an effect does this have on the job market? Economists debate this. But no one argues that increasing the minimum wage increases the number of unemployed workers who find jobs. In the end, the trade-off is clear. People who keep their jobs get more money; those who lose their jobs, or fail to get new ones, suffer.

When the CBO says the share of employed low-wage workers would probably fall slightly, this is what it means:

Thousands of workers, perhaps even hundreds of thousands, would lose their jobs.  There’s a downside to raising the minimum wage.

“Myth:  Raising the minimum wage is for flunkies and teenagers.”

Interpreting the DNC charitably presents a challenge.  If we assume the DNC tries to say raising the minimum wage isn’t entirely for flunkies and teenagers we run into a problem of ambiguity.  What if flunkies and teenagers gain 99 percent of the benefit from a minimum wage increase?  Wouldn’t the Republican uncle have a point?  Our data suggest the number is pretty high, probably more than half. Interpreting the DNC’s point charitably places its literal claim in a poor light, indicative in this case of a black-or-white fallacy.  The Republican uncle has a point in saying the minimum wage is an entry-level rate of pay fit for teenagers and unskilled workers, and the DNC failed to answer that point.  The DNC’s argument suffers from ambiguity and coherence problems.