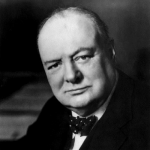 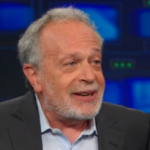 Churchill probably didn’t say it, but Reich uses an acceptable method for handling the uncertainty.

A Facebook post led us to investigate Robert Reich’s recent appearance on “The Daily Show with Jon Stewart.”  Reich is an economist, a liberal, and serves as Chancellor’s Professor of Public Policy at the University of California at Berkeley.

During the interview with Stewart, Reich said:

As Winston Churchill reputedly said, “Americans always do the right thing eventually, after they’ve exhausted all other alternatives.”

Reich says Churchill reputedly said it.  Did Churchill say it?

We looked at Reich’s television appearance because a Facebook post advertised a “huge lie” repeated by those who are well off.  We were curious about the quotation because Churchill tended to view the United States favorably, though of course that in itself does nothing to guarantee that Churchill could not have said it.

We quickly found ourselves working a previously blazed trail.  The Quote Investigator looked into the quotation, found a pattern of missing primary source attribution and contacted an expert on Churchill who confirmed that the quotation was missing from writings by and about Churchill:

Historian and top Churchill quotation expert Richard Langworth explored this saying and was unable to find any instances of the phrase in Churchill’s writings or in the memoirs of his colleagues as noted in “Churchill by Himself: The Definitive Collection of Quotations”. 10 Langworth also indicated, however, that he thought the words were compatible with the sentiments that Churchill sometimes felt.

Langworth, in his book “Churchill by Himself: the Definitive Collection of Quotations,” even called the quotation “likely” given Churchill’s feelings toward the United States during World War II, but his book offers very weak evidence supporting that view, referring to a quotation by Churchill saying the bigger the idea the more wholeheartedly Americans embrace it.  Churchill remarks “It is an admirable characteristic, provided the Idea [sic] is good.”

We doubt that evidence can bear the stretch required of it to support the quotation’s authenticity.  The Quote Investigator explored some plausible alternate origins of the quotation.  It’s worth reading.

So the quotation is something Churchill might have said, perhaps to humorously chide Americans for failing to do the right thing promptly.  But it lacks the type of supporting evidence we should expect for a quotation attributed to a famous person.

Why would Reich think the quotation came from Churchill?  That’s the easy question to answer.  The quotation is very commonly attributed to Churchill, and the list of sources making that attribution includes some impressive names.

Though we think Churchill probably does not deserve responsibility for the quotation, Reich uses a term that properly reflects uncertainty about its origin.  It’s true that the quotation “reputedly” came from Churchill even if he never said it.

We see no reason to suppose Reich tried to subtly mislead people by invoking Churchill’s name.  It’s a memorable quotation that helps Reich make his point.